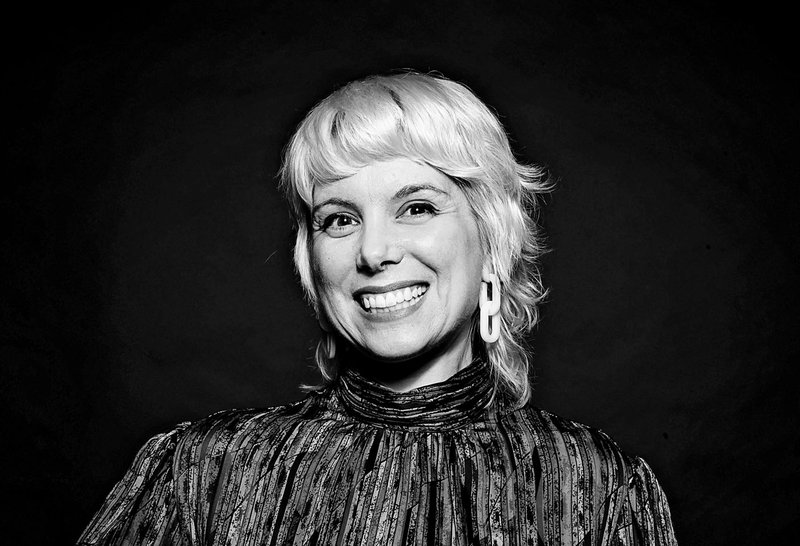 Photo courtesy: Meredith Mashburn "When I graduated with my arts journalism master's in 2003 I thought I needed to be in NYC, LA or another huge city so I could pursue a career as an arts and culture journalist," Katy Henriksen says. "Turns out that I can be right here at the center of an incredible music and arts landscape that's only just begun."

Some know her as the voice behind NPR affiliate KUAF's "Of Note." Some know her as the co-founder of the Trillium Salon Series -- a concert series tearing down the boundaries of classical music that literally began in her living room. Some know her as an arts and culture journalist and musician herself. But however you know Katy Henriksen, you still may not know all the exciting moves she's made in service to the Northwest Arkansas arts scene.

[Don't see the podcast above? Click here to listen to Jocelyn Murphy talk with Henriksen about the regional arts scene, what to expect from Trillium during the upcoming year and more.]

Q. How have you seen the Northwest Arkansas musical landscape change since before you moved to New York, and specifically in the years since you've been back?

A. The Northwest Arkansas music landscape has massively transformed from when I grew up here and went to college here in the late 1990s. I have fond memories of classical concerts at the Stella Boyle Smith Concert Hall at the UA Music school. I like to say that I was on the stage before I was even born since my mom played her senior bass recital pregnant with me on that stage. The university always brought in amazing musicians and the Walton Arts Center did too. But in college I spent a lot of time at the all-ages music venue Clunk Music Hall and went to a bunch of house shows in crumbling little houses near campus. Once I turned 21 I loved catching shows at JR's Lightbulb Club. I also have to give a shout-out to Coffee House, which was a Thursday night college thing underneath Brough Commons, the main dining hall at the university. I was the lead singer in a shoegaze band that performed there called the Secret 17ths. There's no JR's Lightbulb Club or Clunk Music Hall now, but DIY venues like Backspace and bars like Smoke and Barrel have stepped in. And the shows at George's are increasingly diverse. The university has grown, Walton Arts Center is bringing in top notch acts and now with the AMP, plus music at Crystal Bridges and soon The Momentary, plus so many festivals like Roots Fest, we have such a wealth of music here. It's an invigorating time to watch this transformation from sleepy college town that internationally touring acts always said they loved to stop in (I interviewed a number of those musicians who spoke so fondly of this little pocket in the Ozarks) to becoming known as a live music destination. When I graduated with my arts journalism master's in 2003 I thought I needed to be in NYC, LA or another huge city so I could pursue a career as an arts and culture journalist. Turns out that I can be right here at the center of an incredible music and arts landscape that's only just begun.

Q. You've experienced some major professional developments this year. Can you give me a brief outline of everything that's happened?

A. This year was a sea change for me professionally. I made the difficult decision to step down as host of my classical music show "Of Note" on KUAF, which I'd had for eight years, to pursue huge projects including founding a nonprofit organization, launching a nationally distributed podcast and building my own public relations firm for artists.

Trillium Salon Series, which started in my living room as a concert series dedicated to re-imagining the way we experience classical, new and experimental sounds, has grown into its own nonprofit organization. We just received the IRS letter in December. In March we'll have guitarist/composer Thomas Echols as our first artist-in-residence. While he's here he will also teach a composition workshop and perform a Trillium concert. I've dreamt of having an artist-in-residence program ever since I moved back to Fayetteville [from New York City] in 2008.

My podcast has been in development for about a year now with the Critical Frequency Podcast Network, picked by Ad Week as network of the year. The network was founded by my former colleague at Venus Zine, a magazine that focused on women in music. Called "Sound Off," it will feature interviews with musicians and composers whose sound doesn't fit in anywhere because it blurs boundaries. The first season will include Pulitzer Prize-winning composer Caroline Shaw, as well as Shara Nova -- whose musical project My Brightest Diamond, straddles electronica, indie rock and classical. I absolutely love interviewing, so the format is about in-depth conversations -- think Terry Gross-style "Fresh Air" -- and with music that gets lost because it isn't easily labeled.

The third component is with public relations. With Northwest Arkansas' rapidly growing arts sector, I saw a need for public relations services expressly for independent artists and musicians. In addition to signing my own personal clients I also, as of August 2019, direct publicity for the composer-run new music label New Amsterdam Records based in NYC. The label has a partnership with Nonesuch (home to Wilco and Kronos Quartet) and received four Grammy nominations this year in the World Music, Composition, and Chamber Ensemble recordings. They're one of my favorite labels (and home to Caroline Shaw, who I mentioned above as a guest on my podcast), so it's an absolute trip that I'm now heading up their publicity.

Q. Why did it feel like the right time to leave "Of Note?" What were you most excited for and what did you most fear in walking away from something you poured so much into?

A. I loved hosting "Of Note." And I loved connecting with listeners and bringing new sounds directly to them, as well as having such an amazing platform to highlight music and the arts through my interviews in the show. I run into to listeners all the time who are sad that they don't hear me on the air anymore. KUAF itself is in a huge transition after the founding station manager Rick Stockdell announced his stepping down, meaning KUAF was seeing a sea change of its own.

So, it felt like it was the right time for me to look ahead at my podcast and dream big for Trillium -- two projects that I wanted to grow and fully form -- which would have been impossible if I kept a full time role as music director. It felt a lot like jumping off a cliff, but as soon as I did I ended up landing with New Amsterdam Records and I had the bandwidth to grow Trillium into its own organization, as well as look towards cultivating a nationally recognized podcast and focus on pitching stories to national outlets. The scariest thing was leaving behind a full time salaried job with benefits. I have to trust that this diverse array of projects will bring in the income I need to live.

Q. How do you see your role, or what do you aspire for your role to be, in the NWA music community?

A. I want to both cultivate community through music and elevate the musical scene of Northwest Arkansas, particularly for music seen as "concert hall" music such as classical, new and experimental, as well as participate as a music journalist on a national level. I want to be a connector who helps composers and musicians find each other and become collaborators. I want to elevate local musicians operating in that scene to a wider audience. I gave a TEDx talk in 2018 and I loved a couple lines from that, including the way I describe music as "the great resonating force that connects us all."

I was lucky enough to be born into a family of classical musicians, so it was all around me. Playing "Chopsticks" on a harpsichord was normal for me. Bach organ fugues played alongside the Beatles was also totally normal for me. I realize now that a lot of people don't get that type of exposure to music, nor do they have the chance to connect deeply with it now that we're in the streaming era. I want to connect people to that "great resonating force," which then connects them to others in the community and experience music that helps us understand what it is to be human.

Q. One of the purposes for your music series Trillium Salon Series is that the experiences take place in intimate and unusual settings. What is the significance for you from both the listener's and the performer's perspective of gathering together and consuming art in this type of setting?

A. Unlike traditional concert halls, where performers are up on a stage with bright lights and audiences are down seated in rows in the dark, the performer and audience are interacting. The experience is active instead of passive. The type of sounds I love to highlight don't translate well into rowdy bar settings, either. I also want everyone to feel welcome. I know a lot of folks who think classical is for the elite upper crust, but it really isn't. You don't have to be rich or highly educated to enjoy symphonic sounds. Through these experiences, "art music" is demystified.

Q. What does the next five years look like for you?

A. In addition to growing the Trillium concerts, I'd love to have more artists-in-residence and workshops. I've long been obsessed with the independent art school Black Mountain College, which was around in 1940s North Carolina and brought together Bauhaus greats Josef and Annie Albers with avant-garde giant composers John Cage and poets such as Robert Creely. I'm also wanting to grow Trillium to include arts media and education, as media literacy, including arts media literacy are seminal for having a vibrant arts community. I hope my podcast grows and perhaps turns into a syndicated program (if those will even exist in five years, haha) to reach as many listeners as possible. I also love writing literary nonfiction and as an essayist, so I'd love to do a lot of that. It's my favorite thing to write, but I always push it aside for work that pays.