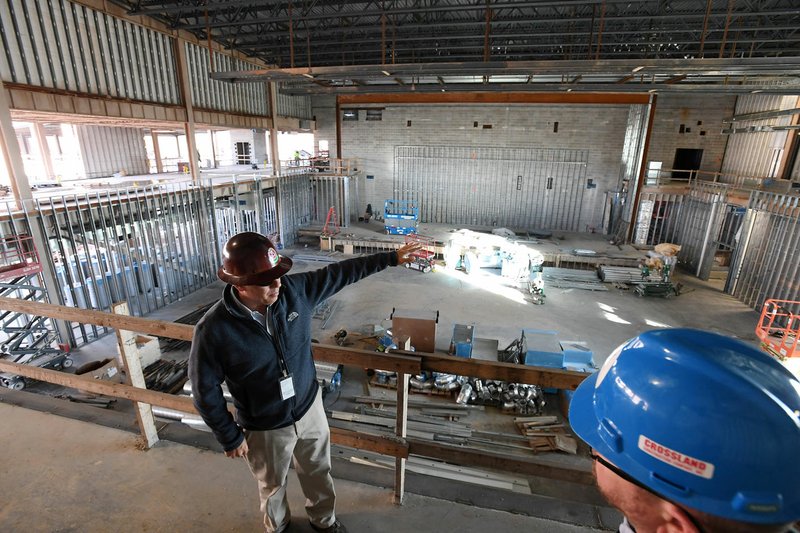 Sam Palmer (left), director of facilities, and Lynn Yandell, director of IT, marketing and communication lead a tour Wednesday of the addition at the Fayetteville Public Library. (NWA Democrat-Gazette/J.T. Wampler)

FAYETTEVILLE -- People will be able to learn to drive a forklift, record a professional-grade studio album, take dance lessons or simply grab a book at the expanded library by October.

What's built so far paints a picture of the breadth and scale of what people will experience, Executive Director David Johnson said.

For more information on the expansion, go to the website for the library’s capital campaign: beyondwordsfpl.org.

To see the library expansion construction so far, go to nwadg.com/video.

Fayetteville’s Public Library board’s next meeting will be 4 p.m. Monday in the Ann Henry Board Room.

"Being there and looking at it, seeing those spaces -- you just go, 'Man, this is awesome,'" he said. "I don't think this community knows what we're about to give them."

Library administrators have a goal to open the renovated building and the 82,500-square-foot addition Oct. 9, 16 years after the original Blair library opened in 2004. The addition will nearly double the size of the 88,000-square-foot main library.

About $26.9 million of the nearly $50 million cost of construction is coming from bonds paid through a 2.7-mill increase in property taxes city voters approved in 2016. Another $23 million will come from an ongoing fundraising campaign.

Renovation of some offices and the circulation desk on the third floor will begin next month. Construction crews will start cutting a hole in the south wall of the second floor to connect to the addition beginning in April.

The library's main entrance and cafe will remain open during the renovation on the third floor, which should take about two months, Johnson said. Employees who work on the second floor will move upstairs to the renovated space, he said.

The goal is to keep the library open while all the work is going on, Johnson said. Both buildings should be complete and connected by August. Staff will spend the time between then and Oct. 9 putting in furniture and equipment and getting everything online.

Jay Graham, who lives on School Avenue across from the heaviest construction activity at the expansion, said the clangor hasn't bothered him. Early mornings aren't ideal because he can hear the noise through the older windows of his apartment, but it's no worse than the other sounds he hears coming from anywhere else downtown, he said.

"I don't mind parting with a few months of peace for the greater good," Graham said. "It'll probably be really cool once it expands, and I'll be close to a new feature."

Providing educational and technological resources to low-income or homeless residents who wouldn't otherwise have such access serves that greater good, Graham said.

Despite living next door, he doesn't visit the library much. However, he said some of the new features one might not associate with a library intrigued him.

"As long as it doesn't lose a lot of its charm, there's nothing wrong with people having more stuff to do or more resources," Graham said.

A spiral staircase from the third floor to the second floor will serve as the linchpin between the main library and the addition. The collection of books, magazines, DVDs and audiobooks will expand from about 300,000 to 400,000. More electronic devices will be available to people. There will be isolated and open study and reading spaces.

A deli with a teaching kitchen and outdoor seating will face School Avenue, on the first floor of the addition. Brightwater: A Center for the Study of Food will host a culinary program for high school students.

A 700-seat multipurpose space will have a 24-by-60-foot stage, retractable seats, and a catwalk overhead for rigging and a control panel. An area for gatherings before events will be between the space and an outdoor green space abutting West Avenue.

The addition will boast an innovation center equipped with a professional-grade studio for audio, video and photography work and a robotics lab. People also will have a simulator to train on how to drive tractor-trailers, forklifts and backhoes. A virtual-reality lab will allow people to create and explore three-dimensional renderings.

The top floor of the addition will have a hardwood floor for dance, yoga or martial arts classes. Children will have areas for learning and exploring on both levels of the expansion, doubling the amount of their current space. Teens will have their own space on the expansion's second floor.

The fiction section will move to what is now the downstairs of the main library. There will be a new book conveyor encased in glass people can watch. Nonfiction and reference sections will cover most of the upstairs portion of the main library, along with a genealogy section.

All of the new features mean library staff will have a lot to learn, Johnson said. New staff will be hired as department heads figure out who will be needed where, he said.

Brianna Maye moved to the city about a year ago from Portland, Ore., and said she was excited about some of the environmentally friendly aspects of the expanded library, such as planned water features and vegetation along School Avenue. The workforce training equipment should help people find jobs, she said.

"I think it makes sense to have more than just books at a library," Maye said. "I think it's an area to cultivate learning, and that goes beyond having just the physical books."

People who want to read a book or do research will still be able to, albeit at a larger scale, said Sam Palmer, facilities manager. There'll be more material and ways to check them out, and more computers set up, he said.

"We are providing these core services at a magnified level so that more people from all walks of life can come and participate," Palmer said.

Library staff and architects toured libraries across the globe before designing the new space. Lynn Yandell, director of information technology, said the amount of state-of-the-art technology available for free to people will blow their minds.

"I can say, firmly, there is nothing like it," he said.

Although the building will allow people to flow through it intuitively, being able to enjoy each section in isolation was at the forefront of the design, Yandell said.

"A heavy metal band could be in there recording an album, and you could be having a nice, quiet Christmas story time next to it," he said.