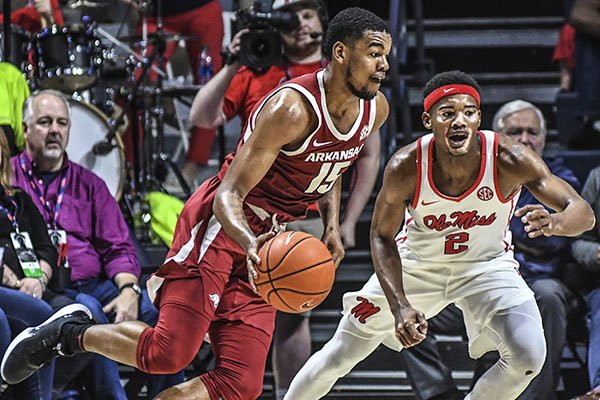 OXFORD, Miss. -- Ole Miss held University of Arkansas guard Mason Jones almost seven points below his scoring average, but the 6-5 junior found other ways to hurt the Rebels -- primarily with his passing.

Jones, who scored 13 points after coming into the game averaging 19.8, had a career-high 9 assists as well as 6 rebounds and 3 steals to help the Razorbacks beat the Rebels 76-72 on Saturday at The Pavilion.

Six of Jones' assists came on three-point baskets by Isaiah Joe, who led the Razorbacks with 34 points and was 7 of 13 from beyond the arc.

"Mason can do everything," Joe said. "He can rebound, he can score, he can pass, he can get steals. He's just an all-around player."

Jones, who also had two assists on baskets by Desi Sills and an assist on a dunk by Adrio Bailey, said he was happy to be more of a distributor than a scorer -- especially when it came to getting the ball to Joe.

"That was just what the team needed tonight," Jones said. "Zay was going, and we want to keep feeding him.

"I knew I had a lot of attention on me, so when I drove, I was just looking to find Zay and Desi and everybody else."

"We put the ball in Mason's hands so much," Musselman said. "Usually we put it in his hands to be a scorer, but tonight he respected the defense and made incredible passing plays and incredible unselfish plays in not trying to force things.

"Isaiah gets some good looks, too, because Mason causes some alertness with the defense. Those two guys just kind of feed each other."

Jones' previous high for assists was seven against Indiana last season when the Razorbacks beat the Hoosiers 73-72 at Walton Arena. He had a season-high six assists in the Razorbacks' 71-64 victory over Indiana on Dec. 29.

The Razorbacks had a player score 30-plus points for the fourth game this season and second time by sophomore guard Isaiah Joe, whose 34 points at Ole Miss matched his career high against Florida International last season. Joe scored 33 against Texas Southern on Nov. 19.

Razorbacks junior guard Mason Jones scored 30 points in the season opener against Rice on Nov. 5, then a career-high 41 against Tulsa on Dec. 14.

Arkansas now has 125 games in which a player has scored 30 or more points, with 48 players accomplishing the feat, including four times by Jones and three by Joe.

Day's 43-point game also is the most by an Arkansas player against an SEC opponent.

The Razorbacks' 76-72 victory over Ole Miss was the first Arkansas game with that score since the Hogs beat Duke 76-72 on April 4, 1994, to win the 1994 national championship, according to Hogstats.com.

"I thought the free throws down the stretch were huge," Coach Eric Musselman said. "It also helps when the right guys are shooting them."

The Razorbacks needed a big game at the line because Ole Miss hit 25 of 26 free throws, including Breein Tyree going 9 of 10.

Isaiah Joe continued his stretch of big-scoring second halves for the Razorbacks when he had 26 of his 34 points in the second half at Ole Miss.

Over the past five games, Joe has scored 86 of his 109 points in the second half.

"Most of my second halves this season have been a lot bigger than my first halves," Joe said. "Being able to have one that explosive [as Saturday night's] was good to help us get the win."

The Arkansas-Kentucky game at 3 p.m. Saturday at Walton Arena will be televised on ESPN. The game had been scheduled for either ESPN, ESPN2 or ESPN.

Dick Vitale, the longtime ESPN color analyst, is scheduled to work the game.

Arkansas senior graduate transfer forward Jeantal Cylla hit 1 of 2 free throws with 12:35 left in the first half for his first point since Nov. 22, when he scored seven points and played 14 minutes in the Razorbacks' 77-56 victory over South Dakota.

In 25 minutes over eight games since then, Cylla had gone scoreless prior to Saturday.

Cylla struggled offensively in his 11 minutes off the bench in the first half when he was 1 of 4 on free throws and missed his only two field goal attempts -- a layup and an open 15-foot jumper.

Coach Eric Musselman chose not to play Cylla in the second half and instead gave Reggie Chaney a chance. Chaney didn't attempt a shot in his four minutes, and had a turnover and a foul.

Vanderbilt, which plays at Arkansas on Wednesday night, will be without star sophomore Aaron Nesmith against the Razorbacks.

Nesmith, a 6-6 sophomore who leads the SEC in scoring at 23.0 points per game and three-point shooting at 52.2%, has a foot stress fracture and likely will miss the rest of the season, according to multiple media reports.

Mike Anderson and Darious Hall, the former Arkansas coach and player, were back together in Madison Square Garden on Saturday.

Anderson now is the coach at St. John's, which beat Hall and DePaul 74-67 in a Big East matchup.

Hall, a 6-6 sophomore from Mills who redshirted last year after transferring from Arkansas to DePaul, had 11 points and 5 rebounds in 22 minutes off the bench.