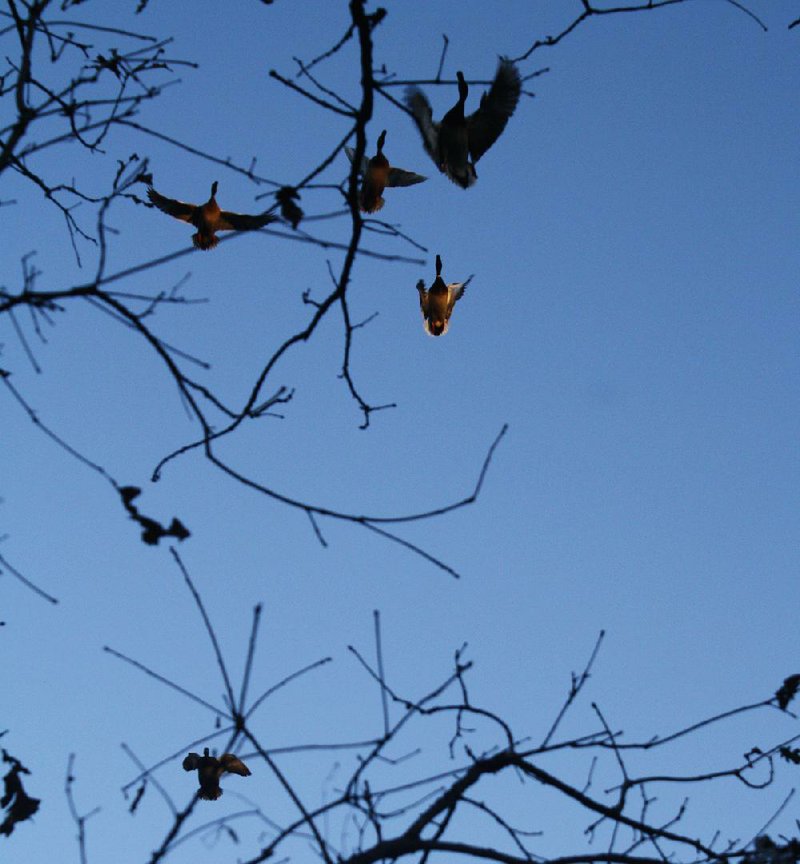 Mallards fluttering through the trees was an ongoing highlight of the author’s hunt Monday with Bill Henry and Jim Rice.

Dr. Bill Henry and I are the best double-play combination in duck hunting.

We combined for a bang-bang play to end a game Monday that is worthy to appear on SportsCenter.

It was the last duck of a hunt that also included Jim Rice, Henry's frequent hunting partner. Henry and Rice had already shot their limit of four mallards each. I had one to go. Henry nearly blew himself out of breath trying to get a flock of mallards to light in our hole. That last sequence started out with four or five ducks. As often happens, four or five more joined them. Ducks love a crowd, so a dozen more joined that group, followed by a dozen more.

A group of ducks that large is notoriously indecisive. They have to look at something way over there, and then something else way over there. Hunters a mile away shoot and make the ducks jittery. They flare and disperse, but then they reassemble, and the dance resumes.

For me, the dance began at 2:45 a.m., when I woke without benefit of an alarm. It was a good thing because I failed to activate the alarm on my smart phone, which was set for 3 a.m. It just meant I could go at a more leisurely pace.

Henry extended the invitation by text message the day before. He said he couldn't make any guarantees, but he said we might have a chance at a good hunt.

I had only one really good duck hunt in 2019. It was on the last day of the season in these same woods with Henry, Rice and Sam Casalli. I'm not superstitious, but I am nostalgic, so my hopes were high.

In other words, leave the cameras and the camera attitude at home.

After coffee and conversation, we made the short boat ride to an opening in the flooded timber.

"We'll stand against these trees right here," Henry said. "They'll come in right in front of us and have a nice finish."

Mallards arrived shortly after legal shooting time. They finished in the hole precisely as Henry predicted. He and Rice bagged several right away.

"Why aren't you shooting?" Henry asked.

"I'm waiting for the right shot," I said.

I really was. I didn't have a proper camera, but I could still shoot photos on my iPhone.

Henry was at shortstop, and I was at second base. Our "catcher" was Tucker, a rookie black Labrador retriever. He has a lot of raw talent, but he is error prone. Henry grades him after every hunt, and he said he usually ends up with a D-plus or C-minus.

His final error led to the game-ending double play.

With several dozen ducks circling, one finally committed to landing.

I folded the drake with one shot. It kicked upside down for a few moments, and then righted itself. With its head high, it swam away. Henry sent Tucker to retrieve it, but Tucker lost the mark and started swimming in Figure 8s.

Fearing a getaway, Henry and I waded after the escaping mallard as Tucker swam circles around us. Problem was, Henry left his gun hanging on his tree.

It was soon evident that we weren't going to catch the mallard.

"I don't have any shells," I replied.

Henry was momentarily dumbfounded, but he quickly recovered and yelled, "Here, catch!"

Henry threw me a cartridge. I caught it in a gloved hand and jammed it into the action in one fluid move. I shot. The duck collapsed and flapped its wings meekly. And then it miraculously recovered.

Henry threw me another shell which I caught and fired. What was surely a dead duck recovered yet again and swam ever faster.

In his excitement, Henry threw the next two shells short into the water.

"This is my last one," Henry yelled.

The throw and the catch were perfect. I got down and made the tag in front of the slide.

Chests heaving, Henry and I gave each other an approving nod. We were too breathless to talk, and Rice was breathless from laughing.

Tucker finished the play with an enthusiastic retrieve.

The boxscore showed that Henry and I each got four greenheads. Rice got three greenheads and a mallard hen. 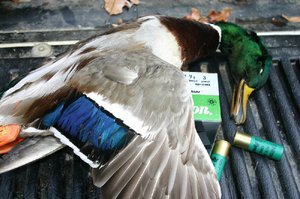 Photo by Arkansas Democrat-Gazette/Bryan Hendricks
The drake mallard is the unofficial symbol of an Arkansas winter.