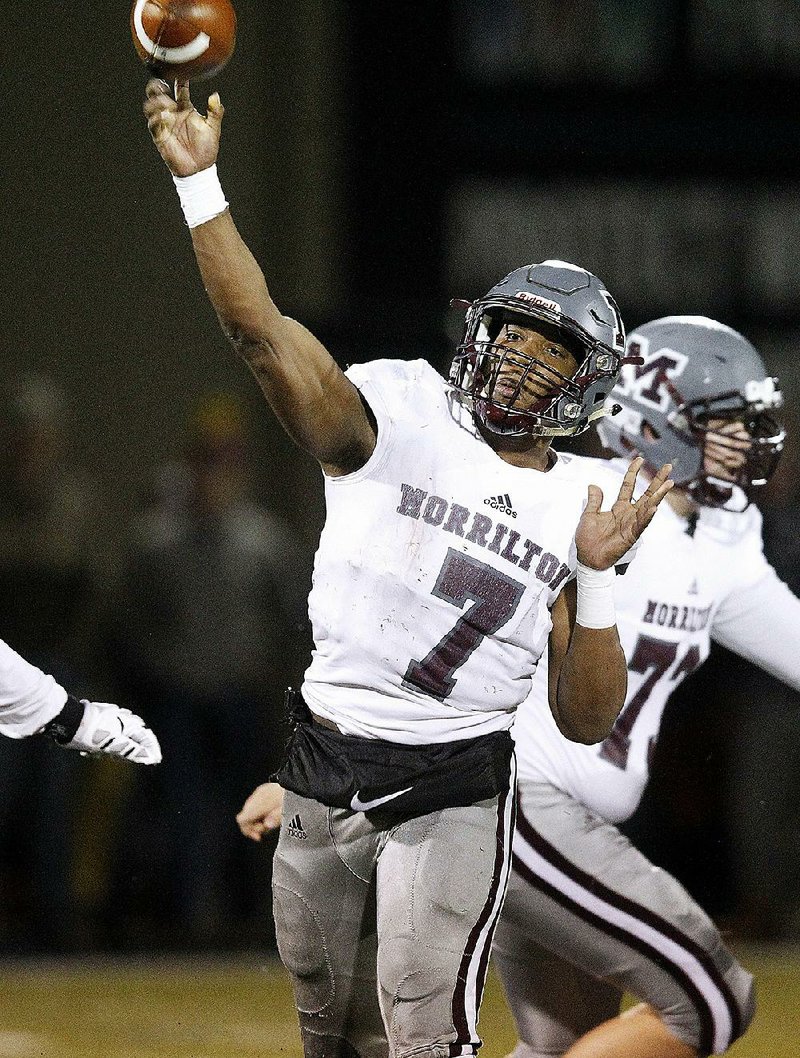 Morrilton senior quarterback Jacolby Criswell led the Devil Dogs to the Class 5A semifinals in 2019. Criswell, who has signed with North Carolina, threw 27 touchdown passes and ran for 24 scores - Photo by Thomas Metthe

There wasn't a more electrifying player in high school football in the state in 2019 than Jacolby Criswell.

The Morrilton senior dual-threat quarterback stood out, completing 206 of 316 passes for 2,869 yards with 27 touchdowns and 5 interceptions, and rushing for 1,282 yards and 24 scores on 171 carries.

Criswell at a glance

HIGHLIGHTS Completed 206 of 316 passes for 2,869 yards with 27 touchdowns and 5 interceptions. Also rushed for 1,282 yards and 24 scores on 171 carries. … Helped lead Morrilton to Class 5A state semifinals, where it lost at Pulaski Academy. … Signed with North Carolina in December.

Morrilton advanced to the Class 5A semifinals, where it lost to eventual state champion Pulaski Academy.

Criswell, who signed with North Carolina in December, is the Arkansas Democrat-Gazette's All-Arkansas Preps Offensive Player of the Year for the 2019 season.

The Devil Dogs' signal-caller accounted for 51 touchdowns despite dealing with injuries to his ankle and shoulder early in the 2019 season.

"Those couple of injuries weren't going to take me away from my senior year," Criswell said.

Morrilton Coach Cody McNabb credited Criswell for not only the way he played, but how he was able to overcome his injuries.

"I thought he showed incredible toughness this year," McNabb said. "We knew he was talented. He's got elite arm talent and he's so dangerous, too, with his legs.

"I was extremely proud of him, the team and the way they performed this year."

Criswell was rated a four-star quarterback by ESPN, Rivals and 247Sports. He originally committed to North Carolina in June and stuck with his commitment despite a recruiting visit from new University of Arkansas Coach Sam Pittman in December.

His shining moment of the 2019 season may have been the Devil Dogs' 45-14 rout at Texarkana in the Class 5A quarterfinals on Nov. 22.

In just one half, Criswell was outstanding, accounting for six touchdowns to help the Devil Dogs lead 45-7 at halftime. He finished with 181 rushing yards and 5 touchdowns on 13 carries and went 7-of-10 passing for 74 yards and a touchdown.

A week before in the Class 5A first round at Valley View, Criswell rushed for 242 yards and 3 touchdowns on 20 carries and completed 14 of 22 passes for 166 yards with 2 touchdowns and no interceptions in a 37-27 victory over the 5A-East Conference champions.

"It was amazing," Criswell said. "We knew what we were capable of. We went out and showed them."

"The first two rounds, he was the best player on the field," McNabb said. "That's two really good defenses. He was extremely impressive, throwing and running the football, doing whatever we needed him to do."

Despite missing a Sept. 13 game at Little Rock Fair because of an ankle injury, Criswell accounted for at least 2 touchdowns in all 12 games he played in. He had a season-high 7 touchdowns (5 passing, 2 rushing) in the Devil Dogs' 56-28 victory over Farmington on Nov. 1.

McNabb coached Criswell all three years of his varsity career at Morrilton. He heaped high praise on the quarterback who is headed off to Chapel Hill after graduating from high school in December.

"He's been the highest recruited athlete and been the most talented young man that we've coached," McNabb said. "This has been a great place. There's been a lot of hard-working and talented kids. But God's blessed him. I don't think there's too many people in the world that can throw a football the way he does. And he hasn't wasted it. He's worked at it."