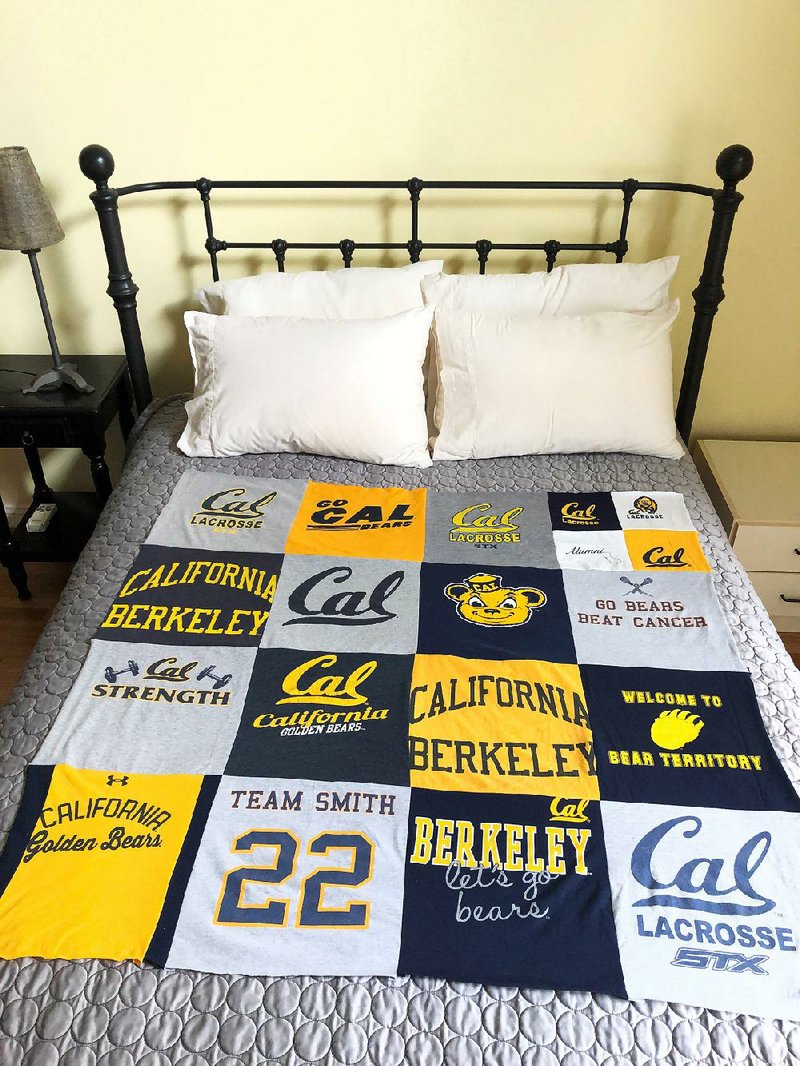 Linda Low Kalkstein, 70, of La Jolla, Calif., and her daughter are enjoying sharing memories while they repurpose her high school and college T-shirts into quilts.

These days, Americans don't agree on much, but we know this: We've got too much stuff.

Baby boomers especially are feeling as if the possessions we have bought or been given are weighing us down. For weeks, I've been talking with boomers about approaching life after 50 with curiosity and enthusiasm. Many of us are saying it's time to pare down and re-evaluate our habits.

I could watch Marie Kondo magically change lives for hours. Doing it myself, however, is not so entertaining. It's hard! How do you decide what to toss -- and how to toss it -- without burdening others?

We asked people who have been through the process to tell us their stories. Some just needed a push to get started. Others focused on a goal, such as traveling. Some were methodical, others ruthless and unsentimental. One woman said she takes items away when her husband isn't home. "And he doesn't miss most items."

For many, getting rid of the extra stuff is freeing, but not everyone shares that joy. Read on for some

real-world insight and inspiration, most of it sent in by Washington Post readers.

For some, understanding the motivation for decluttering can make the process easier.

Liese Sadler, 59, and her husband wanted to live on a sailboat, so the Charlotte, N.C., couple sold most of their belongings. "Twenty years later, we are thinking of moving to Europe, so we will sell what we can and give away the rest. Having something exciting to look forward to really helps."

Diana Carew, 73, of Whidbey Island, Wash., has no storage. "Now, if we receive a gift, it goes in the donation sack we keep in the garage. The mental lift in being clutter-free is indescribably freeing -- a happy place to be."

Michele Postal, 69, of Eugene, Ore., is motivated by the thought of passing on something meaningful. "It's easy to [pass down] the 40-year-old Christmas tree star when your granddaughter thinks it's the most beautiful star she's ever seen," she says.

For Olga Yuri, 62, of Washington, decluttering is more about responsibility. "If something happens to us, who will have to do all this? ... I must tell you that I loved it! I found my calling!"

Make a plan and stick to it

Nothing about decluttering is easy. First, you have to actually get started. Then you have to keep going. I'm really interested in the tricks people come up with. Here are some of my favorites:

"Every year, we use the period between Christmas and New Year's to attack one room, taking everything out and throwing away what we don't want or need," says Tom Fulcher, 61, of Washington. "The rule is, if you wouldn't buy it in a store today, it doesn't need to be taking up room in the house now."

Sally Spencer, 70, of San Francisco keeps boxes for donations in every room.

Shannon Wold, 56, of Scottsdale, Ariz., has two rules: Get rid of a bag of something every time a donation truck is in the area, and get rid of two pieces of clothing for every new one.

Betsy Mitchell, 64, from Parkton, Md., asks herself five questions about any possession: Is it useful? Is it beautiful? Do I have an attachment to it -- and, if so, is it easy to display or store? Can it be easily and inexpensively replaced if I decide I want it later? Can someone else make better use of the item than I can?

Look to family and friends

Several people expressed discomfort with throwing out or donating "special things" -- but said it was made easier by knowing where they were going. Robby Champion, 75, of Staunton, Va., devoted a giveaway space in his garage and invited friends and family to take whatever they could use. "So far it's working, and it's fun," he said.

Linda Low Kalkstein, 70, of La Jolla, Calif., and her daughter are enjoying sharing memories while they repurpose her high school and college T-shirts into quilts.

David Kravitz, 66, of Fairfax County, Va., said he found it impossible to throw away or donate shirts his late mother made for him during his "hippie years" or the wide-lapeled suit he wore when he married his late wife. "I realized I could donate them to a theater I regularly attend. This was especially appropriate because for many years my mother helped a hometown theater group with their props. That connection helped turn pain to pleasure."

Carol Henson, 73, and her husband housed their children's belongings through grad school, the Peace Corps and apartment living but finally reached their limit. They rented a truck, packed up the stuff and drove from their Greenville, S.C., home to their children's new homes, where they unloaded possessions on each doorstep. "Our sons and daughter knew we were driving for a visit, but their stuff was a total surprise. It was well worth it for the space we gained and the expressions on their faces."

But keep what matters

"Stuff links us to the past and the people we care about," says Mary Reed, 66, of Las Vegas. "If you have something that evokes strong, good emotions, then keep it. If you've kept a room as a shrine to a loved one, get counseling and let go of the stuff when you can. My father died when I was 16, and my mother gave me his favorite rocking chair. It was the last place I saw my dad alive, and I hung on to that chair for decades until I gave the chair to my son. My dad lives on in my heart."

Judith Dollenmayer, 77, of Washington recommends ReStore, the Habitat for Humanity store that accepts used household goods (no mattresses or sheets) and furniture and will even repair some items before sale. Other suggestions included churches that help resettle refugee families, consignment shops for crystal and silver, library sales that will take books and CDs, plus yard sales, shelters and thrift shops.

If you're looking to make a little money, others recommend turning to the newspaper's classified ads, Facebook Marketplace, and Craigslist.

Karla Forsythe, 69, of Portland, Ore., who volunteers at a nonprofit organization that provides low-income families with gently used furniture and household goods, says: "Please do not donate grungy and broken items. A cloth napkin with stains, or a measuring spoon set with spoons missing, or faded socks, or a Keurig missing some parts are going to the landfill." Instead, what is needed are working appliances, towels in good shape, clean mattresses, sofas, dressers, dish sets that can be put in a dishwasher or microwave, spatulas, and sheet sets (especially queen).

"And please stop buying so much that is just decorative or cheap," she says. "Visit an estate sale or Goodwill to buy things you need. We have a recycling crisis. Learn how to recycle correctly and put the rest in the garbage."

Forsythe is right, of course. You would be surprised how much we get wrong with recycling. But that's another story.

Print Headline: Too much stuff!