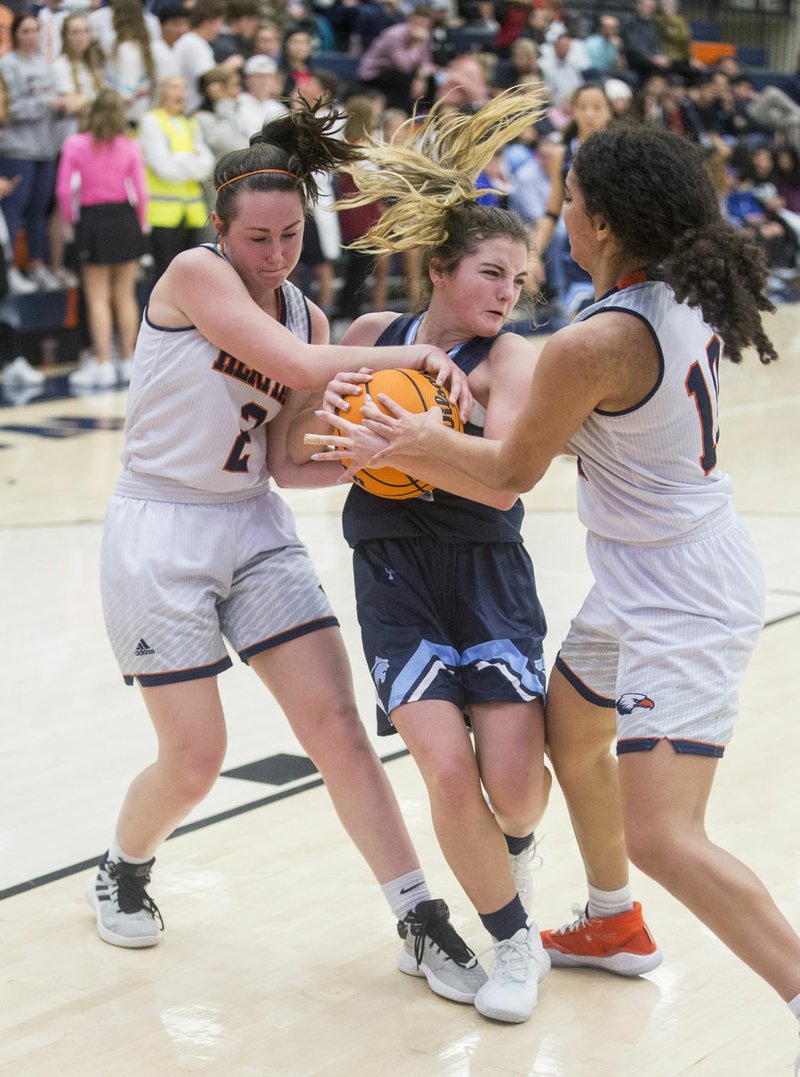 ROGERS -- Springdale Har-Ber clamped down defensively late in the third quarter and pulled away for the 69-55 6A-West Conference road win Friday on colors night in War Eagle Arena.

The Lady Wildcats forced a flurry of turnovers and used a 15-5 spurt to end the third quarter to take control.

"We haven't done that in the past: second-half defense, with our coaches on the other end," Jenkins said. "Our communication has been lacking. Tonight, I thought our communication was there. We were dialed into some details in our scouting report with our defense in the second half better than we did in the first."

Quiara Jones' inside bucket pulled Heritage within 44-36 with less than 2 minutes left in the third quarter, but that was the Lady War Eagles' lone field goal for more than 4 minutes.

Freshman Pacious McDaniel converted a three-point play in the final seconds of the quarter for a 51-38 lead. Sophie Nelson then added back-to-back baskets to start the fourth quarter as Har-Ber took a commanding 55-38 advantage.

Sophomore Caylan Koons poured in a game-high 29 points, including four 3-pointers, while Nelson added 15 and McDaniel 10 for the Lady Wildcats.

Koons played well, while Nelson excelled despite being ill all week, Jenkins said.

"I thought we did a good job tonight finding her (Koons) up the floor where she was ready to shoot," Jenkins said. "Sophie wasn't even at practice yesterday. For her to come tonight and show up and play the way she did defensively around the basket for us, I'm really proud of her."

Alex Pabon, a 6-1 senior, led Heritage with 16 points, but 10 of those came in the first half. Jones added 11 and Lynge chipped in 10 for the Lady War Eagles, who had their four-game winning streak snapped.

[Don't see the gallery above? Click here to view the photo's from the game.]

Jada Curtis hit a jumper from inside the lane as the buzzer sounded as West pulled out a victory at Springdale.

The Lady Wolverines (5-11, 1-1) had a 37-30 lead with just under 2 minutes remaining, but Springdale (3-12, 0-2) ran off eight straight points and took the lead on Thaly Sysavanh's free throw with 7 seconds remaining. Evening Guevara then raced the ball downcourt and fed it to Curtis for the game-winning shot.

Maysa Willis had 15 points to lead West, followed by Curtis with 11. Sysavanh led Springdale with 16.

Sasha Goforth scored a game-high 20 points to lead the Lady Bulldogs to their second blowout win of the week.

Print Headline: Har-Ber turns to defense to roll past Heritage