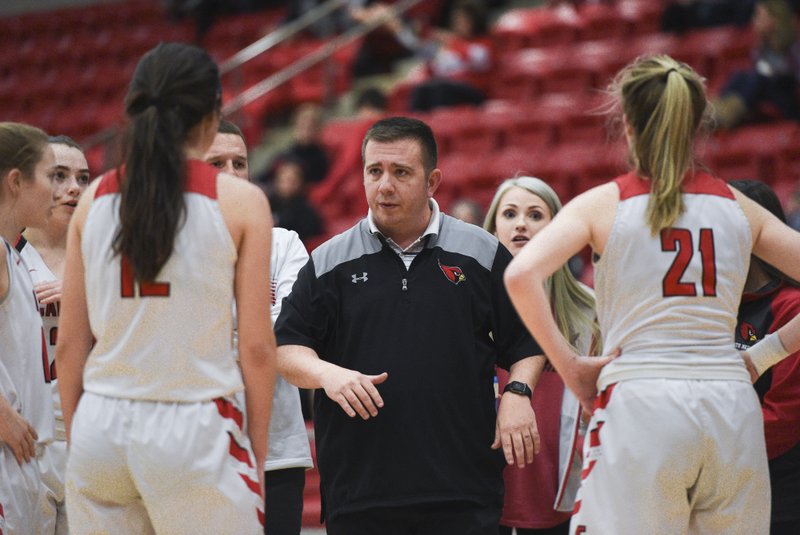 In this Jan. 3, 2020, file photo, Farmington head coach Brad Johnson talks to his players during a basketball game at Farmington High School. - Photo by Charlie Kaijo

"A game like that will take a lot of energy out of you," Farmington coach Brad Johnson said. "What you don't want to do is come back and have a letdown. That stuff starts at practice with preparation at the next practice. Our kids were very workmanlike after the Pea Ridge game."

The Lady Cardinals (16-3, 3-0) went early to Kersey, a 5-foot-11 junior forward who had 19 points in the first half to stake Farmington to a 37-25 lead. Farmington began to pull away in the second quarter with Kersey doing most of the damage against Gravette with inside moves near the basket.

Vanzant added a 3-pointer after Kersey opened the second quarter with consecutive baskets. Farmington grabbed its first double-digit lead on a rebound basket by sophomore Morgan Brye and Vazant ended the first half with a driving layup to put the Lady Cardinals ahead 37-25.

"(Kersey) played outstanding, especially in the first half," Johnson said. "She worked really hard in the post and we did a good job of finding her."

Gravette attempted to climb back into the game behind Morrison, a top scorer and playmaker who had 19 points after three quarters. But Farmington countered Morrison's surge with long-range shooting by Vanzant and Trinity Johnson, who had three 3-pointers in the third quarter.

Austin Shelley scored 12 of his 15 points in the second half to lead Farmington past Gravette.

Farmington needed Shelley's production inside to hold off Gravette, which twice closed to within one point in the fourth quarter. Shelley, a 6-foot-7 senior center, countered with consecutive baskets before Carson Simmons followed with a steal and a layup to put the Cardinals ahead 45-40 with under 50 seconds to play.