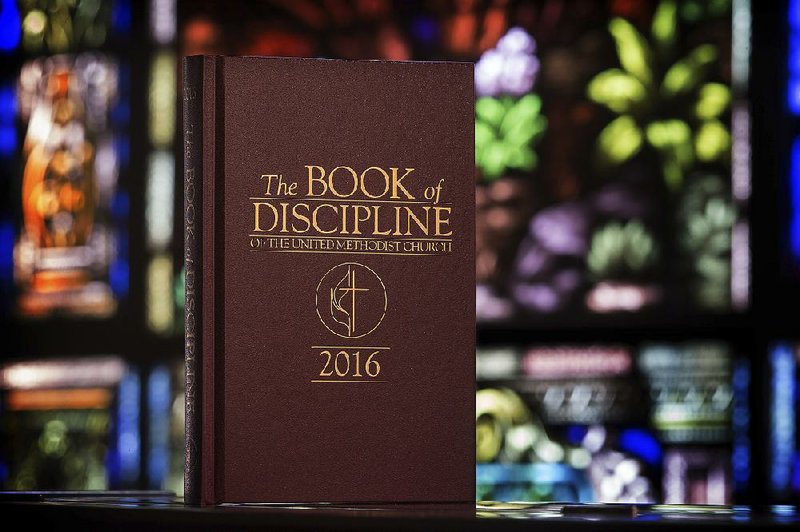 This 2017 photo shows the Book of Discipline, which contains the rules that guide The United Methodist Church.

Leaders of the United Methodist Church took notice when other Protestant denominations began allowing same-sex marriage -- and in some cases were hit with a wave of lawsuits.

Conservative Episcopalians and Presbyterians, opposed to any new stance on homosexuality, wanted to break away from their denominations. And they wanted to take their church buildings and church bank accounts with them. The denominations claimed to be the true owners of the breakaway churches' assets, and bitter legal fights sometimes ensued.

The United Methodist Church leaders who announced a historic agreement last week -- splitting the nation's largest mainline Protestant denomination along the fault line of beliefs on sexuality -- hope to avoid that fate.

"In any mediation, you always ask the mediation participants: 'What is the alternative? Do you want scores of lawsuits?'" said Kenneth Feinberg, the prominent negotiator who brokered the separation agreement. "Hiring and retaining and paying lawyers and becoming involved in years of litigation? That alternative was so uninviting that it provided leverage for successful mediation."

The plan formulated by 16 United Methodist leaders -- progressive and conservative, American, African and Asian -- must be voted on at the church's general conference in May, and it needs worldwide approval to pass. Its drafters and many others in the denomination expect that it will garner enough votes.

The agreement offers concessions to many groups. A new "traditionalist" denomination would spin off from the United Methodist Church and get $25 million of the denomination's funds -- in exchange for dropping all claims to other church assets, such as church-run charitable organizations. The United Methodist Church would remove rules that ban same-sex marriage and LGBT clergy, while the new denomination would continue adhering to its biblical interpretation that homosexual conduct is a sin.

The United Methodist Church has been one of the last nonevangelical Protestant churches to forbid same-sex marriages.

Under the agreement, individual congregations could vote to leave the United Methodist Church, taking their buildings with them. Or an entire "annual conference" -- the church's term for a regional body, such as the Baltimore-Washington Conference that includes the District of Columbia area -- could vote to join the traditionalist denomination.

Feinberg volunteered to broker the Methodist agreement pro bono, drawing on his experience negotiating agreements and apportioning out funds to survivors of tragedies including the Sept. 11 attacks, the Boston Marathon bombing and mass shootings. He said United Methodist leaders discussed options for keeping the church together, and decided at their first meeting that the task was unworkable and that they would instead focus on a fair separation. They spent the next six months working out the terms.

"Once that decision was reached, the mediation became effectively a secular mediation," Feinberg said. The conflict wasn't theological anymore. It was about who got how much of what.

While Feinberg conducted closed-door meetings in Washington, much larger groups of Methodist pastors were gathering across the country to debate other plans that could be brought forward at the May general conference.

The Rev. Adam Hamilton, the senior pastor at the nation's largest United Methodist church (Church of the Resurrection in Leawood, Kan.), led a series of those meetings. This week, he praised the separation plan as a work of good bargaining: "In any kind of negotiation like this, nobody thinks it's a perfect plan. Nobody is 100% excited."

An important goal that he heard from many pastors, which he believes this plan would achieve, was to avoid a huge wave of individual churches voting on whether to remain United Methodist or not. "Nobody likes the idea of local churches having to vote because it potentially divides the church. If you have a vote, and it's 45% to 55% either way, you have a deeply divided church," he said.

Even if most local churches never vote on the concern, and even though the agreement is designed to let those that leave take their property with them, lawyer Daniel Dalton says those churches ought to be consulting attorneys anyway.

"You're not going to see what happened in the Episcopal Church or the Presbyterian Church (USA), where you had decades of litigation going on," said Dalton, who has represented churches in the disputes in both of those denominations and said he has been hired by at least a dozen United Methodist churches.

Churches might find that their title documents suggest property is owned by the denomination, or that they haven't updated their legal documents in decades, since before the United Methodist denomination came together in 1968. They'll need to have a clear title if they ever want to sell their property, Dalton cautioned.

He said churches should also check their governing documents, to see how they define who is a member and who can vote in a congregational election, before a potential separation vote.

And churches get a lot through their denomination -- including health insurance coverage for their employees, tax-exempt status with the Internal Revenue Service and more -- which they will need legal help replicating if they leave the United Methodist Church.

The separation plan now rests in the hands of delegates to the May meeting. Feinberg said he hopes they will adopt what he helped hammer out in backroom meetings in Washington.

"This is a huge church, and the United Methodist Church plays a very important role in our country's heritage and in our country's sense of self and what the country stands for," he said. "I think resolving a church conflict without litigation, satisfactory to all church followers, is in the public interest."