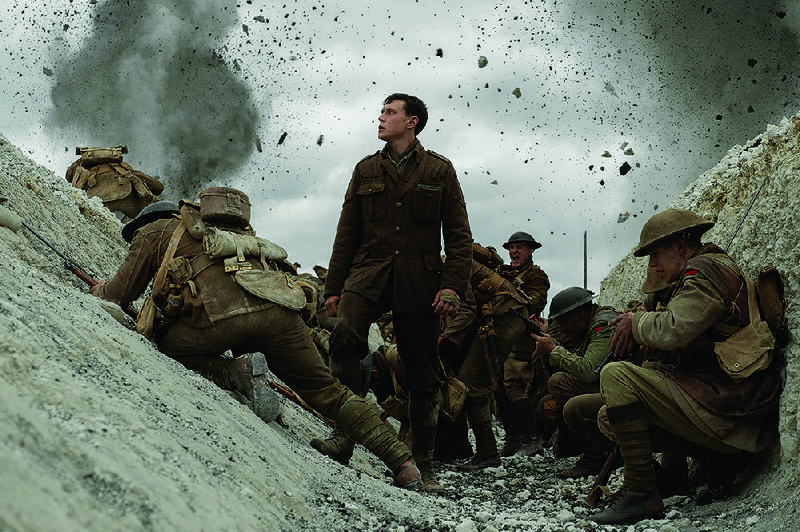 When we first meet Lance Corporals Blake (Dean Charles-Chapman), and Schofield (George McKay), they are lying down near a pretty field of French wildflowers, catching a quick nap in between bouts of duty in the WWI trenches. Take note of the moment, for as Blake is rousted from sleep by a sergeant telling him to choose another man and meet for a mission because it is literally the last time the pair are afforded such simple tranquility until the final minute.

It's also the opening of a tracking shot that seemingly never ends. Director Sam Mendes, working from a script he co-wrote with Krysty Wilson-Cairns, has gone full Birdman, shooting the entire film as if it were one connected shot (albeit with various cheat points that allowed them to shoot it in much smaller pieces). Very often this sort of conceit plays more like a flashy showcase of technical wizardry than anything rooted in genuine artistic ambition. But here, as Blake and Schofield are handed their orders -- to hand-deliver a supremely important letter from the general to the commander at the relatively nearby front where Blake's brother is stationed, in order to prevent the entire regiment from falling into a deadly German trap -- the accumulation of horror and degradation they have to endure takes on an immersive edge, as the unrelenting aspect of the film's structure echoes their harrowing journey.

Rating: R, for violence, some disturbing images and language

The plot, such as it is, plays out in small, tight sections -- the boys make their way through the now-deserted German bunkers, head through the wastes of no man's land, then through a bombed-out French town, en route to their eventual destination, all the while meeting up in brief snippets with other soldiers, officers, civilians, cows, and the remaining straggling Germans, still determined to cut them down -- a bit like a road movie, only through piles of dead bodies, bombed-out farmhouses and mud.

Appropriately enough, the two leads seem unlikely as would-be heroes, with young, chap-faced cheeks that betray not a whisker. Blake, slightly pudgy with wide-set eyes, and his anxious friend, the more experienced Schofield, thin and pinched and far less optimistic about the sanctity and efficacy of the mission, become more believable for their lack of skill, and more sympathetic as a result. They aren't cagey veterans, à la Saving Private Ryan, and they aren't trained killing machines, à la Inglourious Basterds. They're young, vulnerable, and have virtually no idea what's in store for them.

As is the way with many a war movie, the film is peppered with high-powered guest stars the boys meet en route, everyone from Mark Strong and Colin Firth to Benedict Cumberbatch. Problematically, the trouble with these kinds of cameos, like the structure of the film itself, is the way it calls attention to the filmmaker's decisions. For a film whose primary purpose is to suggest the manner in which unremarkable soldiers can have an enormous impact on the greater conflict around them, populating the screen with a series of Oscar winners and notable faces suggests quite the opposite as if Mendes is hedging his bets from having a pair of relative unknowns in the lead roles.

At the same time, when the action involves Blake and Schofield alone, the immersive element makes the film that much more harrowing, allowing you to forget some of the director's more intrusive choices. In a particularly unnerving scene near the beginning, the boys are making their way through a deserted German underground barracks when the walls start collapsing in on them, filling the frame with dust and debris as the pair frantically try to escape down the narrow, winding passageways before being engulfed.

In another such moment, some time later, as Schofield is floating down a river, having barely escaped a pair of German soldiers and survived a harrowing rapids, he finally arrives to calmer waters, where he wraps his arm around a floating tree branch and almost passes out underwater before rousing himself amidst a small flurry of floating cherry blossoms, gently landing all around him. The moment of brief respite is halted, however, by the current driving him toward a massive fallen tree whose sunken branches have collected a pile of grisly, floating corpses, forcing the terrified Schofield to have to climb over their horribly bloated bodies to get to the safety of shore.

It's not subtle, but it is intensely visceral, something along the lines of what Iñárritu achieved with the even more technically ambitious The Revenant. But for all its skill and filmmaking achievement, it boils down to a very simple concept, one that actually better justifies the single-take conceit.

Just before the closing credits, we learn the film is dedicated to his grandfather, who "told the stories." And that's the pitch: With its continual camera swoop, Mendes is making visual the verbal style of the spoken war story. As the tale is spun from the speaker's lips, there aren't jump cuts, parallel plot tendrils, or a sense of what the other characters might doing: It's one long, continuous first-person narrative, in tight chronological order, moving seamlessly from event to event until its conclusion. What could be seen as unnecessary flash becomes something richer, a vivid invocation of his grandfather's storytelling process. In this way, despite its high-tech credentials and world-beating male cast, Mendes has managed to make a high-gloss war film feel surprisingly personal. 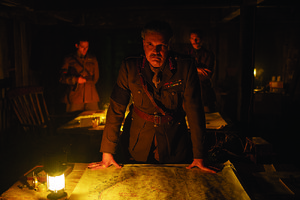 British General Erinmore (Colin Firth) dispatches two young soldiers on a dangerous mission in an effort to avoid a battlefield massacre in 1917. 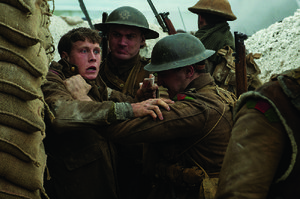 Schofield (George MacKay, left) is given a dangerous mission to prevent 1,600 British soldiers — and his brother — from walking into a German trap in 1917.

Print Headline: FILM REVIEW: '1917' is the harrowing tale of two young men on a mission