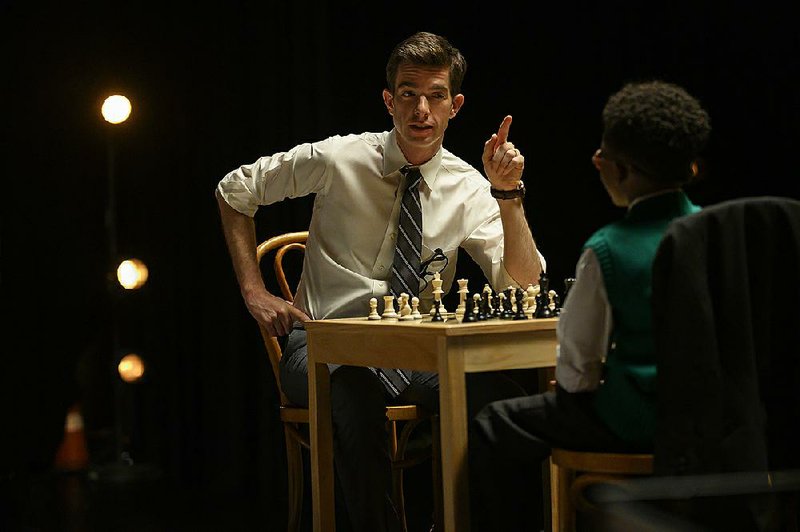 Wait! Wait! Whoa! Have either you or a loved one assembled a list of the best TV of 2019 yet? To judge by the sheer number of these things, surely someone in your household must have written a Top 10 TV list in the past six weeks. OK, so you have? Well, then I am sorry to inform you, but you're going to have to do it again: Arriving too late for November deadlines of many journalists, but right on time emotionally, Netflix has dropped John Mulaney & the Sack Lunch Bunch, a children's variety show, and it's almost unsurprising the comedian's special arrived on Christmas Eve.

This year, he's been the gift that keeps giving.

His "Bodega Bathroom" musical on Saturday Night Live was a spring highlight (and a kind of sequel to his great Les Miserables sendup "Diner Lobster" from the previous fall); September brought a third season of Big Mouth, a very funny animated show he makes with Nick Kroll; last winter had Original Cast Album: Co-Op, Mulaney and Seth Meyers' sendup of Stephen Sondheim for IFC's Documentary Now! series; then there was his voice acting as radioactive swine Peter Porker in the Oscar-winning Spider-Man: Into the Spider-Verse, his left-field Henry David Thoreau for the Apple TV+ series Dickinson and his recurring role on HBO's Crashing as a cruel, vindictive John Mulaney.

And still, John Mulaney & the Sack Lunch Bunch is his best present of the year.

And his warmest. Presented as a show created by adults for adults but starring children, it does what Mulaney does best: Affectionate, quizzical parody, delivered blunt and sweet. He doesn't acquire targets but memories. Here the inspiration is low-budget, high-energy children's public TV of the '70s and '80s -- Electric Company, Zoom, 3-2-1 Contact. On a soundstage filled with kids, wearing a white V-neck sweater, he says he recently watched kids' TV and was not impressed. Also, he says he has no children or plans to have children.

What follows is lovingly, decidedly uneven, though like the best of Mulaney's writing, aware of the limitations and uncertainties. A child asks him to explain the show's tone.

Well, he says, he made it "on purpose," and if it's bad they can say "it's ironic, and if it's good, you know, thanks, we worked hard on this." Which brings him to his first lesson: if you pretend you know what you're doing then a lot of people will believe you do. He says he knows many successful people who do the same. "Name names," a child asks.

"Sister, I could for hours," he says.

From there it's musical numbers and sketches and animation and even a little shadow puppetry. Yet the genius here is not in layering an adult sensibility over kid's material; it's not in recycling that low-rent TV condescension of where kids say the darnedest things.

Rather, it's in recognizing the fresh eyes and unique voice in the looseness of a young perspective, in the unwillingness to play by rules but instead invent new ones on the fly. One girl asks Mulaney to play restaurant and takes the role of hostess, then she informs him that they are closed for a private party and 'SIR! SIR! You'll have to return another night!' Corny as this sounds, it's a salute to the freedom of those distinctive sensibilities.

Which, the older you get, the more you tend to tramp down and conform until one day you wonder -- if you're lucky and self-aware enough -- what did you sound like again? Which, I guess, makes this seem somewhat like an empowerment seminar for adults. Except Mulaney is too fond and respectful of these kids and who they are to steer their messages. He opens the show with a boy who speaks in a heavy lisp and torrent of sentences, saying he is scared of asteroids but mostly, he's mostly afraid of drowning. Other kids tell Mulaney they're afraid of clowns and dying in their sleep and The Purge.

The Sack Lunch Bunch are smart and like a lot of kids, they're weirdos -- and thank God for the weirdos, Mulaney seems to say. Children, in general, are wonderful weirdos. One of the show's many (and memorable) musical numbers is about a boy who has "tried all the food" but only eats one thing: a plate of noodles (the tube kind, with a little bit of butter). Another number finds a girl struggling to put on a show in a living room full of indifferent adults -- until David Byrne, every weirdo's best friend, arrives. (Incidentally, if you've wondered what David Byrne would look like dressed as Elsa, look no further.)

There are so many surprises I hate to give more away. Mulaney's songs are so memorable that, after the Sondheim parody and SNL's Willy Wonka bodega-bathroom sketch ("Come with me and you'll be/In a world of zero sanitation") -- all of which featured Mulaney's songs -- you wonder if he's either a nascent Sondheim himself or just an astute satirist. He's polite and cutting, tearing into Broadway conventions, but as a way of celebrating whatever unique qualities makes the creakiest cliches sing.

Mulaney, a bad actor and a perfect comedian, is unable here to hide delight on his face; despite what I've written, he's not looking to make a unified theory of how his sensibility works. He's looking for laughs. That said, John Mulaney & the Sack Lunch Bunch comes as close as anything Mulaney's done to explaining his appeal and outlook. It ends with the Sack Lunch Bunch saying that they fear the loss of their parents' love and the loss of their parents and the loss of goodness in the world, and as each says this in his or her own way, the effect is touching. You are the gift you give others, Mulaney is saying, so remember that: Be confident, use your voice and own it.