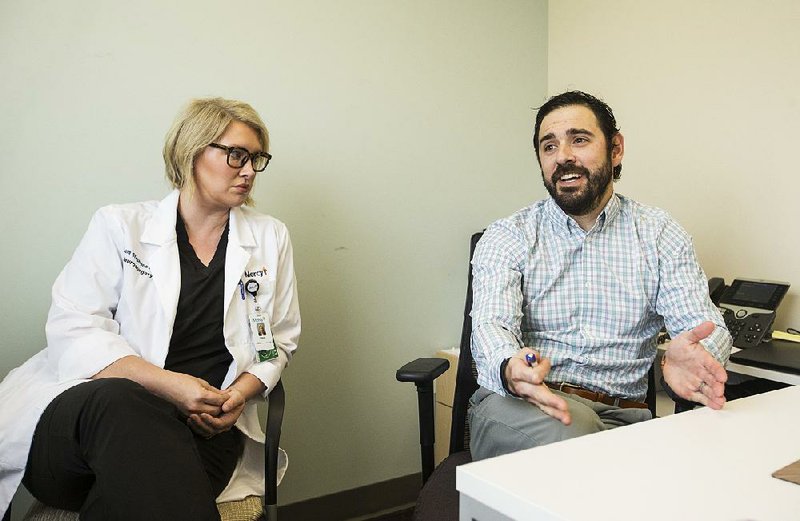 Paula Stephens, a nurse practitioner specializing in neurosurgery, and Alex Castellvi, a neurosurgeon, were hired by Mercy Hospital Northwest Arkansas in Rogers. Before the additions, Mercy transferred many of its neurology cases to other hospitals, Castellvi said. - Photo by Ben Goff

Northwest Arkansas is slowly adding neurosurgeons, allowing more patients to stay in the region to receive care instead of having to go elsewhere, officials say.

It’s a matter that not only affects patient care, it has an economic component for the region.

One of the major findings in the report was that the number of specialty health care providers is not keeping up with the region’s growing population and is not enough for the region to be a “health care destination,” a place where patients are likely to travel to receive health care.

One neurosurgeon isn’t enough to provide that level of care, but Mercy has that goal in mind as it adds more doctors and nurses, he said. The hospital also added an advanced practice nurse practitioner, Paula Stephens, who specializes in neurosurgery.

Washington Regional Medical Center in Fayetteville has a 20-bed neurosurgical intensive care unit and is home to the Northwest Arkansas Neuroscience Institute, which provides services such as neurosurgery and minimally invasive surgeries for treatment of strokes and aneurysms.

Washington Regional has four neurosurgeons who regularly see patients from as far away as Russellville and Mountain Home, said Dr. Larry Armstrong, who is a neurosurgeon. The hospital treats patients transferred in, often by helicopter, who have suffered hemorrhages or who need brain or spinal surgery, he said. The surgeons also see patients with brain tumors.

Before hiring Castellvi and Stephens, Mercy hospital transferred many of its neurology cases to other hospitals, including Mercy Hospital in Springfield, Mo., Castellvi said.

Mercy hospital in Rogers still has to transfer some patients, but not as many, and should have to transfer even fewer when it adds another neurosurgeon, Castellvi said.

“Not having a neurosurgeon when you’re taking care of trauma X’s out a whole lot,” Stephens said.

She explained that some patients need to see a neurosurgeon even if they don’t need surgery. Patients who go to the emergency room and have a small brain bleed, for example, sometimes need to be seen by a neurosurgeon to evaluate if they need surgery, she said.

Northwest Health is actively searching for another neurosurgeon, Driessnack said.

Thai is on-call most of the time, and the system’s hospitals need another neurosurgeon so someone can be available at all times to take patients, he said.

“There’s not that many of them,” Driessnack said.

Neurosurgery is a highly specialized field that relatively few people pursue, he said. Neurosurgeons often prefer to live in larger cities where they’re less likely to be the only one or one of only a few neurosurgeons taking all of the patients in their area.

“I think it’s still an academic field, so the graduating neurologists — they go on to fellowships or they want to stick with a university setting,” said Dr. Mark Moss, an interventional neuroradiologist at Washington Regional Medical Center.

Moss said many doctors would rather have the lifestyle of a neurologist who works in an outpatient clinic than that of a neurosurgeon who is on-call and works such cases as brain injuries from vehicle accidents, for example.

Also, doctors are likely to practice near where they complete their residencies, according to the American Association of Medical Colleges. None of the Northwest Arkansas hospitals nor the region’s only medical school, the University of Arkansas for Medical Sciences Northwest, offer residencies in neurosurgery or neurology. That means hospitals must recruit neurosurgeons and neurologists from outside the area.

Residencies in highly specialized fields, such as neurosurgery, tend to be in larger cities partly because the larger populations mean the doctors-in-training are more likely to see a variety of cases and get more comprehensive experience, Driessnack said.

He said he isn’t sure that the Northwest Arkansas population can support residencies in neurosurgery just yet, but “I think we’ll get there.”

One of the major findings in the report was that the number of specialty health care providers is not keeping up with the region’s growing population and is not enough for the region to be a “health care destination,” a place where patients are likely to travel to receive health care.