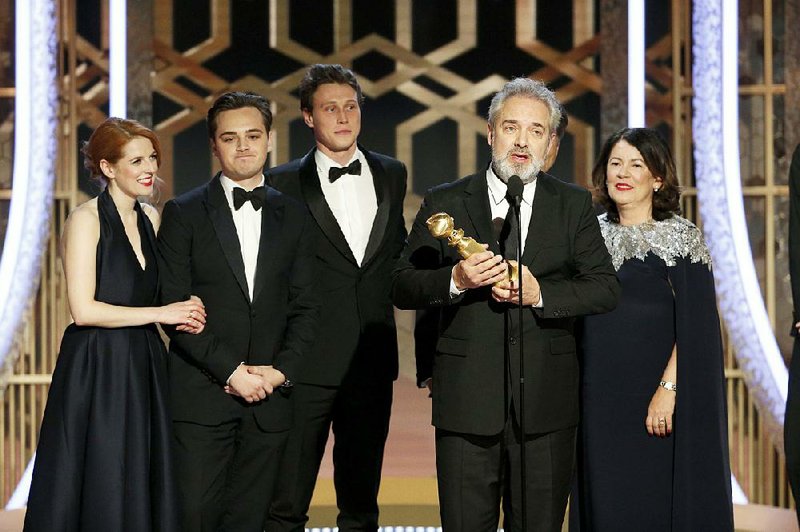 The 77th Golden Globes were meant to be a coronation for Netflix. Instead, a pair of big-screen epics took top honors Sunday, as Sam Mendes' technically dazzling World War I tale 1917 won best picture, drama, and Quentin Tarantino's radiant Los Angeles fable Once Upon a Time ... in Hollywood won best film, comedy or musical.

The wins for 1917 were a surprise, besting such favorites as Noah Baumbach's Marriage Story -- the leading nominee with six nods -- and Martin Scorsese's The Irishman. Both are acclaimed Netflix releases but they collectively took home just one award, for Laura Dern's supporting performance as a divorce attorney in Marriage Story. The Irishman was entirely shut out.

1917 also won best director for Mendes. The film was made in long takes, giving the impression of it unfolding in one lengthy shot.

Once Upon a Time ... in Hollywood had an easier path than the more competitive drama category. Brad Pitt won for best supporting actor, his first acting Globe since winning in 1996 for 12 Monkeys, padding his front-runner status for the Oscars.

"I wanted to bring my mom, but I couldn't because any woman I stand next to they say I am dating, so it'd just be awkward," said Pitt.

Ricky Gervais, hosting the NBC-telecast ceremony for the fifth time, began the evening with an expletive-laden plea against hypocrisy, telling winners to stick to thanking their agent and their god. But throughout the night, those who took the stage used the moment to speak on matters including the currently raging Australian wildfires, destabilization in Iran, women's rights, the importance of LGBT trailblazers, and even the importance of being on time.

Gervais also argued that Netflix had taken over Hollywood, given the streaming service's commanding 34 nominations in film and TV coming into the Globes. But the awards were widely spread around among traditional Hollywood studios, indie labels like A24, cable heavyweights like HBO and relative newcomers like Hulu.

As always at the Globes, there were surprises. Mendes' best director prize bested the likes of Scorsese, Tarantino and Bong Joon Ho (Parasite). The award was well-timed for 1917, which expands nationwide Friday.

"There is not one director in the world that is not in the shadow of Martin Scorsese," a plainly surprised Mendes said.

Awkwafina, the star of the hit indie family drama The Farewell, became the first woman of Asian descent to win best actress in a comedy or musical. "If anything, if I fall upon hard times, I can sell this," said Awkwafina, holding the award.

No other category has been more competitive this year than best actor. On Sunday, Joaquin Phoenix won for his loose-limbed performance in the divisive but hugely popular Joker in a category that included Adam Driver (Marriage Story).

Gervais, who has a series on Netflix, said he could summarize the three-hour award show with a simple phrase: "Well done, Netflix. You win."

Hosting the Globes for, according to him, the last time, Gervais was perhaps even more cutting than before. He told executives in the room that journalist Ronan Farrow, who has exposed cases of sexual misconduct, was coming for them. He said something vulgar that got bleeped about Judi Dench's part in Cats. And most of all, he mocked Hollywood hypocrisy, skewering stars for working for companies like Apple, Amazon and Walt Disney Co. while giving speeches urging social change.