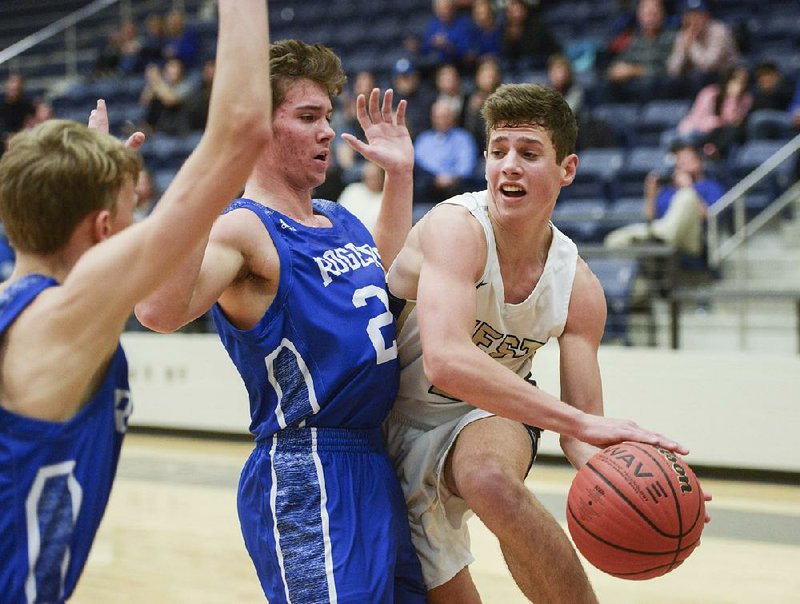 It's rare that a victory during the high school nonconference basketball schedule serves as a turning point for a team, but for Bentonville West the Wolverines may very well look back at a mid-December game against Watson Chapel as the landmark outing they needed to resurrect their season.

"We just need a victory," Bentonville West Coach Greg White said prior to his team's clash with the Wildcats on Dec. 21 during the John Stanton Classic in Conway. "We've been right there against some really good teams. We're tired of losing. ... we need a victory."

Bailey at a glance

NOTEWORTHY Broke his own school-record for points in a game with 40 against Villa Angela-St. Joseph, Ohio, during the Neosho, Mo., Classic on Dec. 26. He originally set the record with 38 points against Little Rock Parkview on Nov. 26. … Averages 23 points per game. … Played AAU basketball over the summer for MOKAN Elite.

A day earlier, the Wolverines let a double-digit, second-half lead slip away in a loss to Little Rock Central that dropped them to 2-4. But White's group delivered perhaps their most complete outing to date by following the lead of standout guard Dillon Bailey.

"When you've got a guy that knows when to turn it on and can impact the game in as many ways as he can, you can't help but marvel at him," White said. "The thing is that the players on the team want him to be our guy. He trusts them, and they trust him.

"He has that uncanny ability to make everyone on the team better. Sure he can go out and score a lot of points, but he's going to fill up other categories on the stat sheet. Dillon plays with a whatever-it-takes mentality."

Bailey's mindset has seemingly rubbed off on his teammates, and it's made Bentonville West one of the more dangerous teams in Class 6A. The Wolverines have won three of their past four games, starting with their 31-point beat down of Watson Chapel in which Bailey finished with 24 points, 7 rebounds, 6 assists and 4 steals. But performances like that have been a normal occurrence this year for the senior.

Bailey, 6-2, 175 pounds, turned in a 38-point, 15-rebound outing in a 70-67 loss to Little Rock Parkview in the opener and followed that up in the team's next game a week later with a 25-point night against Conway. For the season, Bailey's averaging 23 points, 5 rebounds and 3 assists per game while shooting just over 44% from beyond the three-point line and 87% at the foul line.

"I put in a lot of work during the offseason just to get ready for this season," he said. "Being able to extend my range a little bit and shoot a couple of feet further behind the line, working extra hours to be able to do things like that. That helps us to be able to spread the floor a little more. And then, I grinded a lot in the weight room.

That dedication was apparent this past summer when Bailey played on the AAU circuit with MOKAN Elite, a Kansas-City based program that's churned out more than 70 Division I college basketball players, six of which are currently in the NBA. Bailey said he would make the three-hour drive from Bentonville to Kansas City on Fridays.

"Then we'd have a tournament somewhere like Kentucky, Illinois, Texas, places like that. But it's insane how much that impacted me. Just practicing with those guys and being able to go up against that type of talent got me so much better. It's truly helped these games that we've played in because it's slowed down for me."

Games may seem slower to Bailey, yet his level of play hasn't decelerated. His three-day run at the Neosho, Mo., Classic after Christmas backed that assertion.

He averaged 25 points per game, and the attention he started to garner enabled a pair of his allies to flourish. Sophomore forward Riley Buccino averaged 15 points, while junior guard Evan White registered 8 points, 7 rebounds and 5 assists. Both shot well over 40% from behind the arc, which made it tougher for teams to double Bailey.

"Dillon played some amazing basketball, and that's really the best way to describe it," White explained. "I talked to him about the fact that teams were going to try to face-guard him. I said 'trust me, I'm going to get you the ball, trust your teammates and just let the game come to you.

"He took one bad shot in three games. West Memphis was there, of course, and Chris Moore is a great, but Dillon was the most exciting player up there."

Bailey scored a school-record 40 points in the Wolverines 85-82, double-overtime victory over Villa Angela-St. Joseph, Ohio where he delivered the go-ahead basket with 46 seconds remaining. He had 18 points the next day, with 13 coming after halftime, to help the Wolverines beat the host team in the semifinals before ending with 19 points in a 58-49 loss to West Memphis. Less than 24 hours later, Bailey was back in the weight room.

"He's been so overlooked that he goes into every game with a chip on his shoulder," White said. "I think his overall size and our location is one of the reasons why colleges haven't been on him as much. Dillon plays to prove that he's the guy that everyone has been skipping over.