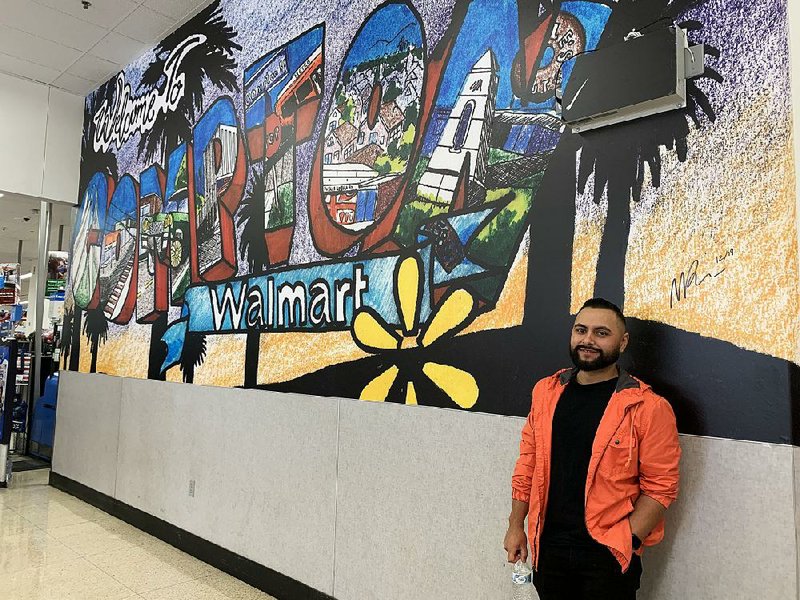 Michael Rangel stands in a Compton, Calif., Walmart Supercenter next to a mural he designed. (Courtesy of Walmart)

Walmart Inc. is looking for artists in about 1,000 U.S. communities to create murals to be displayed in their local stores.

The mural project is part of a community engagement initiative called Walmart Rise that Greg Foran, former president and chief executive of Walmart U.S., announced at last year’s celebration for shareholders and employees.

Walmart Rise aims to strengthen Walmart’s role in the communities it serves and deepen relationships with local residents, Foran said.

“Murals give communities a unique sense of place,” said Maggie Sans, Walmart vice president of community relations. “In much the same way, our stores are a reflection of the uniqueness of the communities they serve. Through the Walmart Community Mural Project, stores have an opportunity to visually express their pride and engage their associates and customers in highlighting those attributes that make their community special.”

Michael Rangel of Los Angeles-area city of Compton, Calif., created the first mural chosen for installation inside a Walmart store. Unveiled Dec. 10 in the Compton Walmart Supercenter, Rangel’s work titled “Compton Welcomes You” was selected by the store’s employees.

The colorful mural depicts scenes from around the city amid a backdrop of Southern California palm trees. Rangel said his art is inspired by his surroundings, “and there’s so much history and vibrance in Compton. From the food, to the people and the cars, there’s a rich culture and a deep sense of community here that makes the city so unique, while constantly changing.”

“I’m honored to be a part of this project and create a piece that symbolizes a city I know and love,” Rangel said.

Emma Sharif, a Compton city council member and mayor pro tem, said in a news release that the mural is “a celebration of who we are as a city. It’s a warm welcome to everyone who walks through the doors of a store that takes pride in being a part of this city we call home.”

“This piece is meant to represent the connection between the store and the community it serves,” Louis said. “Its associates and customers are as diverse as Utah’s terrain. I hope this mural is viewed as a gift to the neighborhood and all who walk through these doors.”

The store’s manager, Terry Lantz, called Louis’ mural “a love letter from our store to our associates, customers and the state of Utah.”

Like all the artists whose designs are selected for the project, Rangel and Louis each received a $300 stipend from the Bentonville retailer. In addition, most Walmart Supercenters typically see thousands of customers enter daily, which means broad exposure for the artists’ work.

Artists of all ages and levels of skill and experience may submit their designs to walmartmurals.com for consideration. Information about participating stores, deadlines, formats and other submission requirements is also available through the website.

Once a design is chosen to be an in-store mural, it will be digitally transferred onto a large vinyl cling and displayed in a prominent location within the store. The displays will be temporary, but a Walmart spokeswoman said they could be up for as long as 18 months.

Delia Garcia, senior director of communications at Walmart, said the idea for the project was presented to store managers last year at one of their large annual meetings. They were given a chance to sign up to receive a mural on a first-come, first-served basis.

The response has been good, Garcia said, with the retailer receiving several hundred submissions so far. Some of those are for stores in Arkansas, she said.

Because the program’s intention “is to connect our stores to their communities in an authentic way,” Garcia said, “we are now working to make sure the artwork submitted is matched to the right stores.”