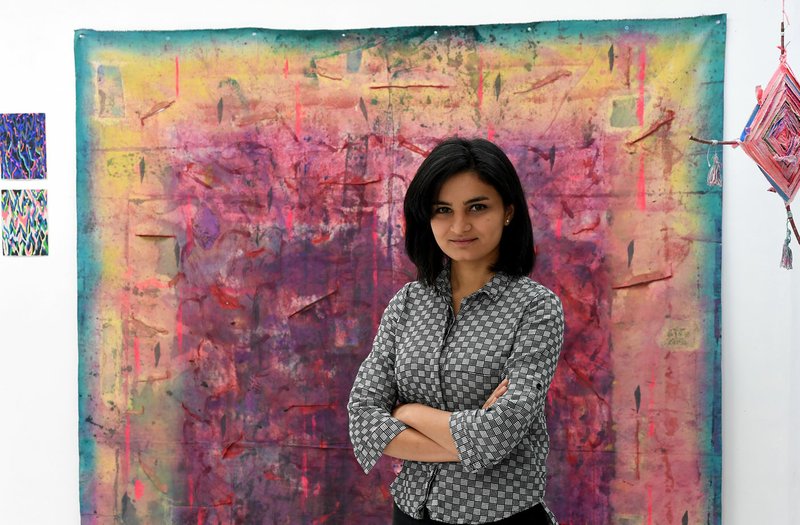 NWA Democrat-Gazette/J.T. WAMPLER Iranian artist Ziba Rajabi in her Fayetteville studio. Rajabi uses art to reconcile her relationship with Northwest Arkansas and her hometown of Tehran, Iran. "After two years, I started going deeper to the difference and similarities, like culture and history," she said of comparing Northwest Arkansas to Tehran.

Ziba Rajabi uses art to reconcile her relationship with Northwest Arkansas and her hometown of Tehran, Iran.

"All my works are about my living experiences," Rajabi said. "It's something that I cannot ignore."

Rajabi's work involves layers of acrylic and watercolor on fabric and canvas, she said. Her pieces often flow down walls and onto the floor of the installation space.

"I wanted to have a shallow physical space between my work and the space," she said of a piece she was working on in her Fayetteville studio. "I wanted to interact with the space. Not only on the wall, but also touching the floor."

Rajabi, 31, said she tries to create a tiny history in her work by making layers of watery and washed paint. She at times integrates material such as wire and yarn.

"They are not just a 2D flat surface, but they are still based on the principles of paintings," Rajabi said. "I still call them paintings, but in the way that they interact with space make them more sculpture-like."

The artist said she's inspired by the variety in America's land features, particularly those in Arkansas.

"After two years, I started going deeper to the difference and similarities, like culture and history," she said of comparing Northwest Arkansas to Tehran.

Having people interact with her work as a means of expressing the value of diversity is important, Rajabi said.

The artist used a piece called Casement after Caspar David Friedrich as an example. She created it with grommets viewers could look through to see a second layer of the work hung behind it. Patches of reflective material beneath the grommets change the way the piece appears as viewers explore the work and see themselves and others reflected back at them.

"I wanted the participation of the Arkansas people with my work as a non-Arkansan," Rajabi said. "I wanted to have a bridge between different cultures and different parts of art history."

Diversity is a significant reason why Rajabi decided to study art in America, she said.

"I wanted to know more people that are not just Iranian like me," Rajabi said. "When I came here, I saw that people also wanted to learn more about me and where I come from."

Rajabi said her medium is somewhat unique compared to many artists.

"It's portable," she said. "I can fold them anytime and put them in my suitcase and just travel."

Creating portable art is significant for Rajabi, who came to the United States in January 2017 on a student visa to study at the University of Arkansas.

"I think it's one of the qualities that happened in my work only because I moved from another continent to the United States," she said.

Rajabi graduated in December with a master's of fine arts, but her family was unable to attend her graduation because of the travel ban in America for Iranians. Iran leads the banned countries in the number of people impacted with a population of more than 80 million people, according to the Public Affairs Alliance of Iranian Americans' 2018 annual report.

The travel ban indefinitely suspends the issuance of immigrant and nonimmigrant visas for people from Iran, Libya, Somalia, Syria, Yemen, North Korea and Venezuela, according to the alliance website.

President Donald Trump signed the order to institute the ban Sept. 24, 2017, as a means of preventing the entry of terrorists and others who may pose a public safety threat into the United States, according to the U.S. Department of State website.

Iran had the largest number of legal entrants into the U.S. between 2006 and 2015 among the nations included in the ban, according to the Alliance of Iranian Americans report. Iranians accounted for 12,000 of the 17,000 students from the banned countries studying in the U.S. in 2017.

Studying art in America allows Rajabi to create in a manner that wouldn't be feasible in Tehran's art scene, she said.

"Part of it actually comes back to diversity," she said. "Not just diversity in people's nationality, but diversity in the media, in the facilities, in the university that let me make more art."

Business and commercial galleries dominate Tehran's art scene, she said. Artists are often limited to creating fine art items that can be sold in Iran or in the Middle East market in Dubai in the United Arab Emirates.

"It's a little bit annoying, because if you cannot do what they want you to do, you cannot survive," Rajabi said.

Artists who can't find a commercial gallery in the United States have options that don't exist in Tehran, such as nonprofit organizations funding the arts to help artists make a living, she said.

"There is a lot of misunderstandings," she said, noting confusion can at times be mutual. "Sometimes it makes it hard to convey what you want to say, to convey your ideas or your story, which needs time to be solved."

Self-identifying as an Iranian has sometimes caused people to associate her with negative stereotypes of her people and homeland, Rajabi said.

"They want to kind of expand it to everything that they see," she said.

The relationship between the United States and Iran and the effects of this relationship on how Iranian Americans are perceived has been a challenge, according to the alliance report. 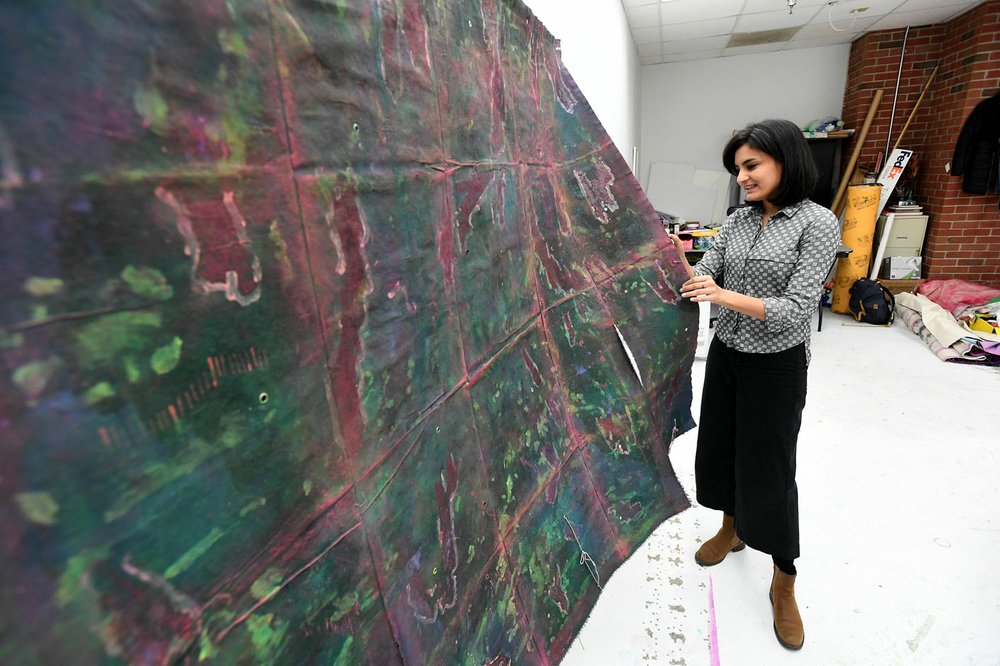 NWA Democrat-Gazette/J.T. WAMPLER Iranian artist Ziba Rajabi in her Fayetteville studio Dec. 5. "All my works are about my living experiences," Rajabi said. "It's something that I cannot ignore." Rajabi's work involves layers of acrylic and watercolor on fabric and canvas, she said. Her pieces often flow down walls and onto the floor of the installation space.

Rajabi took steps to expand her understanding of the U.S. and to help Northwest Arkansans better understand Iran by joining the university's International Culture Team.

The team is part of the Office of International Students and Scholars and has about 300 graduate and undergraduate international students, scholars, study abroad returnees, spouses and community members representing over 50 countries, according to the university's website. The team offers global education to the campus, schools at all grade levels and business and community organizations throughout Northwest Arkansas.

"These are things that we as international students are trying to do and kind of get local people more engaged with diverse people and diverse cultures," Rajabi said.

Her work with the team has been made even more important following an American military airstrike that killed Gen. Qassem Soleimani, Iran's top general, at Baghdad's international airport, Rajabi said. Reports note the airstrike was intended to disrupt an "imminent" attack being organized by Soleimani.

"I have two younger sisters that are still living in Iran," she said Friday. "This morning I woke up to a text from my 18 year-old-sister after she read the news this morning. She said, 'Then, they will kill us in a few months.'"

Rajabi said her sister fears a war with the United Sates.

"It horrifies me. I talked to her and convinced her that it is not true," Rajabi said. "I have lived here in the United States for almost three years, and I know the American people do not want war and do not want anybody to be killed."

People who haven't gotten to know the United States as well as she has may feel differently, she said.

"If I knew after the 2016 election this would happen, I would have never come to the United States to study," she said. "I really like this country, but politics put so much pressure on my mind, and I am not able to handle it anymore.

"Although I have worked a lot here and created a network of friends and artists that are valuable to me, I am thinking about leaving the United States," Rajabi added. "It is not about individuals. It is about cultural intercommunications and human relationships that could generate peace."

Some 1,384 international students were enrolled at the university in the fall of 2019, said Cynthia Smith, the team's assistant director for outreach. China has the most with 147 students, followed by Panama with 126 and India with 113.

Students participating in the team are often excited to share about where they're from to help others experience a more personal side of countries that may only be reflected negatively in the news, if at all, she said.

"When we bring the conversation to the class, they start talking to each other about the culture or the country that they just learned about," she said. The awareness they gain will effect change overtime.

Having an artist such as Rajabi on the team adds value to the experience for participants, Smith said.

"We always liked to be interactive. Sometimes our presenters perform, sometimes they cook, sometimes they teach a game, but there's always some sort of activity involved," she said. "We try to bring out their talents and skills, and then as much as we can, try to make that personal connection."

Barriers are broken when people meet face-to-face to have a conversation or learn more about each other, Smith said.

"If we want to make the world little better to live in, we need to understand each other more," Rajabi said. 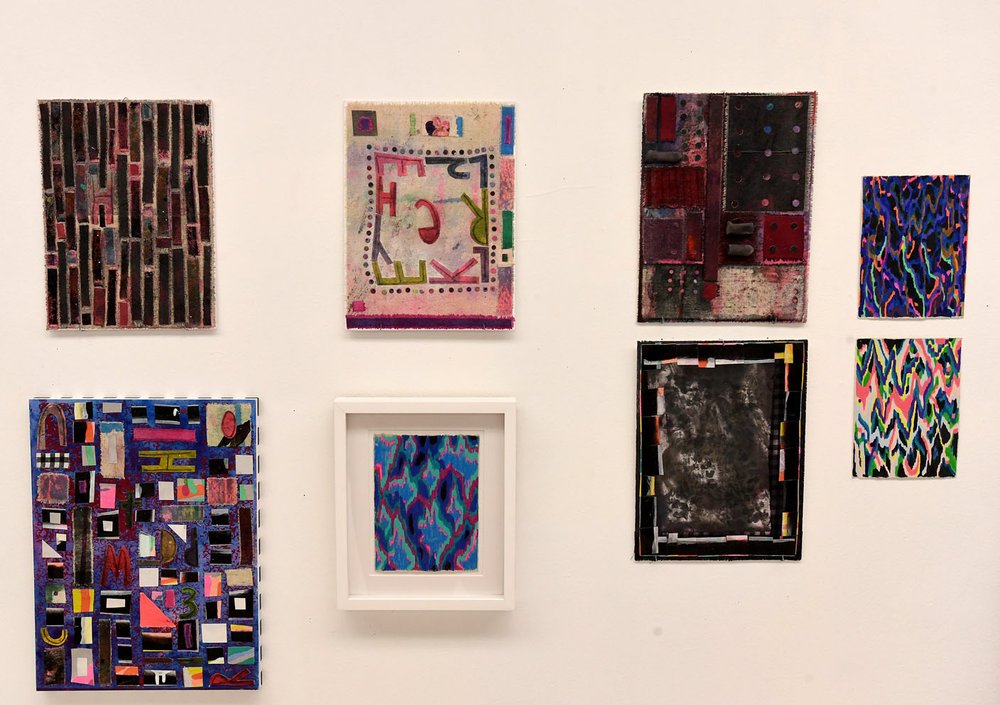 NWA Democrat-Gazette/J.T. WAMPLER Art is on display by Iranian artist Ziba Rajabi in her Fayetteville studio. Rajabi, 31, said she tries to create a tiny history in her work by making layers of watery and washed paint. She at times integrates material such as wire and yarn.

Caspar David Friedrich (Sept. 5, 1774 - May 7, 1840) was a landscape painter of the 19th century German Romantic movement, of which he is now considered the most important painter.

His primary interest as an artist was the contemplation of nature and his often symbolic and anti-classical work seeks to convey the spiritual experiences of life.

Learn more about the artist at www.caspardavidfriedrich.org/.

The iFriend Programs aim to connect international students and scholars with the Northwest Arkansas community. Yearlong programs include the Friendship Family and Campus Cousins programs. One-time experiences include programs such as Lunch or Dinner in An American Home and Thanksgiving Dinner in An American Home. More information on how to get involved or support international students is available online at international-students.uark.edu/events/ifriend-programs/index.php.

Editor’s Note: This is the last article in a series about diversity in the visual arts in Northwest Arkansas.

Listen to a podcast with Mary Jordan at nwaonline.com/podcast.