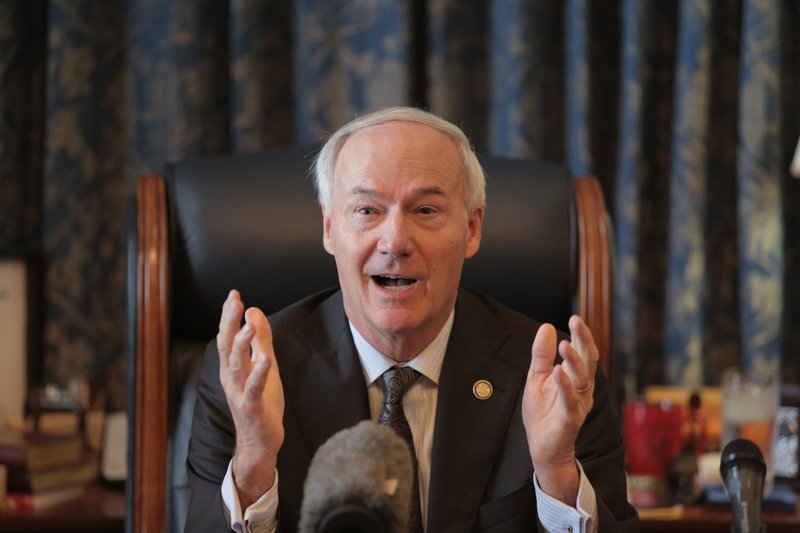 Arkansas' general-revenue tax collections in December increased by $7.7 million, or 1.3%, over total collections in the same month a year ago to $613.6 million and beat the state's forecast by $5.3 million.

The collections for the state government's two largest sources of state general revenue -- individual income and sales and use tax collections -- increased last month over December 2018 figures by 3.1% and 4.3%, respectively, the state Department of Finance and Administration officials said in their monthly revenue report.

Sales tax collections in December from retailers largely reflected their sales to consumers in November and didn't include Cyber Monday, which was Dec. 2.

Total general revenue collections are a record for the month of December, exceeding the previous record of $605.9 million set in December 2018, said Whitney McLaughlin, a tax analyst for the finance department.

December is the sixth month of fiscal 2020, which started July 1.

"The good news is that we are halfway through the fiscal year, and we are $93 million over our revenue forecast," Gov. Asa Hutchinson said Friday.

"The month of December resulted in a more modest increase over forecast, but I am confident that the state is in a favorable financial position as we enter the last half of the year," the Republican governor said in a written statement.

"This is the result of a growing economy and a cautious approach to budgeting," Hutchinson said.

Tax refunds and some special government expenditures come off the top of total general revenue, leaving an amount that state agencies are allowed to spend.

This fiscal year's general revenue budget totals $5.75 billion, an increase of $124.1 million from fiscal 2019's budget, with most of the increase targeted for human services and education programs. The Republican-controlled Legislature and the governor enacted the budget during last year's regular session.

In 2015, the Legislature enacted Hutchinson's plan to cut rates for people with taxable income between $21,000 and $75,000 a year, which state officials projected would reduce tax collections by about $100 million a year.

In 2017, the Legislature approved the governor's plan to cut rates for people with taxable income below $21,000 a year, which state officials projected would reduce tax collections by about $50 million a year, starting in fiscal 2020.

In the 2019 regular session, lawmakers also enacted a measure to require out-of-state internet retailers to collect and remit sales taxes on in-state purchases; a measure to phase in cuts in corporate income-tax rates over the new few years; and a law imposing a wholesales tax on gas and diesel fuel and raising registration fees on electric and hybrid vehicles to help raise more money for highways and roads.

According to the finance department, December's general revenue included:

• An $8.3 million increase in individual income tax collections over the same month a year ago to $276.9 million, which lagged the state's forecast by 4.2%.

The largest category of individual income tax collections is withholdings.

John Shelnutt, the state's chief economic forecaster, said that estimated payments surged in December 2017 to $38 million due to the effect of the federal tax overhaul on taxpayer strategy, then fell to $16.8 million in December 2018 and for last month, "we had it coming back to a historical baseline of $30 [million].

"That didn't happen. It came in at $16.1 [million], so I think it's a new normal for people. Those individuals don't need to pay early [in December rather by Jan. 15] because there is a cap on what they can deduct from state and local taxes," he said. Shelnutt said he expects these individual tax collections to be paid in January.

• A $9.4 million increase in sales and use tax collections from the same month a year ago to $225 million, which exceeded forecast by $1.3 million.

"That was a good month for sales tax with one exception," Shelnutt said. "The large retail component of sales tax was barely positive and it was the calendar shift ... kicked Cyber Monday, for example, into Dec. 2. That's January collections, not December."

Finance department Secretary Larry Walther added, "So we'll get those in January, not in December."

Shelnutt said general revenue sales taxes on motor vehicles increased by $4.2 million, or 19%, over the same month a year ago to $26.2 million.

December is the fifth month that the state has been paid revenue under Act 822 of 2019, which requires out-of-state internet retailers to begin collecting and remitting taxes on in-state purchases. State officials have projected Act 822 will raise $21.8 million this fiscal year.

"We are running about double the monthly estimate on the marketplace sellers' portion of internet sales," Shelnutt said, referring to most of the internet sales tax collections.

• A $13.5 million decrease in corporate income tax collections from a year ago to $74.1 million, which still beat forecast by $7 million. One-time payments contributed to collections in December 2018.

December is the fifth month in which Oaklawn Racing Casino Resort in Hot Springs and Southland Casino Racing in West Memphis are paying a lower state tax rate under Amendment 100 to the Arkansas Constitution, approved by voters in November 2018.

Amendment 100 allows Oaklawn and Southland to operate as full-fledged casinos and authorizes new casinos in Jefferson and Pope counties, the latter with the approval of local officials. The Saracen Casino Annex, across the street from the Saracen Casino Resort under construction in Pine Bluff, started operations in late September.

Under Act 416 of 2019, casino-related revenue above $31.2 million will be diverted to the state Department of Transportation, which will be guaranteed a minimum $35 million a year from casino revenue, a restricted reserve fund and other sources. Act 416 also instituted a new wholesale sales tax on fuel and raised registration fees, effective Oct. 1.

These taxes, fees and reallocations of state revenues are projected by state officials to raise about $95 million more for state roads and about $13 million a year apiece for cities and counties. These taxes and fees are considered special revenues, not general revenues. 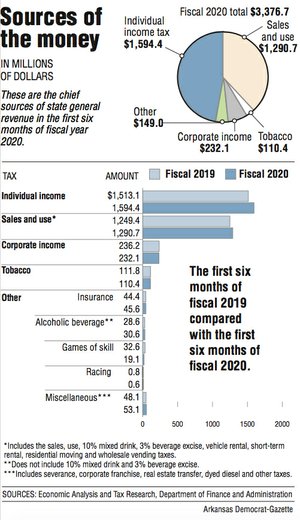