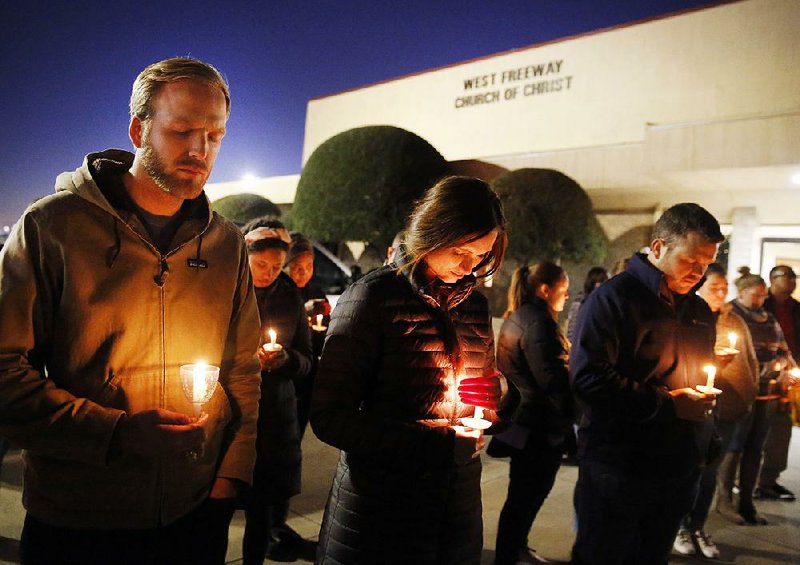 Church and community members, including Matt Pacholczyk (left) and his wife, Faith Pacholczyk, stand outside West Freeway Church of Christ for a candlelight vigil in White Settlement, Texas, on Monday. The machete attack on a rabbi’s home in Monsey, N.Y., during Hanukkah and the shooting of worshippers at a Texas church are refocusing attention on how vulnerable worshippers are during religious services. FBI hate crime statistics show there is reason for concern. (The Dallas Morning News via AP/Tom Fox)

NEW YORK -- When a machete-wielding attacker walked into a rabbi's home in Monsey, N.Y., during Hanukkah and a gunman fired on worshippers at a Texas church 14 hours later, the two congregations in different regions of the country joined a growing list of faith communities that have come under attack in the United States.

It is a group that crosses denominations and geography and has companions around the world. The frequency of attacks has faith leaders and law enforcement grappling with how to protect people when they are at their most vulnerable.

FBI hate crime statistics show that incidents in churches, synagogues, temples and mosques increased 34.8% between 2014 and 2018, the last year for which FBI data are available.

"For a person bent on hate crime against a particular religion or race, you go to a place where you know a lot of people in that group will be congregating -- and vulnerable," said James Alan Fox, a criminologist at Boston's Northeastern University. "One place you can go to find people of a certain religion is where they worship." Most congregations, he said, do not have security.

Three of the deadliest attacks on congregation members have occurred since June 2015, when a gunman killed nine people at Emanuel African Methodist Episcopal Church in Charleston, S.C., according to a database compiled by The Associated Press, USA Today and Northeastern University. The database includes attacks where four or more victims are killed.

However, the database wouldn't include the most recent attacks that have refocused attention on the security vulnerabilities at religious institutions.

The FBI's hate crime highlights list a number of crimes, including a Colorado plot to blow up a synagogue, an Oregon man sentenced to federal prison for targeting a Catholic Church and two guilty pleas in the bombing of an Islamic Center in Minnesota where congregants were worshipping in the mosque.

A five-year compilation of AP reports showed the frequency of attacks countrywide.

Recent stories included the stabbing of an Orthodox Jewish man as he approached the driveway of his synagogue in Monsey in November, as well as a Las Vegas incident where a suspect torched a Buddhist temple, then shot toward at least one monk fleeing the fire.

The data are definitive enough that the FBI invited faith leaders to its Washington headquarters in June to discuss how to protect themselves and their congregants from bias-based attacks.

"Our first responsibility is to make sure our congregants have faith in God and second, that they are safe," Whitlock said. "We must not create an environment of fear, but we also must not fail to recognize things do happen and evil is present."

Reid has a paid security staff of about 20 who wear uniforms and are armed. There are volunteers as well, made up of former and current federal agents, law enforcement officers and military who also provide security, Whitlock said.

Even with the protection, he is watchful. On Sunday, he was in the pulpit and saw the security force reacting to something. They explained later it was a stranger they wanted to identify.

"When you're looking at thousands of people and you see your security force walking around, your mind begins to wonder," he said.

The new spate of anti-Semitic attacks has added to the sense of urgency that has been felt by Jewish security experts since the 2018 massacre at Pittsburgh's Tree of Life synagogue, where 11 people were killed.

"The greatest adversary we truly face is not an external threat, it's a sense of denial," said Michael Masters, national director of the Secure Community Network. It was formed by leading Jewish organizations in 2004 to coordinate a response to security threats.

"The conversation prior to Pittsburgh was whether safety and security was necessary," Masters said. "Now, it's a question of how do we effectuate that -- there's now a reality that these events can happen anywhere."

Sunday's attack in White Settlement, Texas, in which the gunman was shot dead by a highly trained leader of the church's security team, came barely two years after more than two dozen people were killed at a church in Sutherland Springs, Texas. That remains the deadliest shooting at a house of worship in the U.S. in modern times.

The two Texas attacks have heightened worries among churchgoers in neighboring Oklahoma, said the Rev. Derrek Belase, a former police officer turned pastor who coordinates security training for the more than 480 United Methodist churches in Oklahoma.

"Texas is close to home for us," Belase said. "People see it on the news and think, 'That could be us.'"

Under Oklahoma law, houses of worship are among the places where adults are allowed to carry firearms, whether concealed or openly. Churches can ask worshippers not to bring guns with them, but Belase says that's not a common request.

When Belase is advising churches on security, his core recommendations are to work in tandem with local law enforcement, be wary of for-profit security consultants and be sure that members of any church security team are thoroughly trained.

The security team leader in White Settlement "wasn't just a guy with a gun," Belase said. "He was trained to do that."

Pardeep Singh Kaleka, executive director of the Interfaith Conference of Greater Milwaukee, said his own Sikh temple has armed guards and an evacuation plan, the result of a 2012 attack in Oak Creek, Wis., that killed six worshippers, including his father. He said the conference members talk regularly about how to prevent the next tragedy. "All faiths want to remain open, Buddhists, Sikhs, Muslims, Jews, Christians, but you also have to be vigilant and institute safety protocols."

Information for this article was contributed by Rhonda Shafner of The Associated Press. 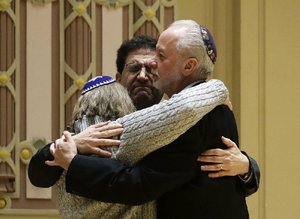 Rabbi Jeffrey Myers (right), of Tree of Life/Or L’Simcha Congregation, hugs Rabbi Cheryl Klein (left) of Dor Hadash Congregation and Rabbi Jonathan Perlman during a community gathering in 2018 held in the aftermath of a deadly shooting at the Tree of Life Synagogue in Pittsburgh. (AP/Matt Rourke)