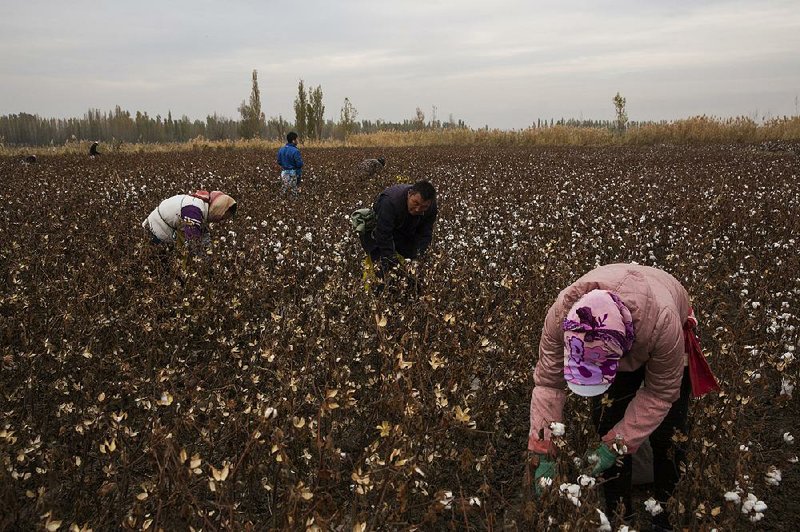 This cotton farm is near Qapqal County, in the Xinjiang. The Communist Party wants to remold minorities in the Xinjiang region into loyal blue-collar workers to supply Chinese factories with cheap labor. (The New York Times/Adam Dean)

KASHGAR, China -- The order from Chinese officials was blunt and urgent. Villagers from Muslim minorities should be pushed into jobs, willing or not. Quotas would be set and families penalized if they refused to go along.

"Make people who are hard to employ renounce their selfish ideas," the labor bureau of Qapqal, a county in the western region of Xinjiang, said in the directive last year.

Such orders are part of an aggressive campaign to remold Xinjiang's Muslim minorities -- mostly Uighurs and Kazakhs -- into an army of workers for factories and other big employers. Under pressure from authorities, poor farmers, small traders and idle villagers of working age attend training and indoctrination courses for weeks or months and are then assigned to stitch clothes, make shoes, sweep streets or fill other jobs.

These labor programs represent an expanding front in a major effort by China's leader, Xi Jinping, to entrench control over this region, where these minorities make up about half the population. They are crucial to the government's strategy of social re-engineering alongside the indoctrination camps, which have held 1 million or more Uighurs and Kazakhs.

The labor bureau of Qapqal ordered that villagers should undergo military-style training to convert them into obedient workers, loyal to employers and the ruling Communist Party. "Turn around their ingrained lazy, lax, slow, sloppy, freewheeling, individualistic ways so they obey company rules," the directive said.

The government maintains that the Uighur and Kazakh villagers are "rural surplus labor" and are an underemployed population that threatens social stability. Putting them in steady, supervised government-approved work, officials say, will erase poverty and slow the spread of religious extremism and ethnic violence.

The government describes the laborers as volunteers, though critics say they are clearly coerced. Official documents, interviews with experts, and visits by The New York Times to Xinjiang indicate that local plans uproot villagers, restrict their movements and pressure them to stay at jobs.

Experts say those harsh methods can amount to forced labor, potentially tainting the global supply chain that uses Xinjiang workers, particularly for cotton goods. Japanese retailers Muji and Uniqlo say they have used cotton from the region, while Walmart has bought goods from a company that until recently used workers from Xinjiang.

Given the tight control on Xinjiang, "we have to assume for the moment that there's a very significant risk of coercion," said Amy Lehr, director of the human rights initiative at the Center for Strategic and International Studies and the co-author of a study on Xinjiang's labor programs.

Forced labor could arise "even if the coercion was implicit or the programs offered workers a decent income," she added.

The labor programs operate in parallel with the indoctrination camps in Xinjiang that have drawn condemnation from Western governments. Camp inmates also receive job training, and officials say that many will be sent to work in factories.

Taken collectively, the policies are designed to make the region's Muslim minorities more secular and urbanized like China's Han majority. Many Chinese people see that as laudable. Uighur critics see it as ethnic subjugation.

"What they are trying to do is assimilate the Uighur people," said Mustafa Aksu, a program coordinator at the Uyghur Human Rights Project.

The factory run by the Jinfujie Clothing Co. on the sandy edge of Kashgar, a city in southern Xinjiang, has been a star in the government's labor campaign.

Jinfujie, which calls itself Golden Future in English, trained and employed 2,300 workers from villages. It also opened a branch factory in an indoctrination camp, where it would put to work more than 500 inmates, a company executive told officials last year.

The executive, Sun Yijie, a former soldier, said the company ran a tight ship to turn villagers into workers. "Beginning with military drills before they start their jobs, we foster a sense of discipline," he said.

Video footage posted online shows Jinfujie workers in gray-and-orange uniforms lined up for a pep rally. "A successful future," they shouted in unison.

The labor programs depend on luring companies from China's wealthier eastern seaboard, where fewer young people want to work on production lines. Xinjiang has offered manufacturers inexpensive labor, as well as generous tax breaks and subsidies.

"They're still not as fast as workers from other parts of China," said He Ta, a businessman who owns a small factory on the outskirts of Hotan, a city in Xinjiang.

The government's goals are sweeping. One plan issued in 2018 called for putting to work 100,000 people from the poorest parts of southern Xinjiang, a heavily Uighur area, by the end of 2020. The government recently said that target was met a year ahead of schedule. By late 2023, another plan says, Xinjiang wants 1 million working in its textile and garment industries, up from about 100,000 in 2017.

At He's factory, dozens of Uighur women from nearby villages sat wordlessly in rows sewing school uniforms. Guzalnur Mamatjan, a 20-year-old Uighur, said she made about $200 a month.

"I'd like to work here for two or three years and then open my own clothes shop," she said in a brief interview in the presence of officials.

Jutting out against desert dunes, the new industrial zones in Xinjiang are often surrounded by high walls, barbed wire and security cameras. Some are built near indoctrination camps and employ former inmates.

Xinjiang's drive to put minorities in jobs often feels less like a jobs fair and more like a military call-up.

Trainee laborers often first attend political courses similar to those used in the indoctrination camps. They practice military drills, learn patriotic Chinese songs, and listen to lectures warning against Islamic zeal and preaching gratitude to the Communist Party. New laborers are sometimes shown in Chinese media reports wearing military-type uniforms and standing to attention as they are escorted to their employers.

Many are separated from their families. A directive from the Qapqal government ordered children of working couples to be put in care -- home villages for the young, boarding schools for older ones -- so their parents could move for work.

Workers' movements are highly controlled if they are far from home. In Yanqi County in the region's north, workers sent from the south are not allowed to quit unless they get written permission from several officials, according to rules by the local government.

Labor recruits undergo "political vetting" to determine if they are a security risk. In Qapqal County, officials imposed rules to grade potential recruits from most to least trustworthy. The least trustworthy had to attend indoctrination classes in the evenings, while only the most trusted could leave the county for work.

"There is a great deal of pressure placed on individuals to sign work contracts," said Darren Byler, an expert on Xinjiang at the University of Colorado at Boulder.

Byler said many residents believed that resisting work transfers could prompt detention. "The threat of the camps hangs over everyone's heads, so there is really no resistance to assigned factory work," he said. 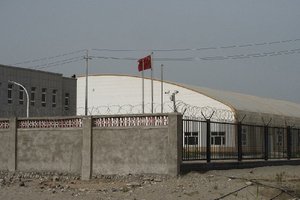