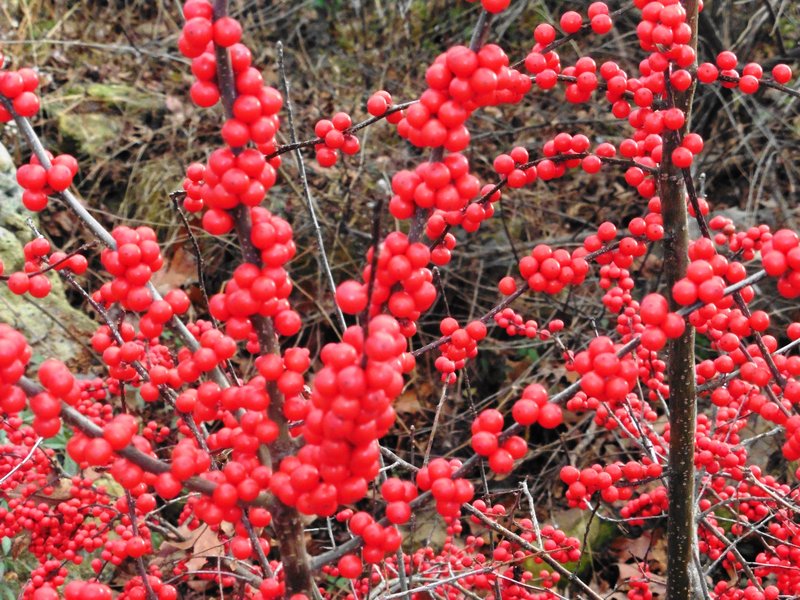 Deciduous holly, aka possum-haw, drops its leaves for winter but compensates with brilliant little fruits. (Special to the Democrat-Gazette/Janet B. Carson)

We ended 2019 with springlike weather and seem to be starting 2020 with continued mild weather. Long-range forecasts predict higher than normal temperatures, but who knows what we can expect for the rest of 2020?

• Wildly fluctuating temperatures can be hard on our plants. I have been seeing blooms on 'Encore' azaleas in the past few weeks and new growth coming back on fennel, butterfly bushes and a few other plants that should be dormant. Pay attention to your garden this winter. We can't stop new growth or flowers from opening, but we can cover tender vegetation if really low temperatures come our way, or we can cut some flowers to enjoy inside.

• Hellebores are popping, with new growth and some blooms on early-blooming varieties. The Sasanqua camellias are in full glory with a few Japonica camellias showing color.

• If mild weather continues, more and more plants will begin growing. Watch your mahonia and flowering quince for early blooms.

• Some gardeners did experience cold damage on their shrubs in November with the early cold snap. It is still too early to deal with that damage. Continue to ignore it until late February or March. Even though mild weather is predicted, predictions can be wrong and the damaged foliage can be a buffer preventing deeper damage.

• It is not unusual to be seeing some foliage on your spring-blooming bulbs now. Whatever you do, don't damage the foliage that is emerging. The foliage is how they manufacture food and grow, and they only have one set of leaves inside the bulbs. Flower stalks shouldn't start growing for a few weeks at least, but we may have an early spring if mild weather continues.

• If you still have some bulbs that you didn't get planted, do so soon. They need exposure to low temperatures to stretch and elongate, and we haven't had too many cool days yet.

• Winter weeds are thriving with our humid, moist and warm days. From henbit and chickweed to dandelions and spurweed, winter weeds are growing fast. For annual winter weeds with shallow root systems, a sharp hoe makes easy weeding, and hand-pulling isn't hard; but more seem to follow quickly. In the lawn, broadleaf weed killers can be used on a mild day with good results. Perennial weeds such as dandelions and wild garlic and onions are a bit more tenacious, but herbicides or spot-pulling do work.

• It has been a great season so far for winter annuals. Pansies and violas are thriving. Some of the early planted Swiss chard is slowly making a comeback from early cold damage, but the other winter greens, including flowering kale, cabbage and mustards, are looking great. Some blooms are coming on dianthus, and dusty miller is growing strong. Fertilize at least once a month on a mild day, or right before a rain.

• The herb garden is also doing well. Parsley and cilantro love this weather and are growing rapidly. Rosemary is blooming, and sage, thyme and oregano are other evergreen herbs. If you don't grow your own herbs, consider starting. It is so nice to go forage in the garden to use fresh herbs when you are cooking, and you only have to harvest what you need for that meal: There's no waste. 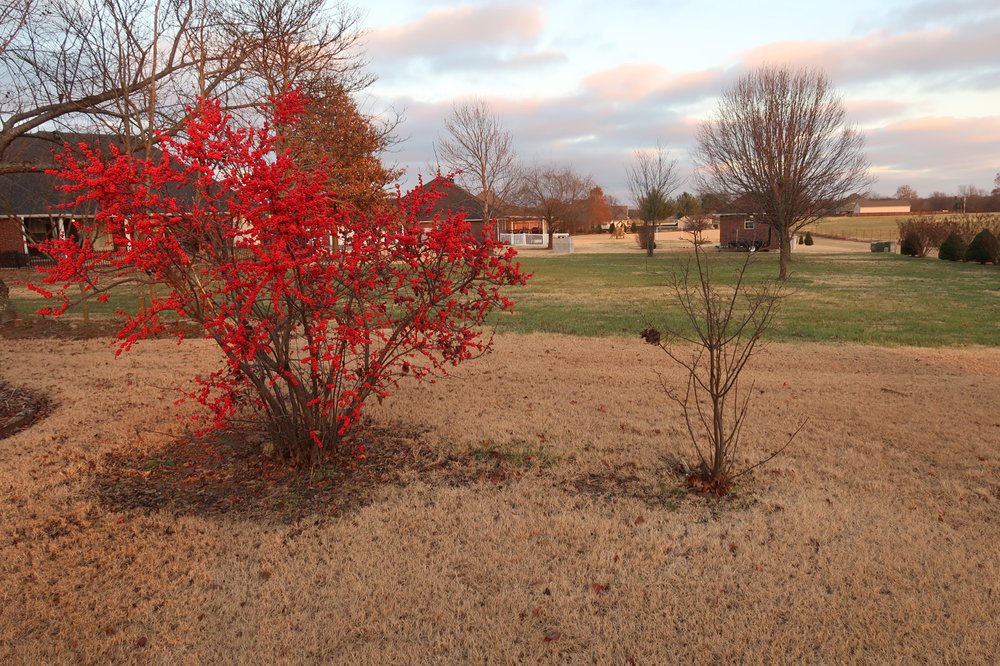 Proximity to a male deciduous holly (small shrub at right) is required for the female holly (left) to bear red fruit in winter. (Special to the Democrat-Gazette/Janet B. Carson)

NATIVE PLANT OF THE MONTH

Both are beautiful and can add color to the winter landscape. 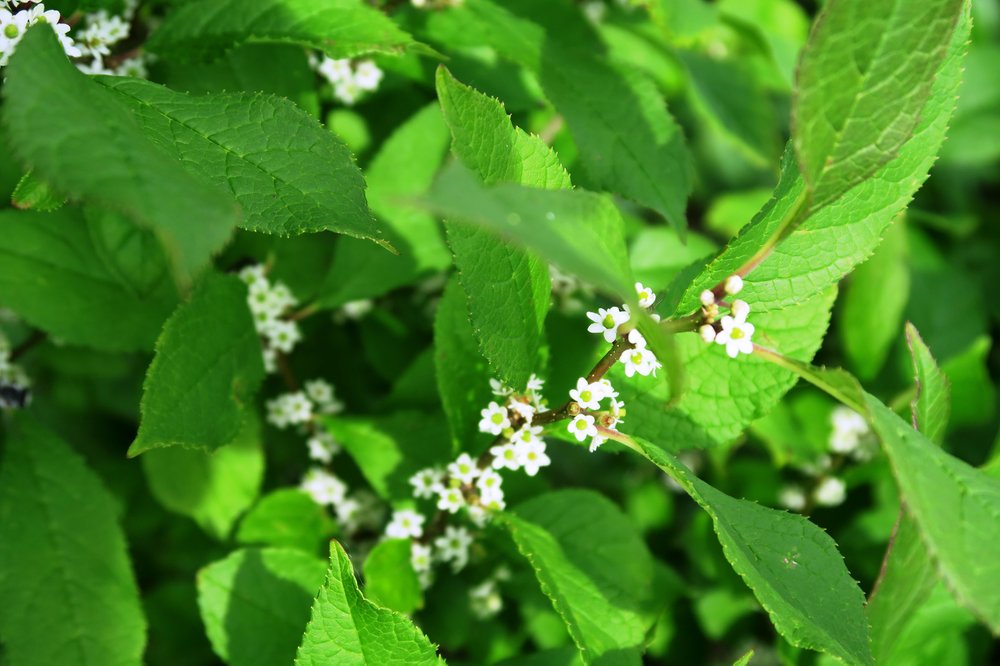 'Sparkleberry' is a variety of deciduous holly. (Special to the Democrat-Gazette/Janet B. Carson)

Typically, there are plenty of hollies in landscapes with male plants that can aid in pollination. Ilex verticillata will produce better berries if you plant a male cultivar in with the females. Some that are usually readily available:

For the Ilex decidua plants, the most commonly sold variety is 'Warren's Red' for the female and 'Red Escort' for the male plant.

Usually one male plant is all that is needed to pollinate four or five female plants.

Deciduous hollies make excellent large bushes or small trees in the sunny landscape. They have nice green foliage during the growing season, but the females shine in the winter landscape when the leaves drop to allow the fruits to show their full glory.

The berries are an important food source for many birds. Full sun is best, but with at least six hours of sun they can set fruit. They appreciate some added water during extended dry periods. 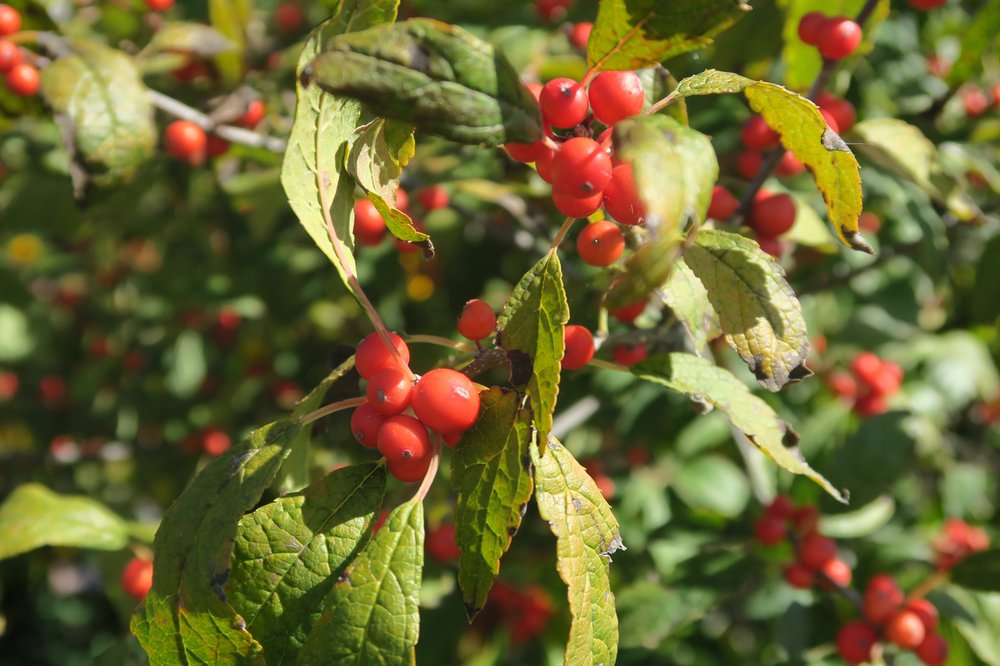 Deciduous hollies are native to Arkansas. (Special to the Democrat-Gazette/Janet B. Carson)