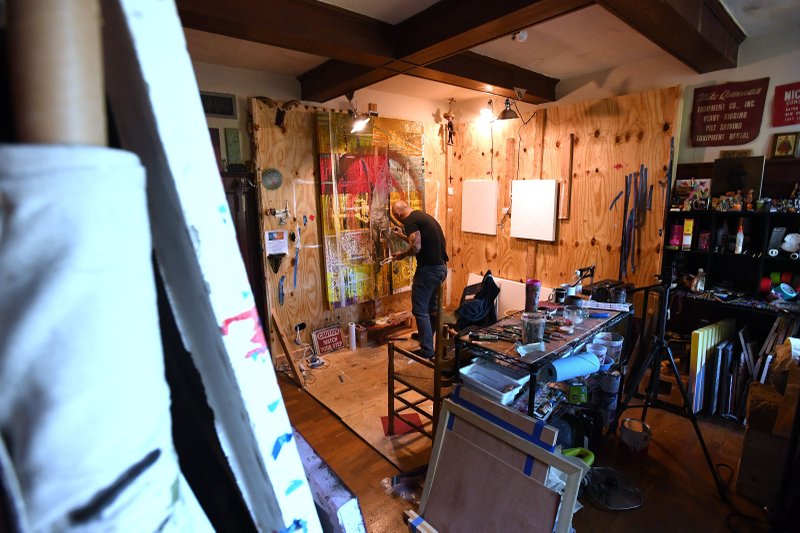 NWA Democrat-Gazette/J.T. WAMPLER Jody Travis Thompson of Fayetteville paints Oct. 17 in his studio. "There are certain types of art that are sort of interventions into society," Thompson said. "Words can get really combative. Art has this amazing, magical ability to just let somebody quietly observe."

Thompson, 47, identifies as a gay man and stands 5-feet-10-inches tall. He may seem like an imposing figure with his shaved head, tattooed arms and closely shaven beard, until he flashes a ready smile.

The artist creates primarily in oil paints in his studio on Mount Sequoyah in Fayetteville, he said. His works defy predictability as well and include 18-by-20-inch black and white still lifes and colorful, abstract pieces as large as 70-by-100 inches.

"Conceptually, it's driven by mutability and perception as it deals with memory and identity," Thomson said of his art.

His experiences as a gay man are often reflected in his work, he said.

"There are certain types of art that are sort of interventions into society," Thompson said. "Words can get really combative. Art has this amazing, magical ability to just let somebody quietly observe."

Thompson seeks to create work telling stories and reinforcing concepts of perception, perspective and change, he said. The artist referred to some still lifes in his studio as an example, one of which included an image of a ball of nails.

"A ball of nails is just a ball. It can be handled, but it has to be handled very tenderly," he said. "Before coming out, my identity was just like picking up a very nail-encrusted ball."

The realism of the still lifes has a tendency to be more narrative in its representation of his experiences, Thompson said, while his abstract pieces may encourage viewers to experience the world differently.

Having conversations concerning the LGBTQ community through art allows for a creative way to stimulate discussion and greater understanding.

"I don't want to be preached at, and I'm not going to preach," Thompson said.

LGBTQ stands for lesbian, gay, bisexual, transgender and queer or questioning, and describes a person's sexual orientation or gender identity, according to GLAAD, formerly the Gay & Lesbian Alliance Against Defamation.

GLAAD works through entertainment, news and digital media to encourage acceptance of the LGBTQ community. LGBTQ includes individuals who identify with a facet of the acronym, according to GLAAD. Many use the acronym with an added + to recognize even more diversity and broaden the understanding of people who identify as pansexual, asexual and nonbinary, among other identities.

"One of the things that is driving diversity within the LGBTQ+ community is we're at the beginning of starting to not really ascribe to what hegemonic society says our community looks like," Thompson said.

He acknowledges understanding the diversity within the community may be difficult to grasp.

"The tricky thing about looking at this community is to start to discard sexual organs when thinking about gender identity," he said.

Observing a person isn't enough to understand how someone identifies, he said, noting a woman walking down the street may not identify in the same way as she appears. 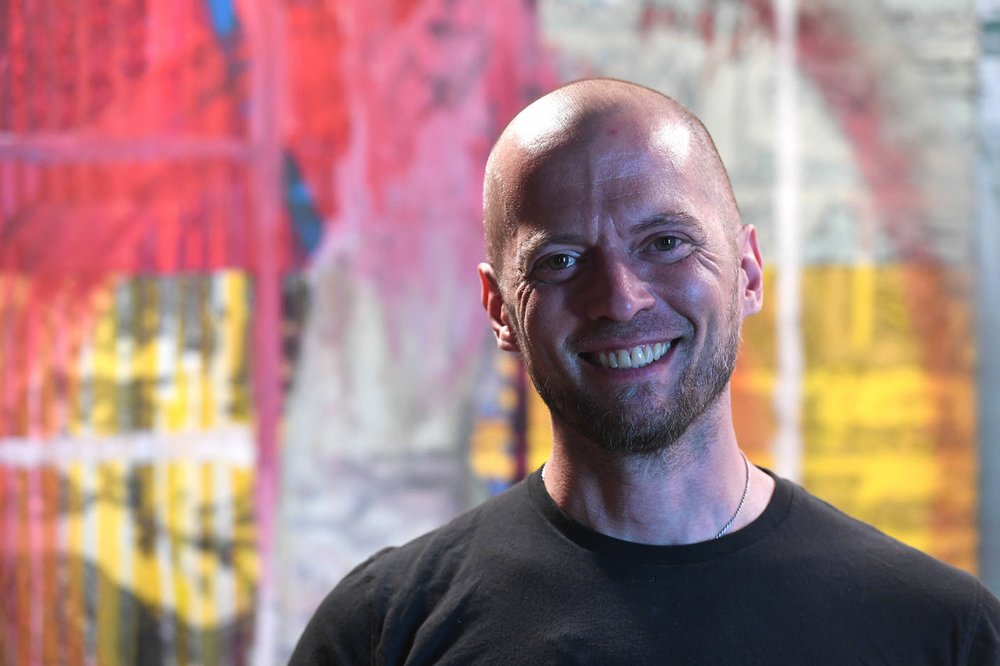 NWA Democrat-Gazette/J.T. WAMPLER Jody Travis Thompson creates primarily in oil paints in his studio on Mount Sequoyah in Fayetteville, he said. His works defy predictability as well and include 18-by-20-inch black and white still lifes and colorful, abstract pieces as large as 70-by-100 inches.

The percentage of adults who identified as LGBTQ nationally was 4.5% in 2017, the most it's been in six years, according to the Gallup Daily Tracking survey. The increase has been driven mainly by millennials, who report being LGBTQ increased from 5.2% in 2011 to 8.1% in 2017.

The Gallup survey gathers opinions on issues from 1,000 U.S. adults daily 350 days of the year.

The District of Columbia has the highest LGBTQ population nationally at 9.8%, followed by Oregon at 5.6% and Nevada with 5.4%, according to The Williams Institute at the University of California, Los Angeles.

Arkansas has a relatively low population in comparison, tying with Wyoming and Kansas at 3.3%.

Laws and policies to protect the rights of the community are lacking, said Eva Madison, a lawyer with the Littler Mendelson office in Fayetteville. The international law firm is based in San Francisco.

States have the ability to broaden discrimination laws, but the Arkansas Civil Rights Act of 1993 is very much in keeping with national laws, she said. Same-sex marriage is legal nationally, she said, but Arkansas has no laws to prevent discrimination based on sexual or gender identity in the workplace.

"If a person married to someone of the same sex goes to apply for a job, an employer in Arkansas can legally turn them down because they're gay," Madison said.

Thompson said he has seen the nation become more accepting of the LGBTQ community, despite current discrimination laws.

The artist shared experiences of being assaulted and getting his nose broken when he was younger because he's gay, of hearing the word "faggot" being spoken hatefully from a church pulpit in the '80s and of having to worry about people discovering he was gay when he was still trying to figure out his identity for himself.

Many of the younger members of the LGBTQ community no longer live with the fear he experienced for much of his life, Thompson said.

"They still experience homophobia and discrimination like that, but they don't have that sense that 'I'm going to get killed' that I remember growing up with," he said. "While at the same time, I wish it would go faster, I understand that in our society things have to be taken one step at a time."

Thompson said he'll continue to work to effect change and build understanding through his art, which allows for personal conversations on diversity.

"I like the idea I can make a painting and that it can be on a wall and then I get to go away and somebody can have their own, private experience," he said.

"What we're talking about trying to fix are really surface issues," he said, "to have a society where a person is free to walk about without being attacked either verbally or physically because of their difference."

It's not fair for members of the LGBTQ community to expect everyone to understand all aspects of their identities because their experiences are their own, but discussing aspects that may not be readily evident is a great place to start, he said.

"In a smaller community like this, you have to sort of open the doors a bit wider to each other," Thompson said of Fayetteville. 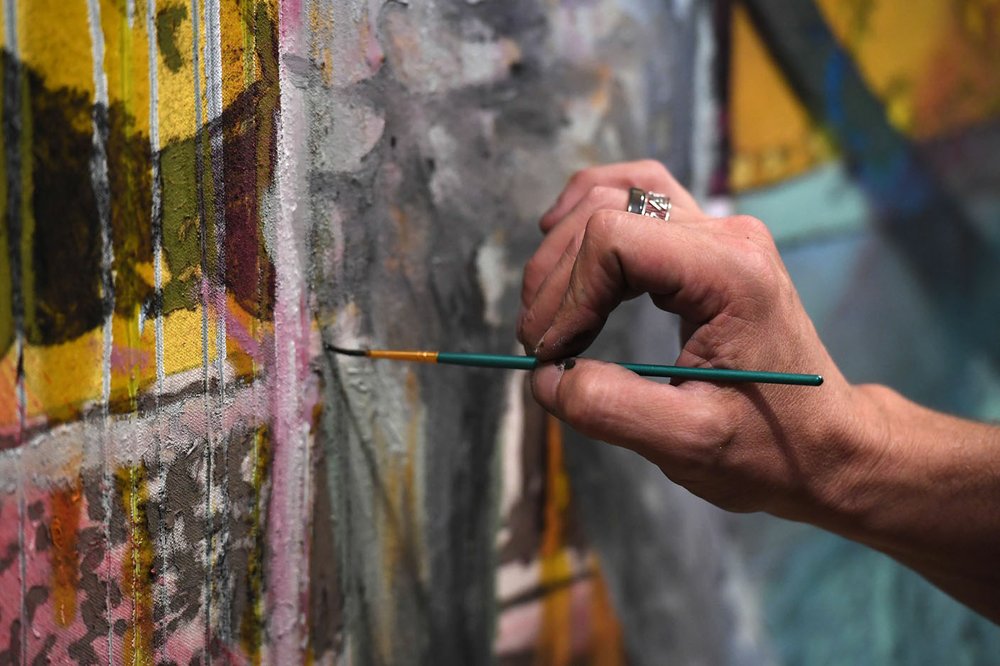 LGBTQ is an acronym for lesbian, gay, bisexual, transgender and queer or questioning. These terms are used to describe a person’s sexual orientation or gender identity.

• Lesbian: A woman whose enduring physical, romantic and/or emotional attraction is to other women. Some lesbians may prefer to identify as gay or as gay women.

• Gay: The adjective used to describe people whose enduring physical, romantic and/or emotional attractions are to people of the same sex. Sometimes lesbian is the preferred term for women.

• Bisexual: A person who has the capacity to form enduring physical, romantic and/or emotional attractions to those of the same gender or to those of another gender. People may experience this attraction in differing ways and degrees over their lifetime. Bisexual people need not have had specific sexual experiences to be bisexual. In fact, they need not have had any sexual experience at all to identify as bisexual.

• Transgender: An umbrella term for people whose gender identity and/or gender expression differs from what is typically associated with the sex they were assigned at birth. People under the transgender umbrella may describe themselves using one or more of a wide variety of terms — including transgender. Many transgender people are prescribed hormones by their doctors to bring their bodies into better alignment with their gender identity. Some undergo surgery as well. Not all transgender people can or will take those steps, and a transgender identity is not dependent upon physical appearance or medical procedures.

• Queer: An adjective used by some people, particularly younger people, whose sexual orientation isn’t exclusively heterosexual. Typically, for those who identify as queer, the terms lesbian, gay and bisexual are perceived to be too limiting and/or fraught with cultural connotations they feel don’t apply to them. Some people may use queer, or more commonly genderqueer, to describe their gender identity and/or gender expression. Once considered a pejorative term, queer has been reclaimed by some LGBT people to describe themselves. However, it isn’t a universally accepted term even within the LGBT community.

• Questioning: When a “Q” is used at the end of LGBT, it can also mean questioning. This term describes someone who is questioning their sexual orientation or gender identity.

The final article in this series about artists in Northwest Arkansas will publish Sunday and feature:

Editor’s Note: This is the sixth in a series of articles about diversity in the visual arts in Northwest Arkansas.