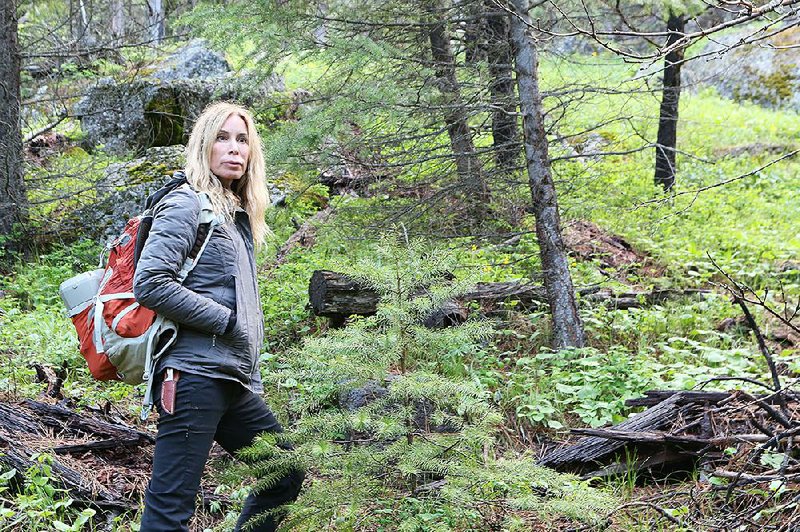 Mireya Mayor earned her doctorate in anthropology and specializes in the study of primates. Her latest mission is as a member of the team tracking the elusive Bigfoot in Oregon on the Travel Channel series Expedition Bigfoot.

ARCADIA, Calif. -- When she was a little girl, Mireya Mayor's parents wouldn't allow her to join the Girl Scouts, saying it was far too dangerous. An only child of Cuban immigrants, she was soundly protected throughout her youth, she says.

When she grew up she made up for lost time. Mayor earned her doctorate in anthropology, specializing in the study of primates. And that academic leap took her to the wilds of Madagascar, the jungles of the Congo and the forests of America's Northwest.

Mayor's intrepid journeys have resulted in the co-discovery of the world's smallest primate and the unearthing of a new frog species.

"I feel equally comfortable and at home in the dense forest -- no running water, no electricity -- as I do in the big city environment. I love being there," she says.

During her forays, Mayor has survived a plane crash in the Congo, been charged by a 450-pound silverback gorilla and been pursued by an unpredictable forest elephant. "The scariest encounters have to do with people, not with animals," she says.

"I've been in some pretty hairy situations in Guyana, for example, with the miners who live out there and were following me down the river. In Congo, I had my passport taken away and thrown into a ditch because, apparently, it wasn't me. So I've had some scary encounters. With animals, I know enough about animal behavior to know what to expect."

But in her latest mission, she has no idea what to expect. Mayor is part of the team tracking the elusive Bigfoot in the wilds of Oregon on the Travel Channel's series Expedition Bigfoot.

She hasn't lost her scientific integrity to do so, she says. "My goal is not any different on this expedition from any traditional expedition that I've been on, which is to find evidence. And that's all I am interested in. Science isn't based on belief, it's based on fact. There are moments where there is a lot of excitement about things found, and I am the inquisitive skeptic. I'm very open-minded," she says.

"I was a pre-law student, former NFL cheerleader, never your 'typical' scientist, and I've always kept an open mind. So I went into this with an extremely open mind also knowing there are more than 10,000 modern-day eyewitness accounts. And those need to be taken seriously because all of them may not be true. What you actually need is one of them to be true to warrant an investigation. In my work as a scientist, there have been endless times when I rely on accounts of the local people when I'm searching for an animal. And I've heard accounts of an animal being in an area when no other scientist believed it could be there, and I myself found it hard to believe, that turned out to be there. So you do need to listen to these stories."

It was her mother, a nurse, who sheltered her as a child, but later encouraged Mayor in her unconventional choices. "She was terrified I was going to Guyana in South America to one of the most remote regions of the Amazon, unexplored -- that I was going to get sick and die in the jungle," she says.

"So for many years, she didn't understand why I kept going back and doing this. So when I had my first daughter, I thought, 'I guess that's it.' And it was mom, who initially didn't want me to do all this, said, 'You can't stop exploring. It's not what you're doing, it's who you are. And you do your daughter a disservice by not being who you are.' She was absolutely right. So I grabbed my baby and went off to Madagascar when she was 9 months old."

Mayor has six children, five by her first husband and a 4-year-old with her executive producer husband of six years. She manages her family with the same precision she applies to her work.

"I treat my life very much like an expedition -- even the logistical planning with six children is no different from what I do when I plan the porters, the food, the timeline, the contingency plans -- plans A, B and C. You can plan and plan and then Africa happens. The same with kids," she laughs.

Filming on Expedition Bigfoot has been completed, and new episodes air at 9 p.m. Sundays on the Travel Channel. And Mayor reports: "What I can say is this, I walked away from Oregon with a completely different way of thinking about Bigfoot and its existence from when I walked in. I saw and experienced things out there that had no logical or scientific explanation, things that really took me by surprise, that perhaps if I hadn't seen with my own two eyes I wouldn't even believe."