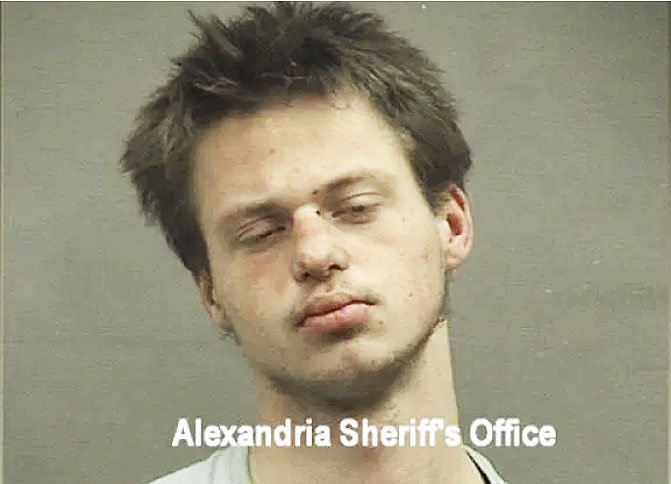 FAYETTEVILLE -- Matthew Richardson, who is facing charges in Arlington, Va., after police say he tried to blow up a car in a Pentagon parking lot, was released from the Washington County jail in December after The Bail Project posted his bond.

The Bail Project, a group working to help poor people avoid pretrial incarceration, has been working in Washington County since September, according to Madeline Porta, a client advocate with the group's Northwest Arkansas office.

Washington County is working on a study of it’s criminal justice system to reduce crowding in the jail. The county has hired the National Center for State Courts to do the study, Sheriff Tim Helder said Wednesday staff from the center have been at the Sheriff’s Office and jail interviewing his staff in the past week. A report from the Center is expected by June, according to county officials.

"We provided free bail assistance to 19-year-old Matthew Richardson last year in a case of alleged theft," Porta wrote in an email Wednesday.

Richardson was arrested in Arkansas on Nov. 27 after police said he stole a 2018 Ford Explorer from the Washington Regional Medical Center parking lot, according to police and court records.

His case shows the need for additional mental health programs for many of those who come into contact with the criminal justice system, Porta said.

"At the time we met him, the teen had been in jail for nearly a week because he could not afford the $2,500 bail," Porta said.

Porta said The Bail Project has provided free bail assistance to nearly 200 people in the jail. She said 90% of those released have appeared for their court dates. Nearly 80% of the group's clients have problems with drug abuse, and almost half described mental health needs.

Richardson, who is listed in police reports as a homeless resident of Fayetteville, was arrested Monday when a Pentagon police officer said he saw Richardson striking a cigarette lighter to a piece of fabric pushed into the gas tank of a 2016 Land Rover, according to a news release from the U.S. Attorney's Office for the Eastern District of Virginia. Richardson fled and was caught at Arlington National Cemetery, adjacent to the Pentagon. He told the officer he was going to "blow this vehicle up" and "himself," according to the release.

Richardson was charged Monday with maliciously attempting to damage and destroy by means of fire a vehicle used in affecting interstate and foreign commerce. If convicted, he faces a mandatory minimum of five years in prison and a maximum penalty of 20 years in prison, according to the U.S. attorney's news release.

He made an initial court appearance Tuesday in U.S. District Court in Alexandria, Va., and was ordered held for a hearing set for today.

The Land Rover is owned by an active-duty service member who didn't know Richardson, according to the release.

"The Bail Project posting his bail is the same as if his grandpa came down and posted it," Helder said.

He added he's concerned the number of detainees being released because of the chronic crowding at the jail makes such incidents more likely. The Sheriff's Office has been releasing more than 200 detainees a month above and beyond those who are helped by The Bail Project.

Helder said Richardson wouldn't have met the criteria for admission to the Crisis Stabilization Unit, which works to divert people with mental health or substance abuse problems away from the criminal justice system.

"The CSU is for people who haven't been arrested," Helder said.

Prosecutor Matt Durrett said he understands people may be concerned by Richardson's actions after his release from jail, but he doesn't think the one incident should be used to hamper the work of The Bail Project.

"It's unfortunate, but I don't think it reflects on them," Durrett said Wednesday. "I don't know to what extent anyone could have known this person was going to do what he has been accused of doing."

Durrett said Richardson's bond was set by a judge and was in keeping with normal standards and procedures. He could have been released through more "traditional" means, by a bail bondsman or family members, Durrett said, with the same outcome.

Stan Adelman, a Fayetteville lawyer and law professor, was hired as a jail ombudsman by the county to reduce overcrowding by identifying detainees who might be likely candidates for release on lower bond or no bond. Adelman said Wednesday releasing any detainee is a "risk management" process.

He said he had heard of Richardson through his work as a volunteer at the 7 Hills Homeless Center in Fayetteville, but wasn't familiar with his criminal case. Adelman said it's important to not let one poor outcome color the effort to reduce pretrial incarceration.

"No. 1, there's no risk-free method when it comes to pretrial detainees and the decision to release them," he said. "The same kind of thing could have happened if this gentleman had the money and put up his own bond. Our focus is on whether people should be released. The Bail Project's appearance rate is pretty favorable compared to the traditional means. I wouldn't want people jumping on any bandwagons or jumping to any conclusions because of this incident."

The 710-bed jail is at its operating capacity when the number of detainees is between 80% and 90% because of legal requirements to separate different classifications of detainees. The jail has reported daily population counts in excess of 800 in recent months. The Washington County Quorum Court has asked Helder to end a contract to house federal inmates and try to move state inmates to other detention facilities to reduce overcrowding.

Helder said he remains convinced the county needs to work toward an expansion of the jail.

"Obviously, in my mind, it's not the best option," Helder said of the number of detainees who are being released. "In our situation, it's an option we have to use. I've always been concerned about some of these possible outcomes. There's always a chance something will happen."

He said the Sheriff's Office provides some programs for detainees who have issues with substance abuse or mental health, but those programs are limited because of the lack of space at the jail.

"We don't have space for classrooms for programs," he said. "It's kind of hit or miss."