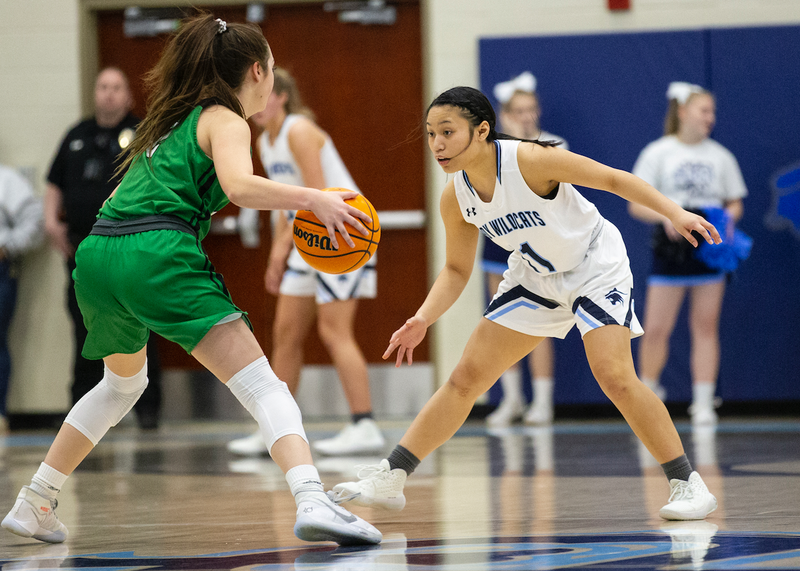 CENTERTON -- Falling behind by 12 points in the first quarter is not where a visiting team wants to be, especially with postseason play at stake.

But Van Buren was able to rally and defeat Bentonville West 42-35 on Tuesday in 6A-West action at the Wolverines' gym. The win greatly improves Van Buren's chance for the No. 6 seed from the 6A-West in the Class 6A state tournament at Bryant.

Bentonville West has to beat Bentonville High and Van Buren must lose at home to Springdale High on Friday to deny the Lady Pointers a berth in the state tournament.

"You want to earn your way into the state tournament," Van Buren coach Chris Bryant said. "It says a lot about our kids on the way they clawed back after being down 12 and on the road against a team that's also fighting for the playoffs. This is how kids grow because our backs were against the wall."

Van Buren (9-17, 3-10) appeared to be in big trouble after falling behind 16-4 late in the first quarter to West. But Van Buren rallied behind the hot outside shooting of Bailee Woodard, who made three 3-pointers in the second quarter and finished with 12 points. Woodard provided another boost when she swished three consecutive free throws in the third quarter after being fouled on a 3-point attempt.

Brooklyn Kannady also finished with 12 points after making 9 of 10 free-throw attempts. Kannady had a steal and made six straight free throws after West got to within 36-35 with 1 minute, 38 seconds left to play.

"Bailee Woodard had a phenomenal first half and kind of kept it going in the second half," Bryant said. "She did a great job and kept us in the game when we were wobbly."

Bentonville West (6-21, 2-11) was worse than wobbly after grabbing a 16-4 lead late in the first quarter. Van Buren regained the lead after holding West to three points in the second quarter and four points in the third quarter.

West still had a chance after Laynee Tapp scored inside to cut Van Buren's lead to 36-35. But West committed an unforced turnover and Van Buren was able to hold onto the lead while making 17 of 20 free throws on the night.

Bentonville closed out the first half with a 14-0 run to pull away from Springdale, and the Lady Tigers clinched the outright 6A-West Conference title with a victory in Bulldog Arena.

Bella Irlenborn led the Lady Tigers with 14, while Riley Hayes scored all 11 of her points in the second quarter. Thaly Sysavanh had 14 points to lead Springdale.

The Lady Wildcats outscored the Lady Mounties 22-5 in the fourth quarter and pulled away for the 6A-West Conference win.

Rogers (16-11, 6-7) cut a double-digit deficit to within 36-33 on two free throws by Aubrey Treadwell. But Har-Ber pushed the lead back to eight after three quarters. Koons hit a 3-pointer to start the fourth for a double-digit advantage and the Lady Wildcats never looked back.

Coriah Beck scored a game-high 22 points and Sasha Goforth added 20 to help the Lady Purple Bulldogs pull away for the win.

The Lady Bears moved one step closer to a perfect run through the 6A-Central with a big road win Tuesday night.

Tracey Bershers led Northside (24-3, 13-0 6A-Central) with 24 points and Jersey Wolfenbarger scored 15. Northside, which had already clinched the No. 1 seed from the Central in next week's Class 6A state tournament in Bryant, closes the regular season on Friday against winless Fort Smith Southside at Arkansas-Fort Smith.