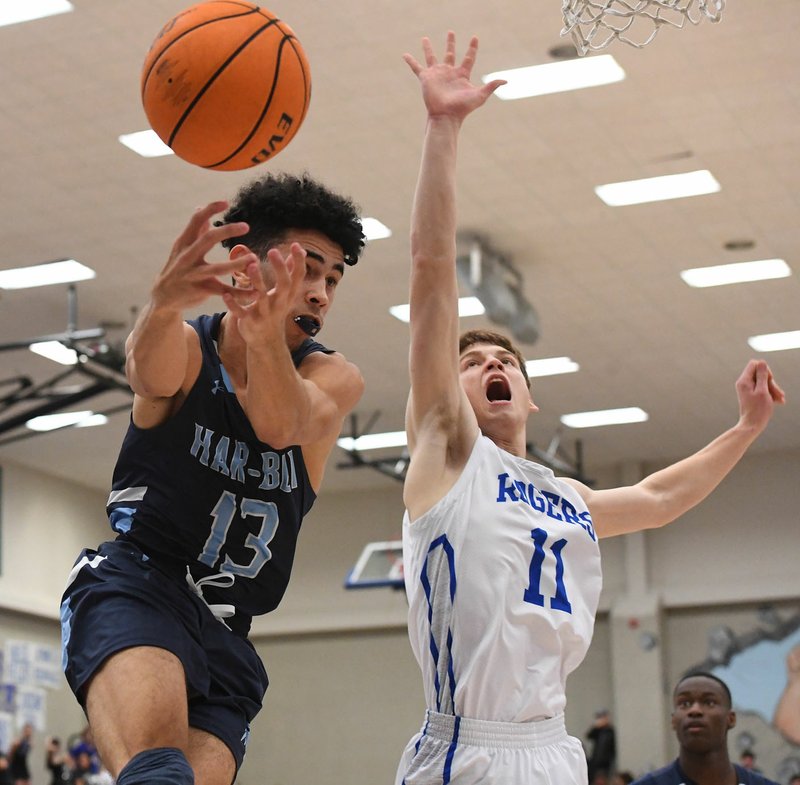 ROGERS -- Springdale Har-Ber coach Tommy Deffebaugh told his players Tuesday night that playing together and doing the dirty work were keys to winning.

The Wildcats did both in the final minutes to earn a 62-53 win over Rogers High on the road and clinch the 6A-West Conference title on Tuesday night.

Har-Ber (21-3, 12-1 6A-West) allowed just one field goal over the final four-plus minutes and outscored the Mounties 12-3 to close the game.

Wildcats coach Tommy Deffebaugh was proud of the way his team came together late in the game.

Drew Miller's 3-pointer from the top of the key tied the game at 50 with 4 minutes, 46 seconds remaining. But the Mounties would only manage a Derek Hobbs 3-pointer with a little more than a minute left the rest of the way.

Senior Lawson Jenkins led the way with a team-high 22 points, but it was his putback basket that gave the Wildcats a four-point lead with under three minutes to play. Har-Ber got three shots at it and Jenkins cleaned it up.

Deffebaugh has told his team all season doing what he calls "the dirty work" like rebounding is a key to victory.

"I told them we gotta have everybody fighting their tail ends off on the glass," Deffebaugh said. "In order to win on the road, you've gotta get on the glass and you've gotta make your free throws.

"And sure enough Jajaun Boyd makes free throws at the end Lawson got that big putback. So it takes all those things to win on the road and win a conference championship."

Rogers (20-4, 9-4) trailed by double digits in the first half but pulled within 34-28 at halftime thanks mainly to the work of Will Liddell. He finished with a game-high 28 points, but 21 of those came in the first half. Hobbs was also in double figures with 12.

The Mounties close the regular season at crosstown rival Rogers Heritage on Friday, while Har-Ber plays host to Fayetteville.

Sawyer Price's layup broke a 36-36 deadlock with around 2 minutes remaining and put Bentonville ahead to stay as the Tigers slipped past Springdale in Bulldog Gymnasium.

Jaylen Lee added another bucket to put Bentonville (17-8, 8-5) up 40-36 before JP Hignite scored against pulled Springdale back within two. The Bulldogs then missed a pair of go-ahead 3-pointers and a game-tying bucket inside just before the buzzer sounded.

Thane Spencer had 11 points and was the only player in double figures for Bentonville. The Tigers played the game short-handed as Brayden Freeman was out with the flu.

Grant James had 11 for Springdale, while Brandon Henry added 10.

Luke Allen made four 3-pointers and finished with 14 points for the Wolverines (10-13, 5-8), who clinched the No. 5 seed from the 6A-West for the state tournament in Bryant. Allen had a key three-pointer in the fourth quarter when West outscored Van Buren 14-7.

C.J. Willliams poured in a game-high 35 points tied a school record with eight 3-pointers to help the Purple Bulldogs pull away in the second half.

Williams will now have his name in the Fayetteville record books alongside Payton Willis. Tamaury Releford chipped in 14. Landon Glasper and Matthew Wayman added 10 points each

Cabot outscored the Grizzlies 6-5 in overtime to claim a big 6A-Central win Tuesday.

In a see-saw game from the start, Northside outscored Cabot 11-8 in the fourth quarter to send the game into overtime.

Print Headline: Har-Ber does the "dirty work" to put away Rogers High