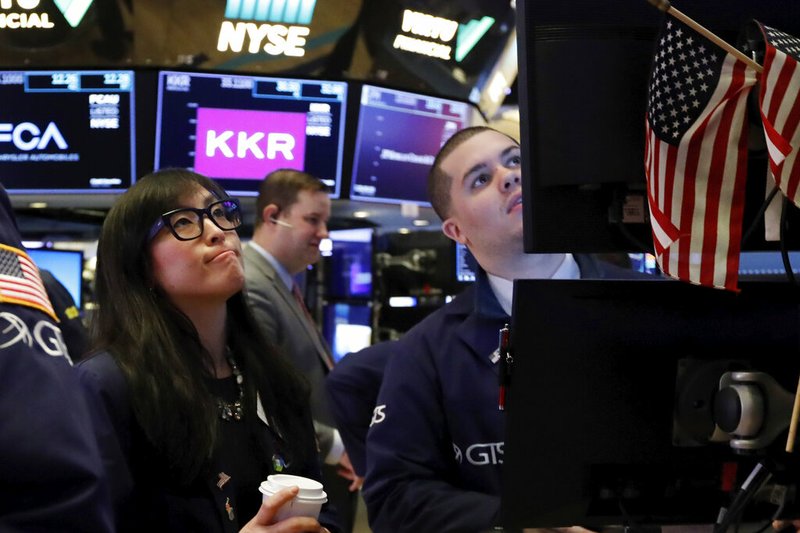 More companies warned that the outbreak will hurt their finances, including United Airlines and Mastercard. Meanwhile, new cases are being reported in Europe and the Middle East, far outside the epicenter of China. The latest cases have raised fears that the virus could spread further.

The decline on Monday sent the Dow Jones Industrial Average more than 1,000 points lower and wiped out its gains for the year. The S&P 500 is now down 5.8% from its record high set last Wednesday.

Technology stocks, which rely heavily on China for both sales and supply chains, once again led the decline. Apple shed 1.7% and chipmaker Nvidia slumped 4.9%.

Real estate companies and utilities held up better than the rest of the market as investors pushed money into safe-play stocks.

VIRUS UPDATE: The viral outbreak that originated in China has now infected more than 80,000 people globally, with more cases being reported in Europe and the Middle East. The majority of cases and deaths remain centered in China, but the rapid spread to other parts of the world has spooked markets and raised fears that it will hurt the global economy.

United Airlines fell 3.7% after withdrawing its financial forecasts for the year because of the impact on demand for air travel. Mastercard slipped 4.2% after saying the impact on cross-border travel and business could cut into its revenue, depending on the duration and severity of the virus outbreak.

STOCK BOOSTER: Moderna surged 13% after the company sent its potential virus vaccine to government researchers for additional testing. The biotechnology company is one several drug developers racing to develop vaccine.

NAILED IT: Home Depot rose 2.1% after the home-improvement retailer's fourth-quarter financial results connected with Wall Street. The company handily beat profit expectations and a reported a surprisingly good jump for a key sales measure. It gave investors a strong profit forecast for 2020 and raised its dividend.

GOOD KARMA: Intuit rose 3.2% after the maker of TurboTax software said it will pay $7.1 billion for consumer finance company Credit Karma. The deal will give one of the most well-known makers of personal finance software a website operator that focuses on helping people monitor their credit and find loans or credit cards.