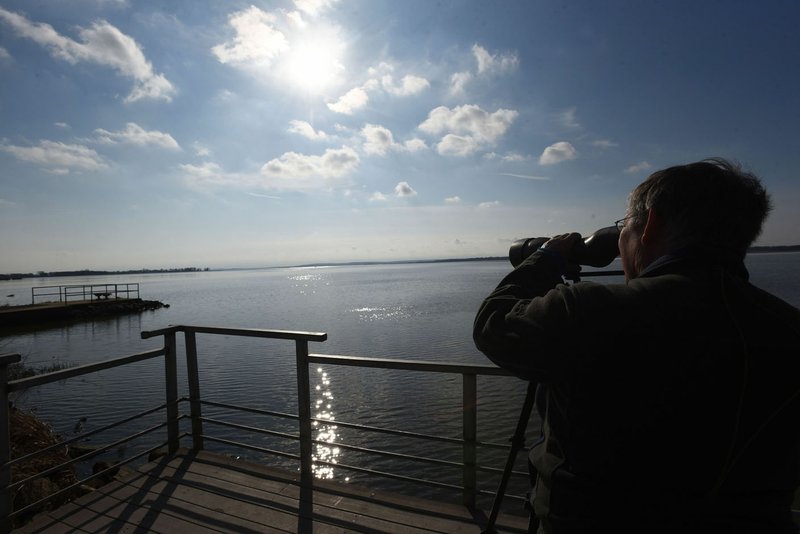 NWA Democrat-Gazette/FLIP PUTTHOFF Joe Neal scans Kerr Reservoir, a pool of the Arkansas River. The wildlife refuge is spread out on both sides of the river.

The Arkansas Division of Environmental Quality has recommended to Gov. Asa Hutchinson changes to its water quality regulation, but the changes won’t include several major items that continue to be deliberated.

The regulation is the chief document used by the state to protect the health of its waters, often through permitting, monitoring or enforcement action.

The proposed update to Regulation 2, required every three years by the Clean Water Act, still doesn’t include a plan for preventing degradation of the state’s waters, which was required by the same act decades ago.

That’s because the agency is still discussing the details of an implementation plan for its “anti-degradation” policy. Policies must, by law, be accompanied by implementation plans that spell out how the agency will determine what prospective wastewater permittees must do to prevent degradation of the state’s waters and the level of protection different waters require.

The changes also don’t include new U.S. Environmental Protection Agency recommendations of allowable toxic substance levels, an omission one critic called “unacceptable.” Consideration of new toxic substance limits will be part of the next “triennial review,” an agency spokesman said.

The next review period starts imminently, according to the Division of Environmental Quality. After the EPA delayed approving the agency’s 2013 changes until 2016, this latest document is actually for the 2016 review.

The proposal, submitted to the governor at the end of January, eventually must go to the EPA for approval. The governor is the first stop in a series of stages requiring approval.

If it receives the governor’s approval, the Arkansas Pollution Control and Ecology Commission, which is the agency’s appellate and rule-making body, would decide whether to begin a rule-making process. That process requires public comment, agency response to comment, and Legislative hearings before final commission approval, which would prompt a final decision on the rule from the EPA.

Most of the 188 changes are required by another document — namely, every reference to a “regulation” must now be changed to “rule,” per a state law passed in 2019.

The EPA awaits what would be the biggest changes to the state’s water quality rules yet.

In October, the EPA sent the Division of Environmental Quality 2½ pages of recommendations for an anti-degradation implementation plan.

Conservation groups have also long awaited a plan in Arkansas, which is one of only two states without one.

“The fact they haven’t gotten around to this is inexcusable,” said Jessie Green, director of the White River Waterkeeper. “Without addressing this, Regulation 2 will remain inconsistent with the [Clean Water Act] and the Natural State’s high-quality surface waters will continue to degrade due to negligence on behalf of our state environmental agency.”

The division convened a six-person working group in 2018 to recommend language to the agency, and the agency continues the drafting process for a plan, division spokesman Jacob Harper said.

Long in dispute with the EPA over the state’s listed allowable levels of minerals — the state no longer wishes to abide by them while the EPA has requested new, scientifically sound limits to replace them — the state has a plan for developing new limits.

The EPA is assisting the state in developing them. The process so far includes continued collection of “paired water chemistry and biological data across ecoregions,” according to Harper.

That means the EPA will continue to allow the state to maintain language in its water quality rules that states the mineral levels listed aren’t to be used to assess whether the waters are “impaired.”

Every other year, the division must prepare a list of “impaired” water bodies, using its water quality regulations. Impairment triggers corrective action, often in the form of a regulatory document outlining lower allowable mineral levels for different entities discharging wastewater into the water bodies.

Ignoring the mineral levels outlined in the existing Regulation 2 goes too far, Green said. The levels were based on a study of real streams that also informed other statewide water quality criteria that aren’t in dispute, she said.

In recent years, the Division of Environmental Quality has placed dozens of permits on administrative “hold,” which allows the permits to be expired but remain active indefinitely. It’s done nearly always because utilities or companies contend they can’t meet stricter mineral requirements. The division also has contended that the mineral levels listed in water quality regulations often reflect the highest-quality water conditions occurring within a region, called “ecoregions,” rather than the conditions of a specific water body.

Companies often pay for studies that justify changes to the waters in which they discharge, and the Pollution Control and Ecology Commission often approves those changes’ adoption into the state’s water quality regulations.

For example the EPA disapproved of a few mineral changes for the Red River and tributaries of Flat Creek, prompting the division to strike those changes from its proposal. The EPA approved other mineral changes, petitioned by companies that discharge into those waters, such as changes to Crooked Creek.

In 2015, the EPA updated its regulations to require states to explain why they have not included any new or changed recommended toxic substances, but Arkansas’ proposal doesn’t include an explanation. The EPA requested an explanation last fall.

Since 2015, the EPA has updated recommendations for cadmium, selenium, aluminum and cyanotoxins, which, an EPA official noted in a letter to the Division of Environmental Quality, aren’t included in the state’s proposal.

The EPA rejected other ideas initially proposed by the division that are no longer included in the final draft submitted to the governor.

For example, the agency plans to change its water quality measurement criteria for lakes and reservoirs, such as temperature or acidity, removing the language that the measurements must take place at a “1.0” meter depth. The EPA said the change could mean criteria wouldn’t apply at other depths.

In an email, Harper said the change would not alter how water quality is assessed in lakes for the biennial “impaired” waters list.

The change, as initially drafted last year, was intended to incorporate a study paid for by Georgia-Pacific, which uses the creek as a part of its wastewater stream. That study found that aquatic life was not supported below Mossy Lake.

A 2007 study, paid for by the EPA, recommended a year-round aquatic life designation for Coffee Creek above and below Mossy Lake and in Mossy Lake. That study has not prompted changes to the state’s water quality rules.

The state’s current water quality regulations indicate no fishable/swimming or drinking water uses for the creek and list no other designations for it.