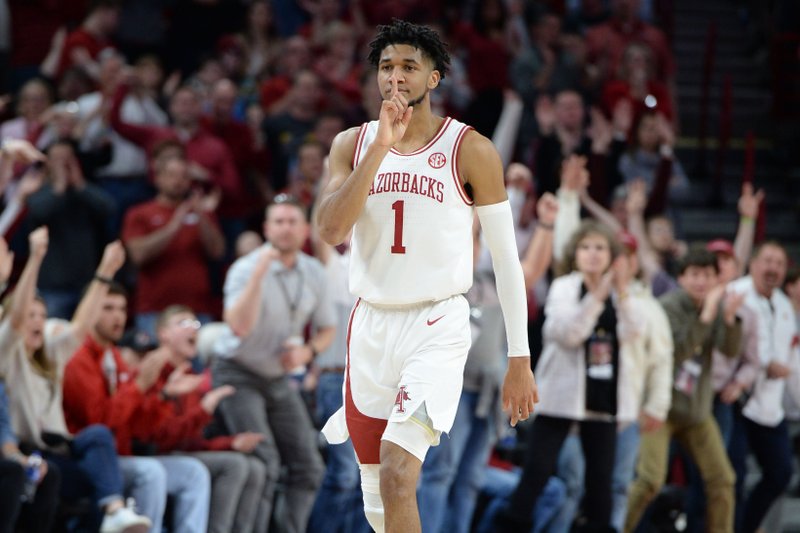 Arkansas guard Isaiah Joe celebrates Friday, Feb. 21, 2020, after hitting a 3-point basket during the second half to seal the Hogs' 78-68 win over Missouri in Bud Walton Arena in Fayetteville. - Photo by Andy Shupe

FAYETTEVILLE -- Isaiah Joe was back on Saturday, and he brought the Arkansas Razorbacks with him.

Returning from a five-game absence recovering from arthroscopic surgery on his right knee, Joe scored 21 points to lead the University of Arkansas to a 78-68 victory over Missouri at Walton Arena before an announced sellout crowd of 19,200.

The Razorbacks (17-10, 5-9 SEC) had lost all five games Joe missed since his surgery on Feb. 4, including an 83-79 overtime loss at Missouri two weeks earlier.

"We're a whole different team with him," Arkansas Coach Eric Musselman said. "Look, we all know it's been a struggle without him for a variety of reasons.

[Video not showing up above? Click here to watch » https://www.youtube.com/watch?v=k2FlW-x_LJQ]

"We just can't afford a guy like Isaiah not to be in our lineup. I thought he was awesome."

"It was good being back," said Joe, a 6-5 sophomore guard from Fort Smith. "I think they were going to monitor my minutes, but once I got in the flow of the game I felt great out there."

"He's gifted," Missouri Coach Cuonzo Martin said. "Any time you've been out that long and can shoot the ball like that, it just shows the level of confidence. It's impressive.

[Video not showing up above? Click here to watch » https://www.youtube.com/watch?v=djR2ZYKsomE]

"He's an all-league guy. He's a guy when it's all said and done that will play for 15 years [professionally]. Not many guys can shoot the ball like that. He can stroke it."

Joe capped his scoring with an NBA-range three-pointer on a fast break that put Arkansas ahead 74-68 with 1:10 left.

"That last three he made ... some coaches might say, 'Eh,' " Martin said. "But that's confidence. That's a legit stroke -- probably the best in America."

"The first few minutes was just about getting back into the flow of the game," Joe said. "They did a really good job trying to face guard me and I wasn't to going to force anything. I was going to let it come to me."

The game started coming to Joe with 9:15 left in the first half when he drew an offensive foul by Javon Pinkett and hit two free throws.

That was the start of Joe scoring 10 points to fuel a 24-9 run by Arkansas to end the half and give the Razorbacks a 35-33 halftime lead.

"He did heat up at the perfect time for him and his teammates," Missouri Xavier Pinson said.

Arkansas led the entire second half and by as many as 10 points at 52-42. Four times Missouri pulled within two points in the final 9:30, but the Razorbacks kept answering.

"Those shots are huge, man," Joe said. "You've got to have an answer for other teams."

"They played well, they made shots and they were hungry for a victory and they got that," Martin said. "But they also have five guys that are capable of scoring in double figures, maybe six."

Brown, a freshman forward, led Missouri with a career-high 17 points and 10 rebounds. Pinson and Dru Smith, sophomore and junior guard, respectively, each added 15 points for the Tigers.

"How much are we going to lose the rebounding battle by every night? If it's 10, we're probably on pretty good shape," Musselman said. "So where do we get an advantage?"

The Razorbacks' advantage is on the perimeter -- especially with Joe back -- and being No. 1 nationally in three-point defense at 25.7% coming into the game.

"Other teams come into games and say, 'We're going to get separation against Arkansas by pounding them on the glass,' " Musselman said. "Our separation is we lead the entire country in defending the three ball.

"We're pretty good when we make three-ball shots, and then leading the country in a category is really, really hard. When you look at the analytics of our sport, the three ball is a difference-maker for a lot of people."

Arkansas held Missouri to 19.0% three-point shooting while also doing a better job of cutting off driving lanes and fouling less than in Missouri's victory earlier this season.

"They had a solid game plan defensively."

Arkansas and Missouri both hit 16 of 20 free throws Saturday. In the teams' first game Missouri hit 34 of 44 free throws and Arkansas 28 of 39.

"I thought we had really good goal-line defense, meaning we packed the paint as much as we could," Musselman said. We didn't want to give them seams to get to the basket."

Joe resumed practice Monday, and Musselman put him back in the starting lineup Saturday when he didn't experience swelling in his right knee.

"I was engaged in the game, engaged in timeouts and just waiting for my time to come back."

Joe is averaging 20.3 points in three games against Missouri -- including two matchups last season -- and has hit 20 of 36 shots.

"He's an incredible player, incredible shooter," Pinson said. "He showed us who he was -- and who he still is."

UP NEXT Arkansas plays Tennessee at 7:30 p.m. Wednesday at Walton Arena in Fayetteville.