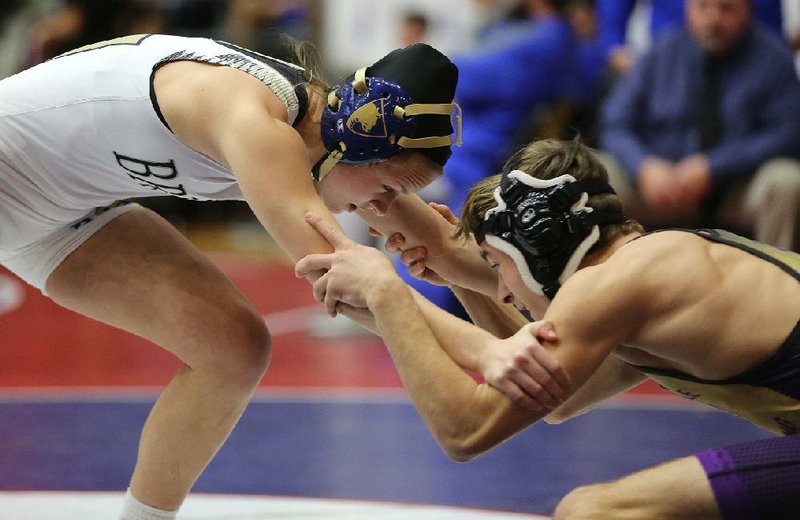 Riley Holman does not mind wrestling with the boys.

Even as the Arkansas Activities Association sanctioned girls wrestling for the 2019-20 season, Holman stuck with wrestling with boys in her senior season at Pulaski Academy.

The move paid off, as Holman, in her final wrestling match, won the Class 1A-4A 120-pound state championship Saturday in the 12th annual boys wrestling state tournament at the Jack Stephens Center in Little Rock.

Wrestling girls was never in Holman's mindset, she said.

"I just really like to challenge myself," said Holman, who plans to major in pre-dental at the University of Arkansas. "I just thought that coming out here and making a statement, by winning the boys bracket means a lot, instead of taking the easy road and wrestling the girls."

Holman became the second female to win a boys wrestling state title along with Destiny Nunez of Beebe in 2015 after earning a 12-9 decision over Berryville's Dominic Henry.

"It's crazy when you think about it," Holman said. "Having two girls win a boys state title in that short amount of time is pretty amazing. I'm glad I was one of those people."

Holman transferred to Pulaski Academy from Joe T. Robinson before the 2018-19 season, but was ineligible to compete for the Bruins last year.

At Robinson, Holman placed sixth as a freshman in 2017. She lost in the consolation round in 2018 in her sophomore season.

"It's super exciting," Holman said. "It's one of the best feelings in the world."

Fayetteville's Ian Branch was battling cancer less than two years ago, but he picked up his third medal in three years in the boys wrestling state tournament Saturday.

The junior took third place in 113-pound division in Class 6A, just three days after being officially released from care at Arkansas Children's Hospital in Little Rock and diagnosed as cancer free.

Branch was diagnosed with a cancerous tumor in his left thigh during his freshman year. He had the tumor removed, but doctors were forced to do a bone graft using a bone from a cadaver. It still affects him today.

"It hurts sometimes in the cold," said Branch, who was second a year ago at 106 pounds. "Some days I still have to use crutches."

Once a three-sport standout, he was forced to quit track and football. That's left only wrestling, and he's got an eye on a state title next season.

"Wrestling's my life, eat, sleep," Branch said. "Honestly, I shouldn't even be here. Without wrestling I didn't have motivation to get back."

Berryville sophomore Caleb Record bumped up a weight class this year but still got the same result.

He won the 113-pound state title in Class 4A this season after winning at 106 last season. Record pinned Maumelle Charter's Colin Hornaday in 36 seconds in the finals.

But it's all in the family as his older brother Colton matched him by claiming the 4A crown at 285.

Colton Record improved to 39-0 with a first-period pin of Valley View's Cole Littrell in the finals to give the Record family five total state titles since brother Garrett also won one at 285 in 2016.

Rogers Heritage's Charlie March hasn't spent as much time competing as he'd like over the past two seasons because of injuries.

But the senior still walked away with his second consecutive Class 6A state title at 195 pounds. He sailed into the finals with three first-period pins but had to hold off Fayetteville's Robbie Woody 11-8 in the finals.

March said he was shaky at the start of the finals. But he also acknowledged he was gassed late in the match.

"I don't know if it was nerves or what," March said. "I was just like, 'this is the last match I'm ever gonna wrestle. I'm just gonna do what I can.

"My conditioning's terrible because I haven't wrestled many matches and the ones I have wrestled haven't lasted long. But going out on top feels good."

March missed part of last season with a torn meniscus in his left knee not to mention a concussion and strep throat but still managed to claim a state title.

He suffered an injury to his other knee in the War Eagles' first tournament of the season in Jay, Okla., and he was sidelined for more than a month. But he returned to action three weeks ago and despite struggling with stamina finished the season with a 17-0 record.

Two pairs of brothers and sisters left the Jack Stephens Center this week with high finishes.

His sister Reyna Rogers won the Class 1A-4A third-place match in the 106-pound category by a 12-8 decision over Pulaski Academy's Grant Swindle.