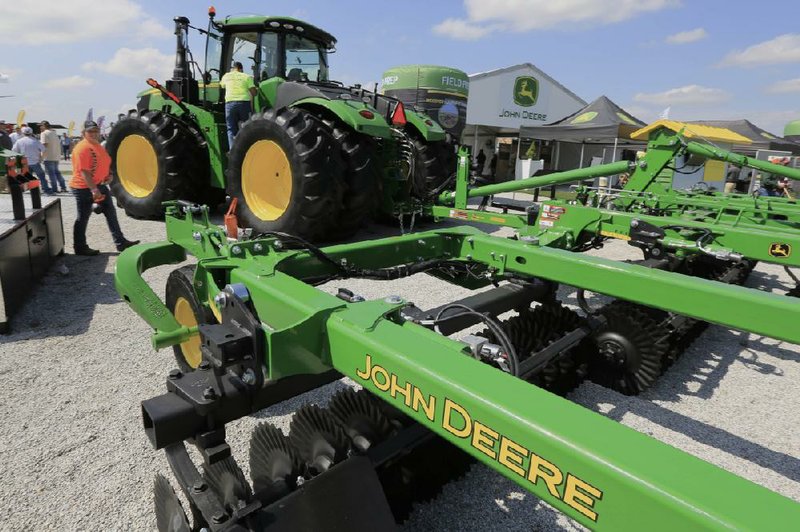 John Deere tractors are on display at a farm trade show last year in Grand Island, Neb. As the U.S. agriculture industry feels the effects of the trade war with China, more than half of U.S. farmers plan to spend less on capital equipment this year, according to a survey. (AP/Nati Harnik)

President Donald Trump raised the possibility of delivering more aid to American farmers as promised purchases from trade deals with China and other countries have yet to materialize.

Trump said he may expand the nearly $30 billion Department of Agriculture bailout program until the administration's recently struck trade deals with China, Canada, and Mexico "kick in."

In an all-caps tweet on Friday, Trump said that "If our formally targeted farmers need additional aid until such time as the trade deals with China, Mexico, Canada and others fully kick in, paid for out of the massive tariff money coming into the USA!"

Only a day earlier, Trump's agriculture secretary, Sonny Perdue, said that he doesn't anticipate another round of trade aid payments to farmers and that he expects China to ramp up purchases later this year as disruptions from the coronavirus outbreak subside.

"The president's tweet was a surprise to us," Ted McKinney, undersecretary of agriculture for trade, said at the USDA Agriculture Outlook Forum in Arlington, Va. "He will make that decision. And we will go with that decision."

Although Trump often says the U.S. is taking in money from the tariffs he's imposed, those costs are borne by American companies and consumers.

On Thursday, the Agriculture Department's chief economist, Robert Johansson, projected that agricultural exports to China would reach roughly $14 billion in the fiscal year that ends Sept. 30, far short of what White House officials said would take place based on the "phase one" trade deal with Chinese leaders. White House officials have said agricultural exports to China would be between $40 billion and $50 billion in each of the next two years.

The president's promise to extend the bailout program if necessary is a reversal from what Trump administration officials have been saying for months.

But since a partial trade deal signed with China last month, the coronavirus outbreak has severely hampered China's economy, with normal operations at numerous Chinese companies delayed by the spread of the disease. This has raised questions about whether Chinese officials planned to follow through on huge purchases of U.S. farm products when many of their businesses are operating at low capacity.

Speculation about another round of bailouts has been growing among U.S. farm groups, but the timing of the president's announcement was a surprise. Some farmers were skeptical of Perdue's recent promises that the bailout program would be ending, given the questions surrounding China's commitment to making the agricultural purchases.

"Farmers are no dummies. They've seen this get rolled out the past two years, programs invented out of whole cloth," said Robert Johnson, president of the National Farmers Union. "The president is going to do whatever he can to appease the farmers because it's an election year. The only surprise here is the timing."

The bailout was created by the Trump administration as a way to try to calm anger from farmers who complained they were caught in the middle of the White House's trade war with China. The Agriculture Department created an expansive new program without precedent that makes direct payments to farmers. Unlike many other government bailout programs, farmers are not required to pay any of the money back.

The U.S. has already pledged or spent $28 billion in bailout payments to American farmers, an amount that is twice the size of the bailout of the auto industry during President Barack Obama's tenure. Many Republicans assailed Obama's actions, but they have largely been supportive of Trump's assistance to farmers. In some cases, that assistance has gone to foreign-owned companies with plants operating in the U.S.

Farmers have been taking a cautious approach. More than half of U.S. farmers plan to spend less on capital equipment this year, and only 13% plan to spend more, according to a survey conducted by the American Farm Bureau Federation, the nation's largest general farm organization. Less than a quarter of farmers expect higher prices for their crops or livestock in the coming year, according to the survey, released this week.

Also Friday, China suspended more punitive tariffs on imports of U.S. industrial goods in response to a truce in its trade war with Washington that threatened global economic growth.

Goods affected by the latest reduction include industrial components and medical and factory equipment, according to China's Finance Ministry. It gave no details of the value of goods affected but said penalties were suspended for one year, effective Feb. 28.

China is still struggling with the mounting cost of measures imposed to contain the virus outbreak that has closed factories, stores and other businesses.

In an earlier tariff cut, China announced Feb. 6 that it would reduce duties on $75 billion of U.S. goods as part of the trade truce.

Information for this article was contributed by Jeff Stein and Laura Reiley of The Washington Post;by Stephen Steed of the Arkansas Democrat-Gazette; by Mario Parker and Mike Dorning of Bloomberg News; and by staff members of The Associated Press. 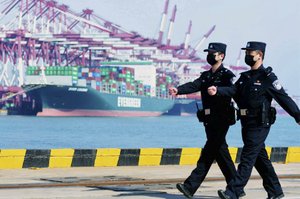 Police officers wearing face masks patrol at a container port in Qingdao, China, this week. Beijing on Friday suspended more tariffs on imports of U.S. industrial goods in response to a truce in its trade war with Washington. (AP/Chinatopix)