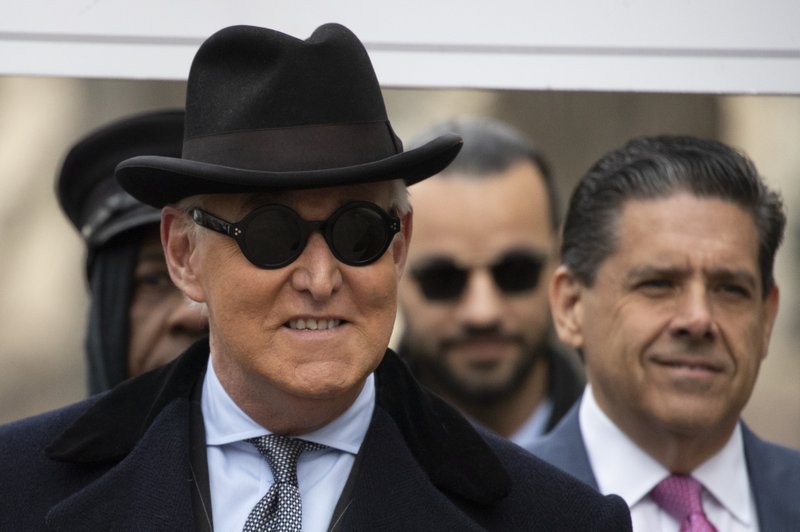 WASHINGTON -- Roger Stone was sentenced Thursday to more than three years in prison for obstructing a congressional inquiry in a bid to protect the president.

"This is not campaign hijinks. This was not Roger being Roger. You lied to Congress," Judge Amy Berman Jackson told Stone. "The dismay and disgust ... at the defendant's actions in our polarized climate should transcend [political] parties."

[Video not showing up above? Click here to watch » https://www.youtube.com/watch?v=QBU3RsqF2NI]

"I want the process to play out. I think that's the best thing to do because I would love to see Roger exonerated," he said.

Democratic House Intelligence Committee Chairman Adam Schiff of California tweeted after the sentencing that "to pardon Stone when his crimes were committed to protect Trump would be a breathtaking act of corruption."

But Sen. Lindsey Graham, R-S.C., signaled early support for such a move, tweeting that Trump has "all the legal authority in the world" to pardon Stone if he chooses.

Stone, 67, was convicted in November on all seven counts of an indictment that accused him of lying to Congress, tampering with a witness and obstructing the House investigation into whether the Trump campaign coordinated with Russia to tip the 2016 election.

He was the sixth Trump aide or adviser to be convicted on charges brought as part of former special counsel Robert Mueller's investigation into possible Russian interference in the 2016 election.

Stone, a longtime friend of Trump's, remained largely expressionless throughout Thursday's proceedings. As he left the Washington, D.C., courthouse and got into a black SUV without speaking to reporters, crowds of protesters engaged in dueling chants of "Pardon Roger Stone!" and "Lock him up!"

His attorney Bruce Rogow said Stone and his team would have no comment.

In a last-ditch effort to delay the sentencing, Stone's lawyers moved for a new trial on the basis of juror misconduct -- a claim that Trump highlighted in one of his tweets.

Gallery: Roger Stone sentenced to over three years in prison

Trump has repeated claims that the jury forewoman in Stone's case was "totally tainted" and an "anti-Trump activist," which he said should compel the judge to order a new trial.

The forewoman was a Democrat who once ran for Congress, which was disclosed at the time of jury selection, but Trump and other allies of Stone argue that she was biased. The Justice Department opposes a new trial in a position approved by Barr.

Jackson said she would review the motion and the government's response and would schedule a hearing if necessary. She refused to put off Stone's sentencing while those efforts were underway, but would delay execution of his sentence.

Jackson, in her sentencing, said Stone's efforts to thwart a legitimate congressional inquiry of national importance were "a threat to our most fundamental institutions, to the very foundation of our democracy."

Stone's lawyers were expected to appeal.

John Crabb, a prosecutor in the U.S. attorney's office in Washington, apologized during the sentencing hearing for "the confusion" over the government's sentencing position and stressed that the prosecutors who quit from the case were not to be blamed for it.

He said that department policy is to follow the sentencing guidelines in recommending punishment, and those prosecutors did so. He also said the department continued to believe that aggravating factors in the case had boosted the penalty recommended under the guidelines for Stone fivefold. "The Department of Justice and the United States attorney's office is committed to enforcing the law without fear, favor or political influence," he said.

He said Stone's offenses were serious and worthy of a "substantial period of incarceration" but left it up to the judge to decide the right punishment. He blamed the competing sentencing memorandums on "miscommunication" between Timothy Shea, the interim U.S. attorney, and his superiors at Justice Department headquarters.

Jackson questioned him about the process, asking him point-blank about the last-minute switch in the prosecution team. "Is there anything you would like to say about why you are standing there today?" she demanded.

Crabb deflected some of her questions, saying, "I apologize I cannot engage in discussions of internal deliberations."

Former and current government lawyers accused Barr of failing to protect the department from improper political influence from the White House. In an open letter, more than 2,000 former Justice Department employees have called for Barr to resign, claiming "interference in the fair administration of justice" by both the attorney general and the president.

In a television interview Feb. 13, Barr said he had decided to recommend a more lenient punishment for Stone based on the merits of the case. He also asked the president to stop publicly opining about the department's criminal cases, saying it was making his job "impossible."

In their initial sentencing memorandum, federal prosecutors said that Stone deserved a stiff sentence because he threatened a witness with bodily harm, deceived congressional investigators and carried out an extensive, deliberate, illegal scheme that included repeatedly lying under oath and forging documents.

Even after he was charged in a felony indictment, prosecutors said, Stone continued to try to manipulate the administration of justice by threatening Jackson in a social media post and violating her gag orders. Those and other factors justified a stiff sentence under advisory federal guidelines, they said.

The witness, a New York radio host named Randy Credico, ultimately invoked his Fifth Amendment rights rather than testify before the House Intelligence Committee, although he later was interviewed by the FBI and appeared before a federal grand jury.

In their second sentencing memo, prosecutors said, "Ultimately, the government defers to the court as to what specific sentence is appropriate under the facts and circumstances of this case."

Stone has known and advised Trump for years. Trump has attacked prosecutors, the jury forewoman and the federal judge overseeing the trial, casting his former campaign adviser as the victim of a vendetta by law enforcement.

"What happened to him is unbelievable," Trump said of Stone. "They say that he lied. But other people lied, too. Just to mention, Comey lied. McCabe lied. Lisa Page lied. Her lover, Strzok, Peter Strzok, lied. You don't know who these people are; just trust me, they all lied."

He went on to revive the email case involving Clinton, his 2016 Democratic opponent. "Hillary Clinton leaked more classified documents than any human being, I believe, in the history of the United States," he said. But, he added, "nothing happened to her."

Clinton was not accused of leaking classified documents. She was faulted for using a private computer server that was not as secure as a government server to send emails, some of which were later found to include classified information.

Comey, then the FBI director, faulted her for carelessness but said no prosecutor would charge a crime on those facts.

Information for this article was contributed by Sharon LaFraniere and Peter Baker of The New York Times; by Timothy Bella of The Washington Post; and by Ashraf Khalil, Mark Sherman, Michael Balsamo and Jill Colvin of The Associated Press. 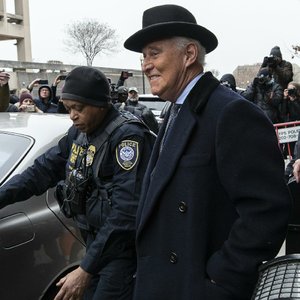 Roger Stone leaves federal court Thursday in Washington after his sentence was handed down. He was the sixth aide or adviser to President Donald Trump to be convicted on charges arising from former special counsel Robert Mueller’s investigation into possible Russian interference in the 2016 election. More photos at arkansasonline.com/221stone/. (AP/Alex Brandon)