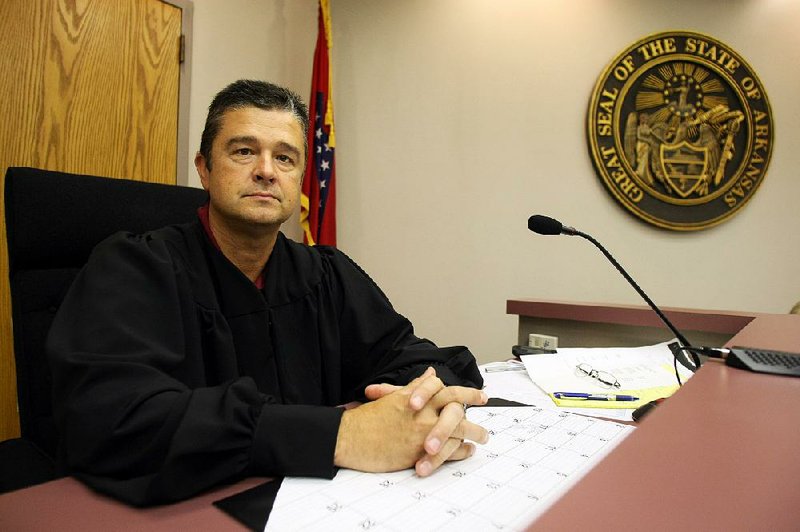 A former Saline County circuit judge who was removed from the bench after being accused of dodging state income tax filings will now also have to give up his law license for nine months, the Arkansas Supreme Court ruled on Thursday.

The former judge, Bobby McCallister, reached an agreement with the state's judicial watchdog in 2017 to step down after he was charged with failing to file state income tax returns over a period of several years. He was later placed on probation after pleading no contest to a single charge.

McCallister's final punishment comes via the recommendation of a special judge on the Supreme Court's Committee on Professional Conduct, which handles attorney discipline issues.

Retired Judge Ted Capeheart, on special assignment for the case, recommended early last year that McCallister's law license be suspended for nine months for misconduct under the judiciary's rules governing attorneys. In a 5-2 decision, the Supreme Court on Thursday upheld that punishment.

Writing for the majority, Justice Rhonda Wood noted that McCallister continued to miss filing tax returns even after he was elected to the bench in 2009.

"Judges must be held to a higher standard," she wrote, while taking into consideration mitigating factors, including favorable testimonies from several of McCallister's friends and colleagues in Saline County.

"A more severe sanction is not warranted either," Wood wrote. "McCallister has already received discipline related to his conduct occurring while he was judge. He received the ultimate judicial discipline by having to resign from office."

Chief Justice Dan Kemp and Justice Robin Wynne each wrote separately to say they would have handed down a lengthier suspension.

Kemp called McCallister's actions "egregious" and added the criticism that McCallister did not immediately take steps to correct his actions even after the issue first arose during the judge's divorce. Kemp said McCallister's law license should be suspended for five years.

Wynne was less harsh, writing in support of an 18-month suspension.

McCallister and his attorney, Jeff Rosenzweig, attempted to argue for a shorter suspension or reprimand, pointing to McCallister's character references as well as the fact that he does not owe money to the state. (County records show that a $23,000 federal tax lien was filed against McCallister by the Internal Revenue Service in 2018.)

"We understand the judgment of the Arkansas Supreme Court," Rosenzweig said in a text message Thursday. "After he serves his suspension, Mr. McCallister will return to being a member of the bar as well as continuing to be a distinguished member of the community."

McCallister is a partner at the Baxter Law Firm in Benton, according to the firm's website. McCallister could not be reached at the firm's offices Thursday afternoon.