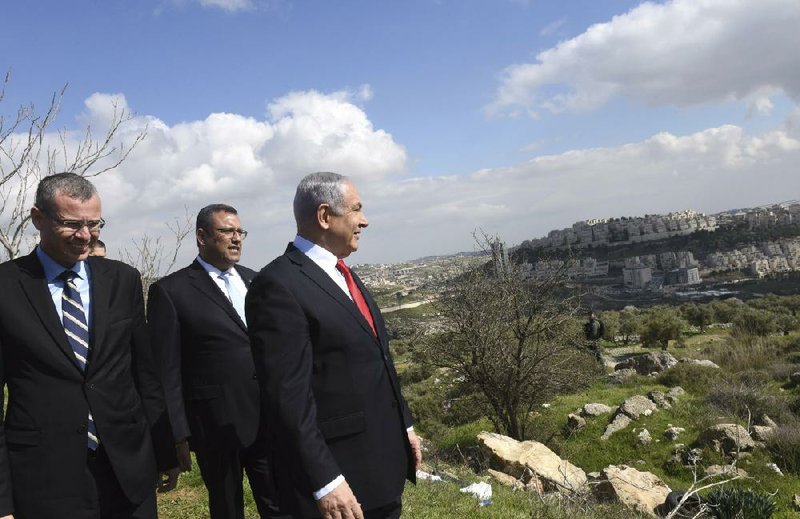 Israeli Prime Minister Benjamin Netanyahu (right) visits the Har Homa neighborhood east of Jerusalem on Thursday, one of two areas where he plans to build 5,000 new Jewish homes, a project a Palestinian official denounced as another attempt by Netanyahu “to destroy the two-state solution and any possibility of peace.” (AP/Debbie Hill)

JERUSALEM -- Israeli prosecutors on Thursday announced the opening of a criminal investigation into the failed startup of Prime Minister Benjamin Netanyahu's challenger, shaking up the final days of the election campaign.

The announcement did not say whether Benny Gantz is a suspect. But it came less than two weeks before the March 2 election and during a campaign in which Gantz's Blue and White party has painted itself as a clean and scandal-free alternative to Netanyahu, who is to go on trial for corruption next month.

Meanwhile, Netanyahu announced Thursday that he was pushing ahead with the construction of 5,000 new Jewish homes in key areas of east Jerusalem.

On a visit to the Har Homa neighborhood, Netanyahu pledged to build the homes there and in the Givat Hamatos neighborhood. Both lie on some of the last spaces of land linking the Palestinian areas of the West Bank to their hoped-for capital in east Jerusalem.

Netanyahu said he was pushing forward with 5,200 homes for Jews in the area, in addition to 1,000 new homes for Palestinians who live in Jerusalem's nearby Beit Safafa neighborhood.

Nabil Abu Rudeineh, a spokesman for President Mahmoud Abbas, denounced the move as another of Netanyahu's "attempts to destroy the two-state solution and any possibility of peace."

"This is a grave violation of the international law which says that settlements in all the Palestinian territories, including east Jerusalem, is illegal," he added.

In a statement regarding the Gantz criminal investigation, the Justice Ministry said that after examining documents and considering other evidence, "the acting state prosecutor has decided to move the subject of the suspicions surrounding the company 'Fifth Dimension' to a criminal investigation."

"The investigation will be conducted by Israeli police," it added.

After retiring from the army, Gantz headed Fifth Dimension, a cybersecurity company that entered talks with Israeli police over the sale of its product. According to Israel's state comptroller, a governmental watchdog, the police may have violated acquisition laws by granting the company a multimillion dollar contract without a public tender. Fifth Dimension later went bankrupt.

Gantz did not immediately comment. But earlier in the day, amid reports that a criminal probe was imminent, he denied any wrongdoing.

Netanyahu was charged last year with accepting bribes, breach of trust and fraud in three cases in which he is accused of receiving lavish gifts from billionaire friends and of exchanging regulatory favors with media moguls for more palatable coverage of him and his family.

Netanyahu denies wrongdoing and claims the charges have been trumped up by a hostile justice system, police and media that are out to get him. 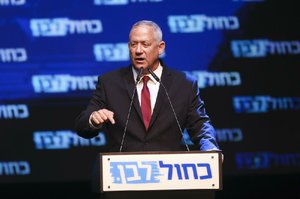