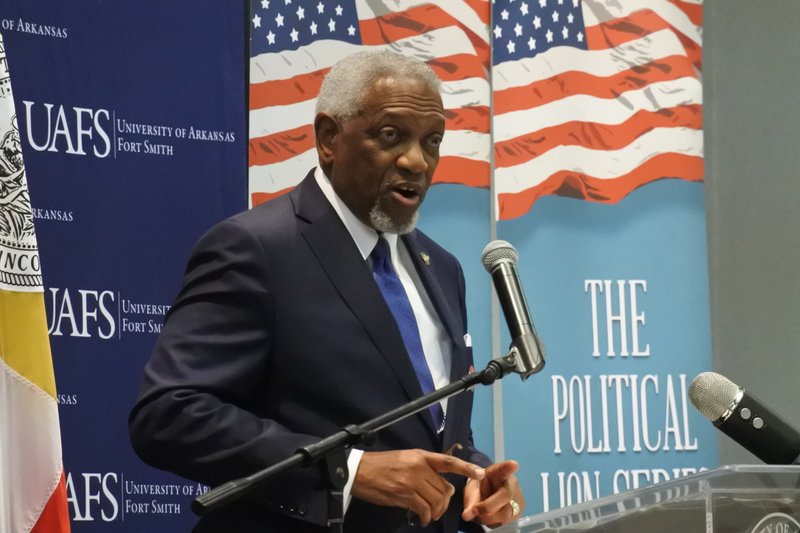 Fort Smith Mayor George McGill delivers his State of the City address Wednesday at the University of Arkansas at Fort Smith. (Arkansas Democrat-Gazette/Thomas Saccente)

FORT SMITH -- The mayor of Fort Smith gave both a celebratory and forward-thinking address to residents on Wednesday night.

Mayor George McGill -- in his 2020 State of the City address at the University of Arkansas at Fort Smith on Wednesday -- devoted considerable time to praising many different aspects and accomplishments of Fort Smith. This included the city's educational system, parks and recreation, government, the visual art displayed throughout the city, and the social services available in it.

Another notable feature of his address focused on matters, that he said, the city should be concerned with moving forward.

One issue McGill talked about is how the region will accommodate growth.

"Again, that's a complex issue that we should be thinking about: what are we going to do and how are we going to handle that, because pretty soon, manufacturers and producers out in the area will be asking about more water, sewer, and all of these things," McGill said. "So, we need to be poised to deliver."

McGill also brought up the city of Fort Smith's consent decree, which it signed in 2015 with the U.S. Environmental Protection Agency, the Department of Justice and the state of Arkansas agreeing to make an estimated $480 million in repairs and upgrades to the city's wastewater system over the course of 12 years to clear up chronic violations of the federal Clean Water Act.

"We've done everything we know to do to convince the EPA and the Justice Department to give us some relief on that, and we're going to continue to press, as best we can, that they do that," McGill said.