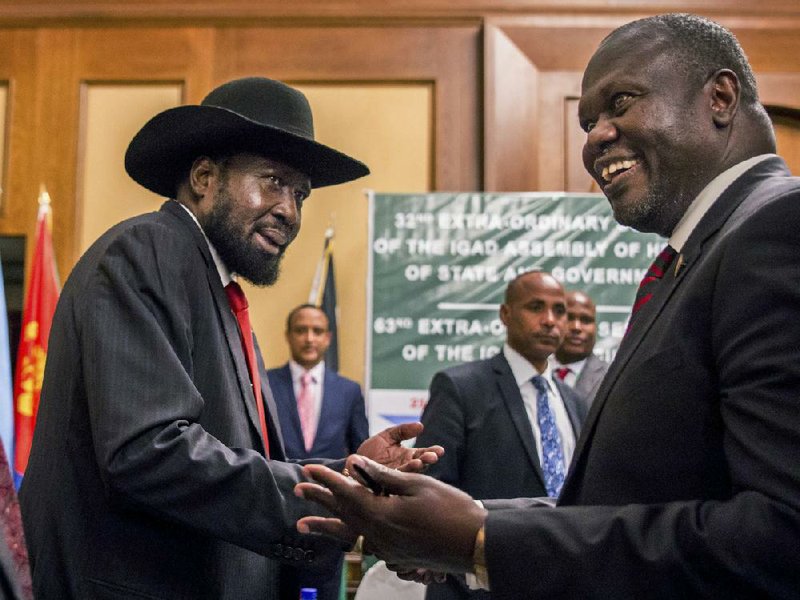 JUBA, South Sudan -- South Sudan's rival leaders Thursday announced they have agreed to form a coalition government just two days before the deadline, a breakthrough after months of delays and a major step in the emergence from a five-year civil war that killed nearly 400,000 people in the world's youngest nation.

The leaders had twice missed deadlines in the past year to form the transitional government that is expected to lead to elections in three years' time. Without that new government, many feared, South Sudan might slide into fighting again.

Opposition leader Riek Machar told reporters in the capital, Juba, that he and President Salva Kiir agreed that after the government's formation they will resolve any outstanding issues laid out in a September 2018 peace deal. Machar said he is confident they will address them all.

Kiir said the new government will be formed Saturday and he will appoint Machar as his first vice president, or top deputy, on Friday.

That arrangement has twice led to conflict -- once when the civil war erupted in late 2013 and again in mid-2016 after Machar returned to the post under a previous peace deal.

He ended up fleeing the country on foot.

The president said security arrangements, one crucial issue, will be resolved after the government's formation. He said the protection of Machar and others with the opposition will be under his responsibility.

"As for the other details that we have yet to agree upon, we will continue to iron and negotiate them out," Kiir said.

Another politically sensitive issue, the number of states, appears to have been resolved after Kiir over the weekend announced a "painful" compromise of 10 plus three administrative areas, down from 32.

The changes are for the sake of peace to prevail, Kiir said Thursday. And he called on the more than 2 million people who fled South Sudan during the conflict to finally come home.

South Sudan's civil war broke out just two years after the nation danced in the streets to celebrate a long-fought independence from Sudan. The conflict badly hurt the oil-rich nation's economy, and roughly half the country's 12 million people are hungry today.

The United States, which has applied sanctions and other pressure to get South Sudan's rival sides to make a lasting peace, welcomed Thursday's announcement.

Major challenges in the peace process remain, including the delicate process of integrating tens of thousands of former rival forces into a united army. That process has been marked by delays, the United Nations and others have said, noting that some of the forces appear to be poorly provisioned.

And widespread abuses such as the recruitment of child soldiers and sexual violence continue, a new report by the U.N. Commission on Human Rights on South Sudan said Thursday.

"The world has forgotten South Sudan," the International Rescue Committee's country director, Susan Purdin, said this week, adding that the South Sudanese people deserve to live free from fear. "With the formation of the unity government, faith in the country will be restored."

Information for this article was contributed by Cara Anna of The Associated Press.

Print Headline: Foes to rule together in South Sudan