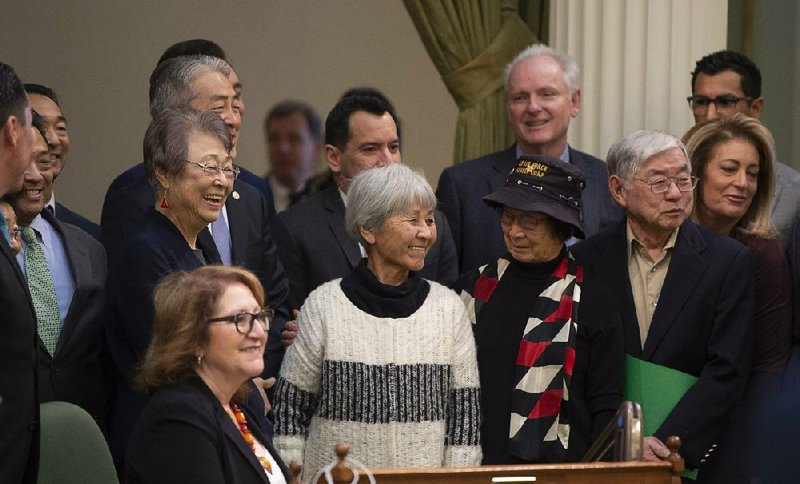 SACRAMENTO, Calif. -- The California Assembly apologized Thursday for discriminating against Japanese Americans and helping the U.S. government send them to internment camps during World War II.

The Assembly unanimously passed the resolution as several former internees and their families looked on. After the votes, lawmakers gathered at the entrance of the chamber to hug and shake hands with victims, including 96-year-old Kiyo Sato.

Sato said young people need to know about the 120,000 Japanese Americans who were sent to internment camps because the U.S. government feared some would side with Japan. The U.S. entered World War II after Japan bombed the Navy base at Pearl Harbor, Hawaii, on Dec. 7, 1941.

"We need to remind them that this can't happen again," Sato said.

The resolution came a day after Gov. Gavin Newsom declared Feb. 19 a Day of Remembrance. That's the date in 1942 when President Franklin D. Roosevelt signed an executive order that led to the imprisonment of Japanese Americans across 10 camps in the West and Arkansas.

The governors of Idaho and Arkansas also proclaimed it a Day of Remembrance, and events were held nationwide.

The California resolution said anti-Japanese sentiment began in California as early as 1913, when the state passed the Alien Land Law, targeting Japanese farmers who were perceived as a threat by some in the massive agricultural industry. Seven years later, the state barred anyone with Japanese ancestry from buying farmland.

"During the years leading up to World War II, California led the nation in fanning the flames of racism," said Assemblyman Al Muratsuchi, who was born in Japan and introduced the resolution.

A congressional commission in 1983 concluded that the detentions were a result of "racial prejudice, war hysteria and failure of political leadership." Five years later, the U.S. government formally apologized and paid $20,000 in reparations to each victim.

Several California lawmakers noted the state's direct role in discriminating against Japanese Americans and carrying out the federal government's order to send residents to internment camps. Two camps in the mid-1940s were in California: Manzanar on the eastern side of the Sierra Nevada and Tule Lake near the Oregon state line, the largest of all the camps.

California state senators will take up a version of the resolution later in the year and send it to the governor to sign. The resolution does not include any compensation.

During Thursday's state Senate session, Sen. Richard Pan, who is sponsoring the resolution in that chamber, introduced two sons of former California U.S. Rep. Norman Yoshio Mineta. He was the first Asian American to serve in a presidential cabinet, first under former President Bill Clinton and then under former President George W. Bush.

Mineta was imprisoned in a camp but went on to become "one of the most influential Asian Americans in the history of our nation," Pan said, noting Mineta led the congressional effort for the U.S. apology and reparations.

California has the largest population of people of Japanese descent of any state, numbering roughly 430,000.

Information for this article was contributed by Don Thompson of The Associated Press.