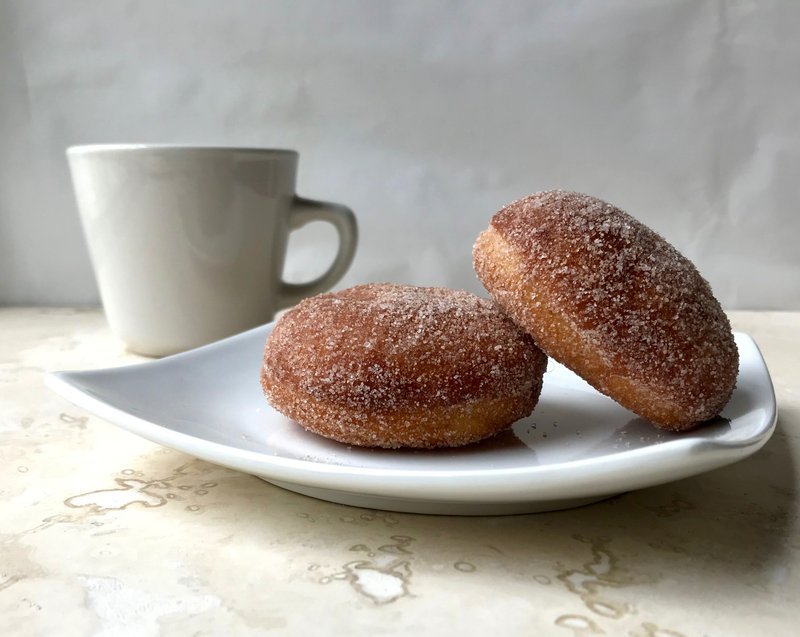 My first bite of a malasada was on a lanai with a mountain view on the island of Kauai.

The little doughnuts were part of a spread of local foods served during "orientation" at the resort where I was vacationing.

As I nibbled on the sugar-crusted fried dough I pondered the name — malasada didn't sound Hawaiian. As I turned the word over in my mind, vague bits of Spanish surfaced. I recalled "mal" means bad or evil and "asada" means roasted. But "evil roast" didn't make any sense for these delectable fried doughnuts.

After the presentation, I asked our host about the name.

It turned out malasadas were brought to Hawaii by Portuguese sugar plantation workers. And the name, sometimes spelled with a double s in Portuguese, means poorly cooked.

The Portuguese version is fairly straightforward with a simple coating of sugar.

But in Hawaii the doughnuts are available with plain sugar, cinnamon sugar, filled with haupia (coconut), ube (purple yam), jam and other fruit creams.

They're also commonly served during Mardi Gras, explaining why Fat Tuesday (this year Feb. 25) is known as Malasada Day, at least on the islands.

Line several baking sheets with parchment paper and then generously oil the paper; set aside.

In a small bowl, combine the yeast, 1 teaspoon of the sugar and the warm water. Let mixture stand until foamy, 5 to 10 minutes. If it does not foam, begin again with new yeast.

Meanwhile, in the bowl of a stand mixer fitted with the paddle attachment, beat eggs until fluffy. Add the yeast mixture, ½ cup of the sugar, the melted butter, the milk and salt; mix until combined. With the motor running, slowly add the flour a few tablespoons at a time; mix well. Knead 5 minutes. Transfer to a lightly greased bowl and cover loosely with plastic wrap; set in a warm place until doubled in size, about 1 ½ hours.

On a lightly floured surface, roll dough into a ½-inch thick square or rectangle. Using a sharp knife or biscuit cutter, cut dough into 2- to 3-inch squares or circles; gather and reuse scraps, if necessary.

Place cut dough on the prepared baking sheets, allowing space for the dough to rise. Cover loosely with plastic wrap and let rise in a warm place until doubled in size, about 1 hour.

Place remaining sugar and cinnamon (if using), in a large bowl; set aside.

Add enough oil to fill a Dutch oven or deep saucepan 2 inches deep. Heat oil to 350 degrees. (If you don't have a deep-fry thermometer, drop a couple of unpopped popcorn kernels in the oil. When the corn pops, it's ready.) Using scissors, cut the parchment paper around each piece of dough, leaving about 1 inch of paper on all sides. (Keeping the dough on the paper makes it easier to transfer into the hot oil.) Working in batches, place doughnuts in oil, paper side up, using tongs to peel off and discard paper. Cook, turning once, until puffed and golden, 2 to 3 minutes. Transfer to a wire rack set over several layers of paper towels to drain, then, while still warm, toss in sugar to coat.

Malasadas are best eaten the day they are made.

Makes 1 to 2 dozen doughnuts, depending on size.