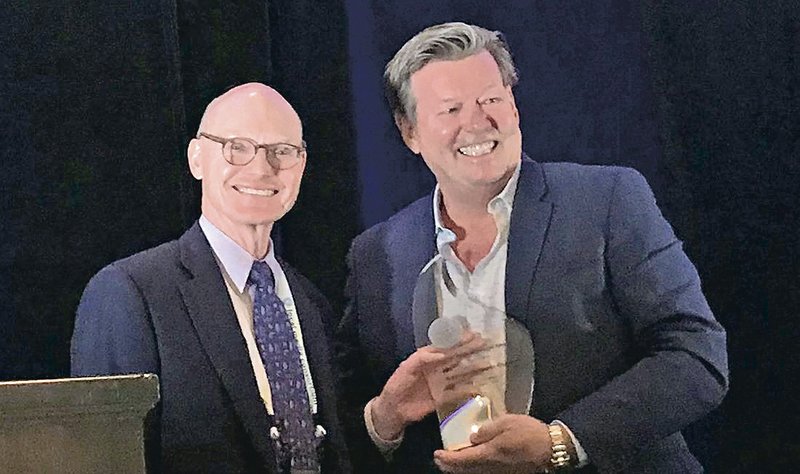 Arkansas Democrat Gazette publisher Walter E. Hussman Jr. (left) accepts the Mega-Innovation Award from Dave Kennedy, the chief revenue officer for the Honolulu Star-Advertiser. The Democrat-Gazette was honored for its iPad initiative at the Key Executives Mega-Conference in Fort Worth on Tuesday. (Arkansas Democrat-Gazette/Barry Arthur)

Newspaper publishers honored the Arkansas Democrat-Gazette on Tuesday for its iPad initiative.

The Mega-Innovation Award was presented to Democrat-Gazette publisher Walter E. Hussman Jr. at the Key Executives Mega-Conference in Fort Worth.

Billed as the "major newspaper industry conference of the year," the event is "a joint effort of newspaper media associations with an estimated combined membership of more than 5,000 publishers," according to http://mega-conference.com.

"We are honored to win this award from America's Newspapers," Hussman said. "The other two finalists were both impressive, with all three having the same goal: searching for the key to sustain local journalism."

The three finalists were announced on Jan. 27. The other two finalists were The Salt Lake Tribune, which converted last year to nonprofit status, and The Sumter Item of South Carolina, which added a "full-scaled sponsored video department," created community events, and rebuilt its print and digital products.

"Faced in 2018 with his newspaper's first unprofitable year in two decades, Arkansas Democrat-Gazette Publisher Walter E. Hussman Jr. knew he had to do something bold if he was going to keep alive the 200-year-old legacy of Arkansas' statewide newspaper," according to the Jan. 27 announcement.

"One logical option was to cut back on unprofitable circulation in remote areas of the state, something most newspapers had done years earlier," Hussman wrote in a May 2019 letter to subscribers. "But realizing that newspapers are not just a business, but a public trust vital to our democracy, we tried to determine some way we could continue to be a statewide newspaper delivered to all 75 counties."

"That 'some way' became what is known now as the 'iPad initiative,'" according to the announcement.

The Democrat-Gazette is converting circulation in all 75 counties from print to digital (plus a Sunday print edition). The newspaper is providing subscribers with Apple iPads, if they need such devices, so they can read a "digital replica" of the newspaper online. The replica edition can also be read on computers.

Weekday papers will continue to be printed and distributed to some locations in Central Arkansas for single-copy sales.

"The Mega-Innovation Award is always a highlight of the conference," Dean Ridings, America's Newspapers chief executive officer, told Editor & Publisher last month. "Innovation is critical to any industry, and we are honored to recognize the best of the best each year at this conference."