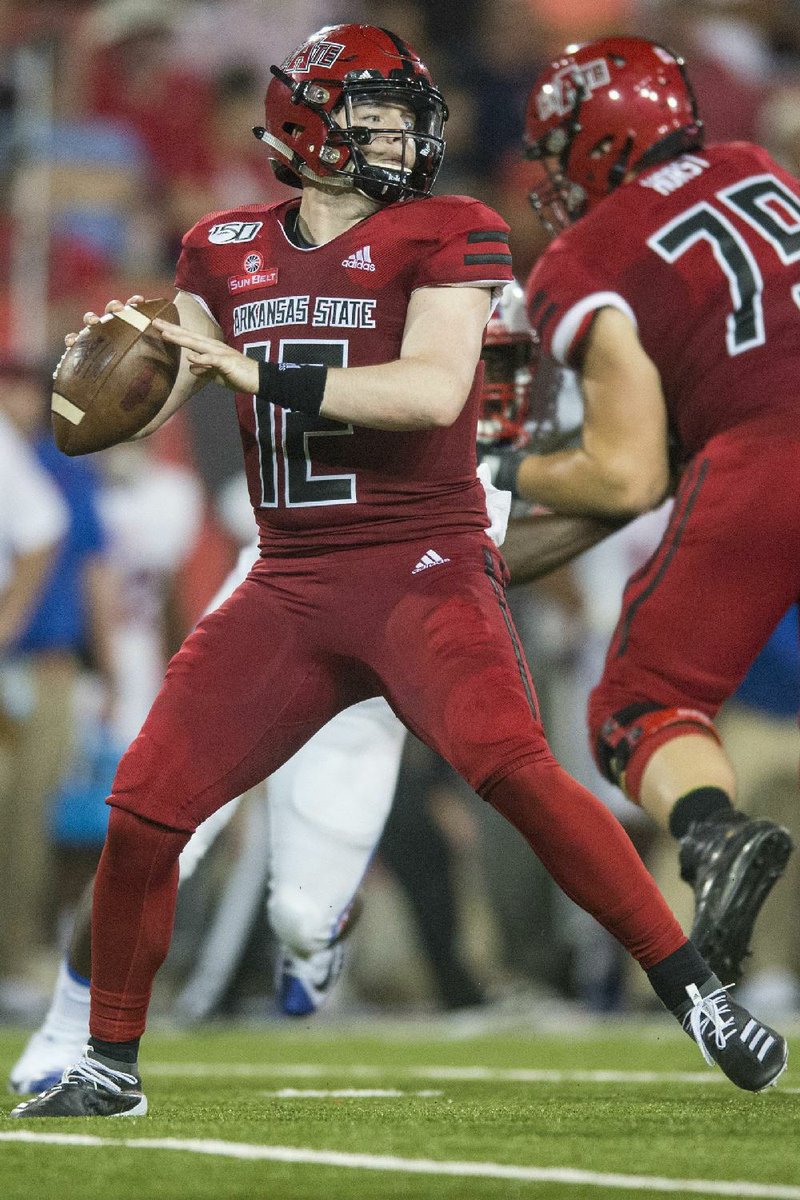 JONESBORO -- Arkansas State University Coach Blake Anderson made it clear the starting quarterback job was Logan Bonner's to lose at the beginning of fall camp in August.

Much has transpired over the ensuing months. A season-ending injury to the thumb on Bonner's throwing hand sidelined him for the final nine games of 2019. Former Pulaski Academy star Layne Hatcher stepped in as a redshirt freshman and led ASU to a 6-3 record and Camellia Bowl victory while becoming the Sun Belt freshman of the year.

As the Red Wolves opened spring practice Monday in Jonesboro, Bonner was fully healthy and throwing the ball with the same zip he had in the first four games of 2019, when he put up 1,052 passing yards, 10 touchdowns, 1 interception and a 59.5% completion rate.

Bonner received reps with the first-team offense, but so did Hatcher. It'll likely be that way for the duration of spring camp.

When speaking to reporters after practice, Anderson stuck to the same message he had back in August about who has the upper hand.

"Nothing's changed," Anderson said. "The guy [Bonner] was playing probably as good as anybody in the country when he went down. As good as Layne came in and played in his absence and did everything we asked him to do -- and we don't win eight games without him -- Logan's still the starting quarterback till somebody beats him out.

Hatcher, although slightly smaller than Bonner and not equipped with the same arm strength, did plenty over the last nine games to show he's a starter who can win. He finished the season with 2,946 passing yards, 27 touchdowns, 10 interceptions and 65.8% completions.

Anderson said Hatcher has a chance to win the job.

"I think time will tell if there's a gap between those two or if it's closer than it was a year ago," Anderson said. "I mean, a year ago it wasn't close. When Logan was playing, he was clearly one of the best, I thought, in the country and definitely the best in our league and by far the best on our team.

"Layne's had a lot of experience and hopefully he's closed that gap and is gonna make it really competitive because competition makes everybody better."

ASU's defense, which struggled last season to stay healthy and stop opposing offenses, will be under the microscope this spring.

The Red Wolves finished 2019 ninth in the Sun Belt in total defense (478.3 yards per game) and seventh in scoring defense (34.2 points per game).

Interior defensive linemen dropped like flies with injuries, including star tackle Forrest Merrill, who missed the last eight games with a torn bicep. ASU was forced to switch from a four-man front to a three-man front midseason.

Anderson said ASU will stick with the three-man front as its base defense.

"I do feel like we see there's a lot more versatility out of it than we originally were able to get into," Anderson said. "If we didn't have nine, 10 new players that we're plugging in, it'd be a little easier. I think we're excited about just how versatile and how dynamic you can be out of it. You can show a lot of different looks."

The Red Wolves were in need of a new punter after the departure of Cody Grace.

They appear to have found their answer in Ryan Hanson, a Taylor, Texas, native who spent the 2019 season at the University of Houston but is now practicing with ASU and immediately eligible for 2020.

"He's got some big shoes to fill because the punter we had was maybe the best in the country," Anderson said. "What we've seen out of him so far has been good. He obviously can do the job, [but] can he do it under pressure?

"You never worried at all about what Cody was gonna be able to do. I mean, he had like two bad punts his entire career here."

A number of key Red Wolves will be sidelined during spring camp due to injury.

Junior Ryan Graham, who was ASU's second-string running back before he went down in Week 4 with a torn ACL, also has a chance to return in a limited role.