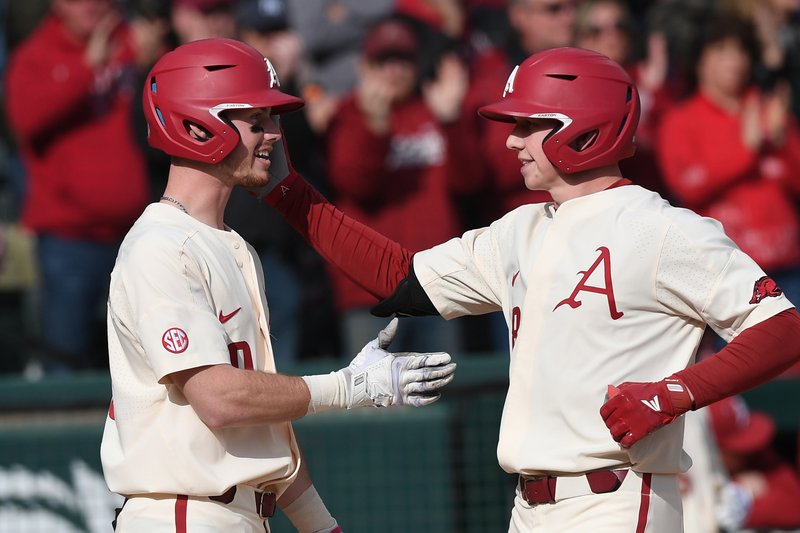 Heston Kjerstad celebrates with teammate Matt Goodheart (10) after one of Kjerstad's home runs during the Razorbacks 12-3 victory over Eastern Illinois on Sunday, February 16, 2020 at Baum-Walker Stadium. - Photo by J.T. Wampler

Kjerstad batted .583 (7 for 12) with 4 home runs and 10 RBI to power the No. 5 Razorbacks' three-game sweep of Eastern Illinois at Baum-Walker Stadium to open the season.

[Video not showing up above? Click here to watch » https://www.youtube.com/watch?v=aYsd4xR0m9U]

"He hit two balls against the wind today that got out of the park. It really wasn't a hitter's weekend wind-wise as far as the way the park played. Most balls were getting knocked down, but he's just a good hitter."

Kjerstad, a preseason All-American, hit a three-run home run in the second inning on an 0-1 slider from Eastern Illinois starter Foster Anshutz that was part of a five-run inning to put Arkansas ahead 7-1. He had another home run in the sixth on a first-pitch fastball from Blake Malatestinic, then added a two-run double in the seventh on another first-pitch fastball from Ben Stephens.

"I was just looking for a good pitch that I could hit hard," Kjerstad said.

Eastern Illinois Coach Jason Anderson -- an All-American pitcher at Illinois who played in Major League Baseball with the Yankees, Mets and Indians between 2003 and 2005 -- was impressed by Kjerstad.

[Video not showing up above? Click here to watch » https://www.youtube.com/watch?v=6RpCTRDyX2M]

"He's pretty good and he's locked in early," Anderson said. "The pitching he sees on a consistent basis [in the SEC] sets him up pretty well for a weekend against us.

"He reminds me of Paul DeJong of the Cardinals when he was in college at Illinois State."

"He obviously has a bright future ahead of him," Anderson said of Kjerstad. "We would have loved to have pitched around him, but they didn't give us a chance to do it. It's kind of hard when that lineup is so good."

[Video not showing up above? Click here to watch » https://www.youtube.com/watch?v=bqcM3kmndFU]

The left-handed hitting Kjerstad pulled both of his home runs Sunday over the right-field fence.

"I was actually thinking that if I got a ball, it may get hung up in the wind," Kjerstad said. "So I just went up to the plate hunting a good pitch to hit hard and luckily got enough of it to get two of them out."

Blake Adams, a freshman from Springdale Har-Ber, started for Arkansas and went three innings. He allowed 2 runs, 6 hits and 1 walk with 2 strikeouts. His last pitch resulted in a double play grounder from Ryan Knerschield turned by shortstop Casey Martin and second baseman Robert Moore that ended the top of the third inning and left two runners on base.

"I thought he came out and did a nice job," Van Horn said of Adams' college debut. "When he got into the bind in the third inning, there's one out, a full count, a guy's fouled off a couple pitches and he threw a breaking ball and got a double play ball. That was a big pitch, a big play for him.

"At the high school level, a lot of times that ball goes into left field or they might get one out of it. He was pretty excited that we turned a double play right there. Those pitchers love that defense behind them."

Kole Ramage threw two scoreless innings for the Razorbacks to pick up the victory. After Caden Monke allowed a run in two innings and Jacob Burton survived two walks by getting two strikeouts in the eighth inning, Elijah Trest retired Eastern Illinois in the ninth on eight pitches.

"Trest there in the ninth inning, that was some really good stuff," Van Horn said. "Everything knee high and in the mid-90s."

Arkansas leadoff hitter Braydon Webb was 2 for 6 and scored 3 runs, and No. 2 hitter Christian Franklin was 3 for 5 with 2 runs scored.

"They got on base and let the middle of the order drive them in," Van Horn said. "That's a good recipe for scoring runs."

Kjerstad drove in Webb and Franklin with his double in the seventh inning that hit at the base of the deepest part of center field -- 400 feet from home plate.

"He's definitely a player we want on our side against the competition," Webb said. "He's a hard worker and he earns everything he gets."

Arkansas catcher Casey Opitz said he's running out of things to say about Kjerstad, a three-year starter who in 137 games for the Razorbacks has a career .335 batting average, 35 home runs and 119 RBI.

"He's been doing the same thing for three years," said Opitz, who had a two-run double and drew two walks. "So he's just going to keep doing it this year.

"It's fun to watch. It's fun to have him on our team and just looking forward to a long season with him."

Van Horn said Kjerstad is a more patient hitter and not pressing.

"All the at-bats are adding up," Van Horn said. "He's really developing as a hitter. He's learning and he's going to be a tough out this year."