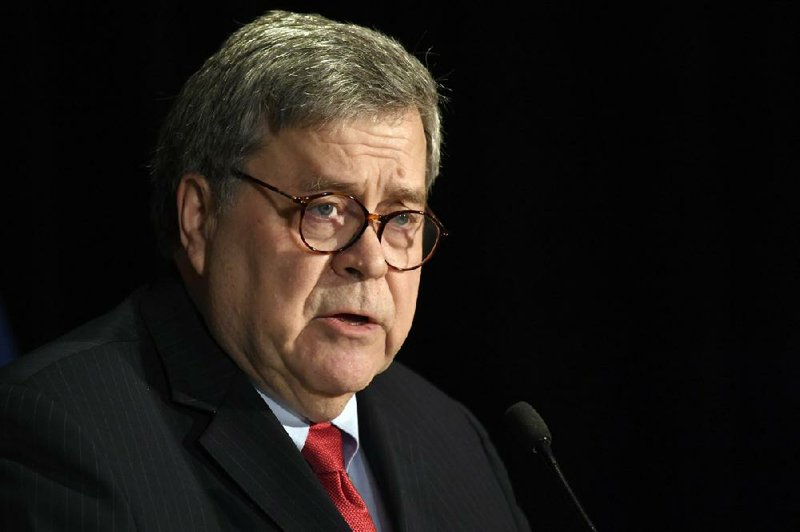 They also urged current government employees to report any signs of unethical behavior at the Justice Department to the agency's inspector general and to Congress.

"Each of us strongly condemns President Trump's and Attorney General Barr's interference in the fair administration of justice," the former Justice Department lawyers, who came from across the political spectrum, wrote in an open letter Sunday. Those actions, they said, "require Mr. Barr to resign."

The sharp denunciation of Barr underlined the extent of the fallout over the case of Stone, capping a week that strained the attorney general's relationship with his rank and file, and with the president himself.

After prosecutors on Monday recommended a prison sentence of up to nine years for Stone, who was convicted of obstructing a congressional inquiry, Trump lashed out at federal law enforcement. Senior officials at the department, including Barr, overrode the recommendation the next day with a more lenient one, immediately prompting accusations of political interference, and the four lawyers on the Stone case abruptly withdrew in protest.

The Justice Department said the case had not been discussed with anyone at the White House, but that Trump congratulated Barr on his decision did little to dispel the perception of political influence. And as the president widened his attacks on law enforcement, Barr publicly reproached the president, saying that Trump's statements undermined him as well the department.

"I cannot do my job here at the department with a constant background commentary that undercuts me," Barr said during a televised interview Thursday with ABC News.

In the days after the interview, Trump has been relatively muted. He said on Twitter that he had not asked Barr to "do anything in a criminal case." As president, he added, he had "the legal right to do so" but had "so far chosen not to!"

But lawyers across the Justice Department continue to worry about political interference from the president despite public push-back by Barr, long considered a close ally of Trump's.

In May, Protect Democracy gathered signatures for a letter that said the Mueller report presented enough evidence to charge Trump with obstruction of justice were that an option. At the close of his investigation, special counsel Robert Mueller declined to indicate whether Trump illegally obstructed justice, citing a decadesold department opinion that a sitting president cannot be charged with a crime. That letter was also critical of Barr.

Even as the lawyers condemned Barr on Sunday, they said they welcomed his rebuke of Trump and his assertions that law enforcement must be independent of politics.

"Mr. Barr's actions in doing the President's personal bidding unfortunately speak louder than his words," the Justice Department alumni wrote in the letter posted online. "Those actions, and the damage they have done to the Department of Justice's reputation for integrity and the rule of law, require Mr. Barr to resign."

The letter comes days after some Democratic senators pressed for Barr to resign, and after the New York City Bar Association said that it had formally reported the attorney general's behavior to the Justice Department's inspector general.

The letter acknowledges there is little chance the signatories' criticism will lead to Barr's departure, adding, "because we have little expectation he will do so, it falls to the Department's career officials to take appropriate action to uphold their oaths of office and defend nonpartisan, apolitical justice."

The letter calls on every Justice Department employee to follow the "heroic" example of the four prosecutors who quit the Stone case "and be prepared to report future abuses to the Inspector General, the Office of Professional Responsibility, and Congress; to refuse to carry out directives that are inconsistent with their oaths of office; to withdraw from cases that involve such directives or other misconduct; and, if necessary, to resign and report publicly -- in a manner consistent with professional ethics -- to the American people the reasons for their resignation."

Prosecutors who currently work at the department should withdraw from cases that involve abuses or political interference, the lawyers said.

The letter calls for similar vigilance in other government agencies, adding, "The rule of law and the survival of our Republic demand nothing less."

Information for this article was contributed by Katie Benner of The New York Times and Devlin Barrett of The Washington Post.