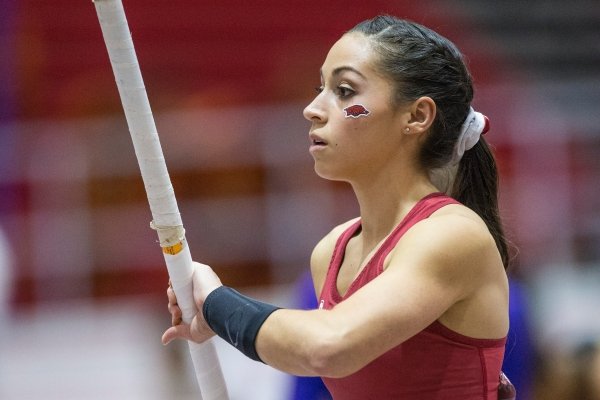 Lauren Martinez of Arkansas competes Friday, Jan. 31, 2020, in the women's pole vault during the Razorback Invitational track meet at the Tyson Track Complex in Fayetteville. Go to nwaonline.com/photos to see more photos. - Photo by Ben Goff

FAYETTEVILLE -- University of Arkansas senior Lauren Martinez, a transfer from California, cleared a personal-best 14 feet, 4 1/2 inches to win the pole vault Saturday at the Tyson Invitational for the No. 2-ranked Razorbacks.

Martinez, a Pacific-12 Conference champion in 2018, had a previous best of 14-0 3/4 earlier this season. Her mark on Saturday at the Randal Tyson Center is the sixth best on Arkansas' top 10 list.

"I've been waiting to P.R. [personal record] for a year now," Martinez said in a UA news release. "It was a great feeling and I was very excited. When it came down to just Bailee and I, it was nice having a teammate there as we both attempted a P.R. I've been working on some technical stuff and I think today it finally clicked a little bit."

Arkansas' distance runners competed at the Husky Classic in Seattle, where on Friday senior Katie Izzo ran a personal-best 8:55.67 to take fourth in the 3,000, and senior Carina Viljoen ran 8:56.63 for sixth.

Izzo's performance ranks second on the Arkansas all-time indoor list, trailing only the record 8:52.57 set by Dominique Scott in 2015. Viljoen's effort ranks No. 4 on the Razorback all-time list.

Arkansas senior Abby Gray ran a personal-best 16:15.72 in the 5,000 to finish fifth among collegians and 15th overall.

"Obviously, the opportunity to divide the forces and let our sprint and jump crew do a great job at the Tyson Invitational and then our distance crew to run some all-time best time and national marks worked well," UA women's track and field coach Lance Harter said in a news release. "It further prepares us to be competitive at the SEC Championships, and ultimately at the national meet."

Arkansas senior Laquan Nairn went 52-10 1/4 on his final triple jump attempt to win the Tyson Invitational title. The jump moved him from third to first.

"It shows how positive our thoughts can be going into a situation where I was sitting in third place for most of the competition," Nairn said in a news release. "It shows how hard we're training and how everything is coming together."

Arkansas junior Emmanuel Cheboson, a transfer from Louisville, took sixth in the 5,000 at the Husky Classic in 13:41.90 for the No. 20-ranked Razorbacks. He's now No. 6 on the Arkansas all-time list.