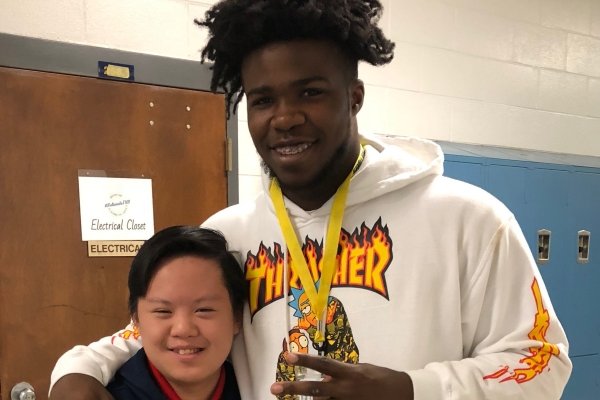 University of Arkansas defensive line signee Andy Boykin's personality and heart are as big as his 6-3, 301-pound frame.

Boykin, who led the Troup County Tigers in LaGrange, Ga., to the playoffs last season, brightens the hallways of the school.

"Andy is such a sweet kid, he comes down the hall with a great big smile on his face," teacher's assistant Brittany Cranes said.

His infectious smile and soft heart have endeared him to many in the school, including special-needs students.

"They'll see him walking this way, and they'll just run to him," Cranes said. "He always makes time to stop and talk to every child that comes up and gives them a hug."

Special education teacher Caitlyn Snyder appreciates how he interacts with her students.

"He's always just so genuine with my students," she said. "It doesn't matter who he's with, who's around him."

Coach Tanner Glisson said Boykin's helmet is half way covered with Tiger decals, not because of what he does on the field but for good deeds off of it.

"You cannot get a helmet sticker for anything you do on the field. All those things represent what was uncommon outside of playing the game of football," Glisson said.

Glisson gets a weekly report from teachers detailing uncommon deeds by his players, and Boykin is a regular on the report.

"We recognize that in front of our players, so when you see his helmet and [Boykin] has all these stickers, people think, 'Well, he must of had two sacks,' " Glisson said. "No, it was the things he's done off the field, and I think that's really cool."

"Some kids don't even take time to look at my kids that have disabilities, but Andy doesn't see that," Snyder said. "He just sees them like a friend. He reminds us not to take the little things for granted."

One particular special-needs student has taken a shine to Boykin. Dan, a sophomore, always brightens up when he sees Boykin. Recently Boykin was walking through the school gymnasium, and Dan spotted him and wanted to shoot hoops.

"He stopped and played basketball with Dan for a good 30 minutes, and at the end I got so tickled because I looked and they're sitting down on the floor just having a full-blown conversation," Cranes said. "I don't know what they were talking about, but Andy was just as excited as Dan was.

"They were sitting in the middle of the gym floor just talking. It was like there wasn't nothing else in the world, but just those two guys. You know how some kids do things just to be seen, it's not that way with Andy. He comes and spends time with Dan. He's there to spend time with his little buddy."

Snyder said Dan is a lover of sports.

"That's why he and Andy have a special connection because Dan sees this 6-3 football player and thinks he's the coolest thing on this planet," Snyder said

Regardless of his schedule, Boykin always makes time for Dan and the other special-needs students.

"You can tell sometimes he probably should be going to class or if he's running behind, but if he sees Dan he's right there with him," Cranes said. "He comes and hugs him, and Dan will take him around, 'This is my brother, this is my brother.' It's so funny because Dan is probably a good 5 feet. If he's that tall."

"What I see when he interacts with the kids, he just feels at home," Glisson said. "It's not like he's a superstar football player. I think he identifies with some of the struggles that he went through. I think he kind of identifies with them. He understands that life is tough, so he's very sympathetic to some of that."

Cranes, Snyder and their special-needs students run a school store that sells snacks and school supplies to teachers and students in an effort to teach job skills. Snyder's favorite memory of Boykin comes from last year.

"We have a cart, and we go around to the teachers and sell snacks to them on Friday. Andy was in the hallway, and he took Dan by the hand and walked hand-to-hand down the hallway to introduce him to more football players," Snyder said.

Glisson has a simple explanation about why Boykin is so kind to others.

"He just really has a heart of gold," he said.