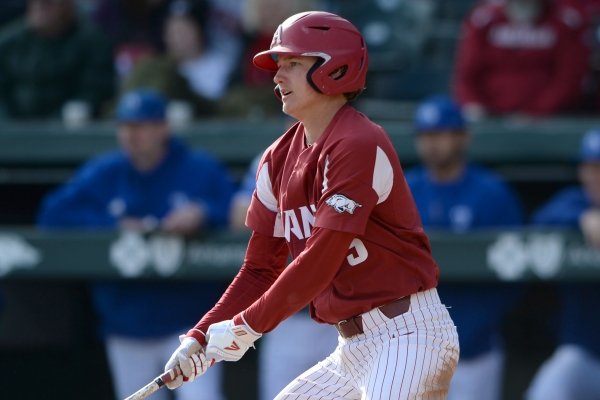 FAYETTEVILLE -- Jacob Nesbit's hot hitting earned him a move into the sixth spot in the University of Arkansas batting order Saturday.

That was the perfect spot for the sophomore, who came up twice with two outs after Eastern Illinois opted to give Casey Martin intentional walks.

Nesbit made the Panthers pay with run-scoring singles in the third and fourth innings as the No. 5 Razorbacks unleashed a 10-1 rout before an announced crowd of 7,681 at Baum-Walker Stadium.

Arkansas (2-0) will go for the season-opening sweep today at 1 p.m., with freshman right-hander Blake Adams starting for the Razorbacks against lefty Foster Anshutz.

The Razorbacks jumped to a 3-0 lead in the first inning off Trevor Nicholson (0-1) on wind-blown home runs by leadoff man Braydon Webb and Matt Goodheart as part of their 12-hit attack. Nesbit's run-scoring hits came as Arkansas blew the game open with a run in the third followed by a six-run fourth.

Nesbit went 3 for 5 to take his two-game average to .500. His single off the lefty Nicholson brought home Christian Franklin in the third inning, and his single against Alex Spahman in the fourth inning scored Heston Kjerstad.

"Putting barrel to the ball always feels really good, especially when they walk the guy in front of you," Nesbit said. "Just trying to hit something hard and hopefully it falls where they're not, and luckily it did."

Arkansas Coach Dave Van Horn said Nesbit's scrimmage work earned him a move up from the eight hole, where he batted in the opener.

"He's really done a nice job against left-handed pitching," Van Horn said. "We've noticed it in our scrimmages that he seems to hit them good. He takes good swings.

"So I just through I'd move him up there. They pitched around some guys a couple of times, and he made them pay. That was good to see."

The Razorbacks' 10 runs through four innings made things easier for left-hander Patrick Wicklander (1-0), who was not particularly sharp -- throwing 77 pitches in his 5 innings -- but did not allow a run on 3 hits and 3 walks.

"Overall, I felt really good about it," Wicklander said. "I just wanted to pick up right where Connor [Noland] left off [Friday], basically."

The Razorbacks' co-aces Noland and Wicklander both picked up wins, though the southpaw got double the run support on a breezy day with temperatures in the 50s.

The weird winds contributed to the scoring on Arkansas' first at-bat. Webb launched a ball deep down the right-field line on a 1-1 pitch that pinged high off the foul pole for his first home run and the Razorbacks' fourth of the season.

"When it left the bat, we thought it was going to be foul, but it just stayed straight, like the wind pushed it just enough to keep it straight and it hit the foul pole," Van Horn said. "He wasn't even running. He was kind of looking at it and jogging, and the next thing you know the ball hit the foul pole."

Goodheart's two-run shot, after Kjerstad drew a one-out walk in the first inning, had an even stranger trajectory. It looked foul off the bat but landed in the Eastern Illinois bullpen about 20 feet from the pole.

"It was an inside fastball," Goodheart said. "I turned on it, and I thought it was going to be foul as well. The wind pushed it back, and I'm grateful."

The Razorbacks got a strong relief outing from sophomore right-hander Caleb Bolden, who allowed three hits in three scoreless innings.

Webb had two hits, and seven other Razorbacks had one hit, including Goodheart, who drove in a game-high three runs from the cleanup spot.