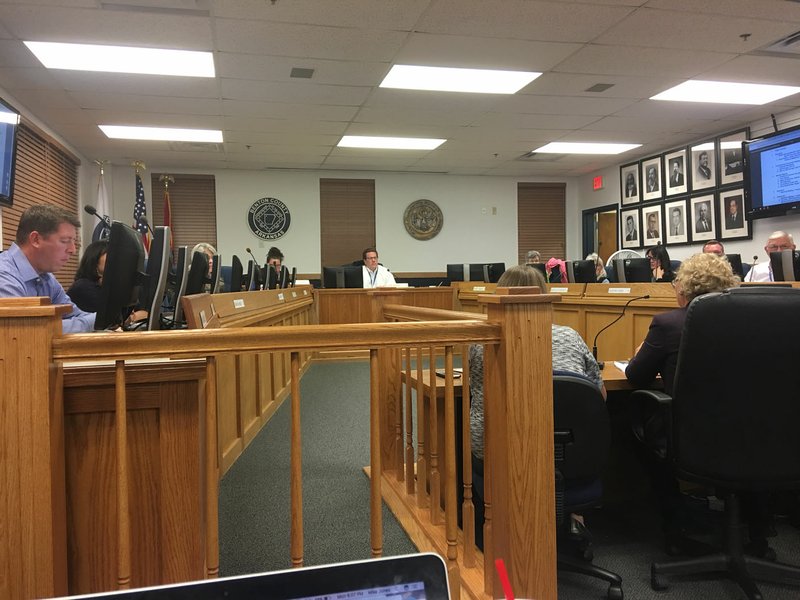 The Benton County Quorum Court is shown in Bentonville in this November 2019 file photo. - Photo by Mike Jones

A gun-sanctuary movement has been slowly moving across Arkansas, stirring a debate about whether it has any "teeth."

Scott County passed a "Bill of Rights Ordinance" last month saying that county employees could be fired or fined if they enforce gun restrictions that the county deems unconstitutional.

On Tuesday, Benton County will consider a similar ordinance and a resolution.

"It's unnecessary, it's redundant but it's needed," Griffin said. "We give comfort to the people who are concerned. That's part of our job."

"An ordinance with teeth keeps their feet to the fire," he said of county employees.

Scott County employees who violate Ordinance 2020-2 are subject to being fired and fined up to $500.

Davis said the coalition is a nonpartisan organization that works to "educate people on the Constitution, their rights and engagement."

He said the coalition hasn't been "pushing" counties to enact ordinances similar to the one approved by Scott County.

"We're not pushing it, although we're happy to see it and we'd be more than happy to help get it moving," Davis said.

The Arkansas effort is part of a national trend that has taken root in western states and in Virginia, in particular, where more than 100 cities and counties have passed some sort of Second Amendment sanctuary resolution.

"These resolutions have no legal force, and they're just part of an effort by the gun lobby to stoke fear," Virginia Attorney General Mark R. Herring said in December when he issued an official opinion on the matter.

"Localities and local constitutional officers cannot nullify state laws and must comply with gun violence prevention measures that the General Assembly may enact," Herring said in the opinion.

The Second Amendment sanctuary trend is in response to "sanctuary cities," where local police limit how much they enforce federal immigration laws.

The Second Amendment to the U.S. Constitution states: "A well regulated militia, being necessary to the security of a free state, the right of the people to keep and bear arms, shall not be infringed."

Article 2, Section 5, of the Arkansas Constitution states: "The citizens of this state shall have the right to keep and bear arms, for their common defense."

Griffin said he got help from attorneys to draft his county's resolution.

The result, he said, is a "carefully crafted document" that expresses all our rights under the U.S. and Arkansas constitutions, while emphasizing the Second Amendment.

"Since the Second Amendment is under attack, that's why we're calling it out separately," Griffin said.

When asked how the Second Amendment is under attack, Griffin said "red-flag laws" are causing concern across the country.

Also known as "extreme risk protection orders," red-flag laws are state laws that authorize courts to issue a protection order that allows police to temporarily confiscate firearms from people deemed by a judge to be a danger to themselves or others.

Seventeen states and the District of Columbia have passed some type of red-flag laws, according to the Pew Charitable Trusts. Arkansas isn't one of them. Gov. Asa Hutchinson has said any such law passed in Arkansas would have to balance protection with the right of due process of law.

Griffin said passing an ordinance might have been problematic for police.

"We did this as a resolution so our local law enforcement wouldn't be conflicted," Griffin said. "An ordinance is a command and a resolution is an opinion. Each day, somewhere in Arkansas, someone has a weapon taken from them. They are suspected of having broken the law and while awaiting due process, a weapon is taken into an evidence locker for safekeeping. This action of law enforcement, regarding someone in the commission of a crime, is not a violation of the Second Amendment."

"Like most rights, the right secured by the Second Amendment is not unlimited," wrote U.S. Supreme Court Justice Antonin Scalia in the 2008 majority opinion in District of Columbia v. Heller. "[It is] not a right to keep and carry any weapon whatsoever in any manner whatsoever and for whatever purpose."

In that ruling, the court confirmed the legality of "longstanding prohibitions on the possession of firearms by felons and the mentally ill or laws forbidding the carrying of firearms in sensitive places such as schools and government buildings, or laws imposing conditions and qualifications on the commercial sale of arms."

Instead, they could pass a resolution if they want to voice their support for the Second Amendment, Rainwater wrote.

"An ordinance is county law, and county law has to be lawful," Rainwater said Wednesday. "In Arkansas, a county does not have the lawful authority to speak as a sovereign and declare that it will not follow state law. A resolution is an appropriate vehicle for a county to use to declare its position on the law and to declare its intent to obey the constitution as written."

Rainwater provided a draft resolution for counties to consider, but he noted that neither the association nor its Risk Management Fund were taking a stand on the issue.

His draft resolution states that "unconstitutional laws are void" and that any legislative act that "plainly abrogates" the Second Amendment or Article 2, Section 5, of the Arkansas Constitution will be treated as void and unenforceable.

"I drafted this in an effort to provide our counties with an alternative to the Second Amendment sanctuary ordinances that are being proposed across the state," Rainwater wrote in the Feb. 6 letter.

Rainwater said his draft resolution was carefully worded so counties don't overreach their authority, but at the same time make it clear that the superiority of the Second Amendment will be upheld by the county over any laws that abrogate it.

In the Feb. 6 letter, Rainwater said he was providing "legal information and not legal advice."

"Please look to your county civil attorney for any 'advice' you need as to how your county should or will proceed on this (rather hot) political issue," he wrote.

Rainwater said he told county civil attorneys that his proposed resolution can be restated as an ordinance if that is their advice to their counties.

On Jan. 21, the Scott County Quorum Court passed a "Bill of Rights ordinance," in which the county declared that it wouldn't enforce any laws it deems unconstitutional, including laws restricting guns.

"Thus, Scott County is purporting to speak as a sovereign government, imposing its meaning of the Bill of Rights as a whole and declaring it's right to be 'free from the commanding hand of the state and federal government,'" Rainwater said. "Actually, Scott County is neither 'free from ... state and federal government' nor free to declare that it is free from state government. In fact, the Arkansas Constitution says just the opposite. Article 2, Section 12 says: 'No power of suspending or setting aside the law or laws of the state shall ever be exercised, except by the General Assembly.'"

Rainwater said the Scott County ordinance lists "unlawful acts" that apply in Scott County, including "any act forbidding the possession ... or use ... of any type firearm ... by citizens of the legal age" and "any act ordering the confiscation of firearms ... from citizens."

"This means, for example, any 18-year-old 12th-grader can have in his or her possession any gun at any school at any time in Scott County," he said. "This would violate state law.

"It also means, as another example, any court order directing the seizure/confiscation of any gun is declared void and unenforceable in the sovereign territory of Scott County," Rainwater said. "This means the Scott County legislature is declaring that certain state of Arkansas judicial orders will not be enforceable in Scott County.

"Taken literally, this would mean law enforcement in Scott County could not seize a suspected criminal's gun, even with probable cause. It means no warrant (an act ordering confiscation) could be issued by a court for the seizure of firearms of any citizen."

Rainwater said the Scott County ordinance exempts anyone who might in the future be convicted of a felony crime, which is everyone.

In his Feb. 6 letter, Rainwater wrote: "What we do NOT need is for a county to somehow act like it has the sovereign authority to declare its county version of the constitutional law and then ordain by county law that it will not enforce state or federal law to the contrary (which is what has already happened in one Arkansas county). This is because neither a city nor a county is sovereign. Counties are political subdivisions of the state. Cities are political creatures of the state."

Whitfield Hyman, a Fort Smith lawyer and Libertarian candidate for justice of the peace in Sebastian County, said he helped draft sanctuary ordinances that were submitted to Scott and Sebastian counties for consideration. Hyman said part of his draft ordinance was included in the ordinance eventually passed by the Scott County Quorum Court.

Hyman said he agrees that the Scott County ordinance that was passed "needs clarification generally," but he said Rainwater's "resolution solution is toothless."

"I have read Rainwater's letters, they are a very narrow interpretation of the ordinance," Hyman said in an email. "Scott County declared that certain laws will be void in their county. That section of the ordinance is 'puffery' in my opinion. Grandiose statements are often found in preambles. Just look at the preamble to the United States Constitution."

Hyman said Scott County's ordinance explains how it will "nullify certain laws" by restricting funds and prohibiting county employees from certain activities that the county deems to be unconstitutional.

"There is nothing 'sovereign' about a restriction of funding or a restriction on what your employees may and may not do while using county resources or on county time," Hyman wrote.

"The Arkansas Association of Counties seems to gloss over the fact that many state and federal laws are unconstitutional and are often declared unconstitutional by the courts every year," Hyman said.

In response to Hyman's comments, Rainwater said, "They can pass resolutions expressing their opinions but not ordinances declaring they will not follow federal or state law."

George Spence, who serves as the attorney for the Benton County Quorum Court, said he read the submitted ordinance. He drafted a one-page resolution, instead.

Spence said there were a number of problems with the submitted ordinance that he read.

"The Quorum Court is prohibited from doing certain things, and one of the things is it can't change state law," Spence said. "I was concerned that the ordinance purported to do that in some parts. So I was cautious for those reasons."

Rainwater said the ordinance submitted to Benton County requires a warrant in all searches and seizures.

"The proposed ordinance forbids 'any act ordering the confiscation of firearms ... from citizens,' which would mean, literally, that court orders can be ignored and that search warrants could not be issued for the seizure of firearms of any citizen," Rainwater said.

Spence said he drafted the resolution before receiving any letters from Rainwater.

"I thought it out, and that's what I thought would be appropriate," Spence said.

Spence said he'll provide his resolution, the submitted ordinances and all of Rainwater's documents to the Committee of the Whole, which meets Tuesday. The committee consists of the entire Quorum Court.