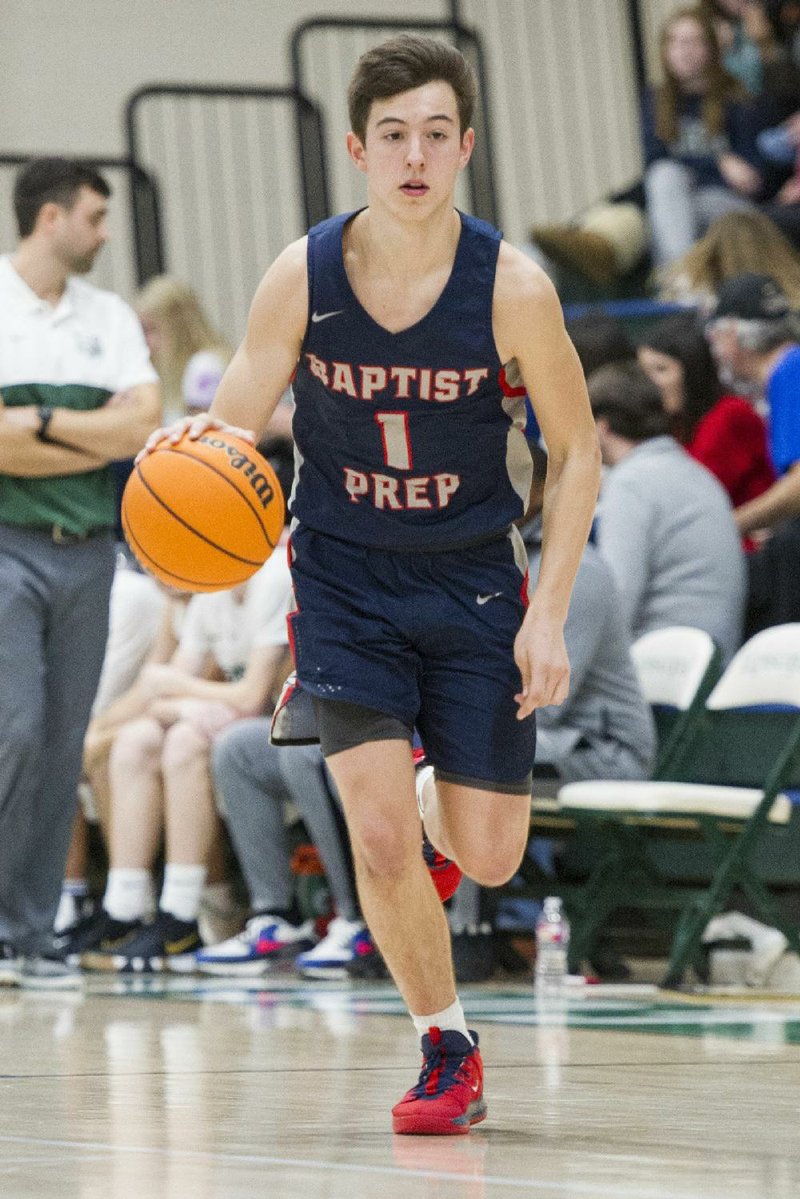 Baptist Prep junior guard Hunter Likens has helped the Eagles overcome the loss of Issac McBride, who is now at Vanderbilt. Likens is averaging nearly 17 points and four rebounds per game this season. (Democrat-Gazette file photo)

After losing the most prolific scorer in Baptist Prep history, Coach Steve Miller figured his Eagles would take a step back during the 2019-2020 season. Yet, he remained cautiously optimistic that the regression wouldn’t be a steep one.

“When you lose someone like Issac McBride, that’s huge,” Miller said of last season’s Arkansas Democrat-Gazette All-Arkansas Preps boys basketball player of the year. “We’re talking about a guy that averaged 30 points and five assists a game. … You’ve got to replace that somewhere. But I also knew we had six of our top eight guys back from a team that went to the state tournament and lost to the eventual champion Ashdown.

“We had some seasoned veterans coming back, but losing someone like Issac who did so much here, that’s tough to replace.”

Miller noted that McBride, who graduated last year as the school’s all-time leading scorer, would routinely draw two and three defenders, which allowed him to find teammates on the perimeter for open shots.

“Issac would drive, and Hudson would be waiting with his hands shot ready,” Miller said. “He’d go right up into his shot and most of the time, he’d knock it down.”

Likens has been knocking shots down all season for Baptist Prep (18-9, 12-2 3A-5), which is looking to make a return trip to the Class 3A state title game after barely missing out a year ago.

The junior said he knew his role would be different this year without McBride, but he acknowledged he had to get himself ready physically and mentally to prepare for it.

“I knew I had to work on basically every facet of my game,” Likens said. “Issac accounted for almost 70% of our points last year and did a lot of creating for all of us. I had to focus a lot more on creating my own shot while working on my handles in order to get more comfortable with the ball in my hands.”

This season’s numbers suggest Likens’ comfort level is right where it needs to be for the Eagles, who clinched their sixth consecutive regular-season conference title earlier in the week. The 6-2 guard is averaging nearly 17 points, 4 rebounds, 3 steals and 3 assists per game, but some of his better performances have come against elite competition.

Likens had a jaw-dropping 35-point, 10-rebound effort against Mills, currently ranked No. 2 in Class 4A, during the Jammin’ for Jackets Tournament in mid-December. The Comets threw multiple defenders at him, but his movement without the ball allowed him to get and hit open shots. Likens had 25 points in the second half alone in that 75-73 loss. He’s also had big outings against Joe T. Robinson, Maumelle and Little Rock Christian before continuing his torrid play against league teams.

“This year, teams are guarding him a little closer, and a lot of times are face-guarding him,” Miller said of Likens, who had 24 points in the regular-season finale Friday against Glen Rose. “He put in so much work over the summer just to get ready for those types of defensive schemes. He went from being just a spot-up shooter to a well-rounded player who can get to the basket or pull up for the medium-range jumper, which is sometimes a lost art.

“He likes having the ball in his hands, especially in the closing seconds of a tight ballgame when we need a big basket. He’s not afraid to take the shot when the game is on the line.”

Likens explained that accepting his newfound role as Baptist Prep’s go-to guy wasn’t limited to just him. The team in general, he said, had to bear new responsibilities.

“That’s actually something that we all were kind of worried about coming into the season,” he said. “Who would we have creating shots, would guys force things, would we not trust each, who’d score the point? … Those were some of the concerns we had. But I was surprised about how we overcame all of that.

“Of course, we struggled some early, but we played a pretty tough schedule. But when conference [play] rolled around, we started to really accept and play our parts. When we play as a team, we’re really hard to beat.”

Four of Baptist Prep’s five starters are seniors, and according to Miller, each has had explosive games. The luxury of having that kind of talent willing to play in a team-first system has made the Eagles a force.

“One of our opponents’ coaches said that sometimes in our conference, you have to guard two or three guys. But with Baptist, you have to guard all five,” Miller said. “We’ve had different leading scorers. A lot of times it’s Hudson, but it may be Brooks Spoon one game, Jeremy Elmquist another, Andrew Evans, D.J. Townsend. … It gets spread out.”

The Eagles are a little off pace of the 30 victories they’ve averaged over the previous five seasons, but many didn’t expect Baptist Prep to reach that tally anyway without Mc-Bride. Likens expressed that those doubters added fuel to the team’s fire before the year even started.

“We basically returned four starters, and I would hear little things like, ‘Without Issac, Baptist is really nothing,’ ” he said. “No one really thought much of us in the preseason, and that put a huge chip on our shoulders. I honestly felt that we’d be good enough to be where we are right now, which is conference champs.

“That’s why we worked as hard as we did in the summer. We’re not a cocky bunch, but we’re confident because we know what we’re capable of doing. We want to get out there and show everyone that despite losing an great player like Issac that Baptist Prep is still one of the powerhouses in 3A.”

Likens at a glance

NOTEWORTHY Averaged 26 points during a three-game run at the Jammin’ for Jackets Tournament, including 27 and 35 in back-to-back outings against Little Rock Fair and Mills. … Knocked down 9 three-pointers vs. Mills. … Scored 16 points in his first state tournament game as a sophomore.