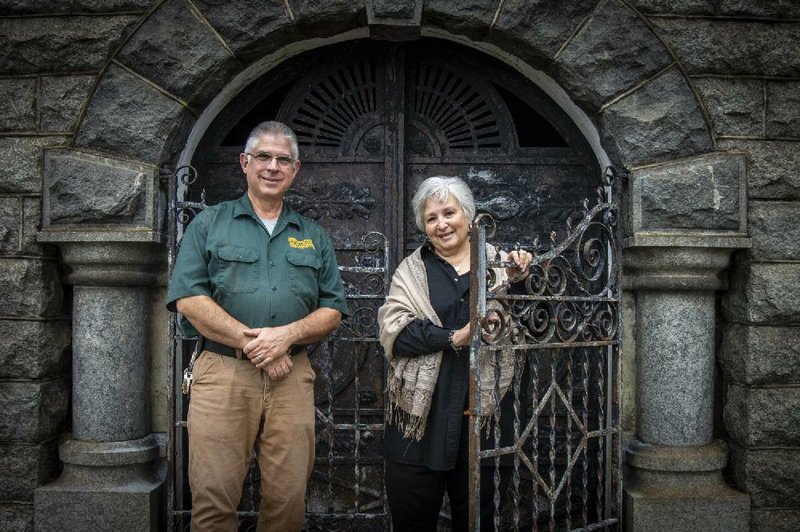 John Rains, the sexton of Oakland & Fraternal Historic Cemetery Park, and Linda Howell will lead March tours through the 158-year-old cemetery. Oakland is the state’s largest municipal cemetery in the state and the final resting place of thousands of Confederate and Union soldiers. (Arkansas Democrat-Gazette/Cary Jenkins)

When Linda Howell gives her annual haunted tours of Little Rock, the same question pops up from tourgoers. Why doesn't she include a nighttime visit to a cemetery?

So when Howell -- who runs Haunted Tours of Little Rock -- participated in a tour of Oakland & Fraternal Historic Cemetery Park, a light bulb went off. Why not offer nighttime tours of the 158-year-old cemetery as a fundraiser?

Howell volunteered her time at Oakland -- mainly organizing the office -- as she began making plans for a nighttime tour. After several meetings with the Oakland Board of Directors, Howell and the cemetery's sexton John Rains were given the go-ahead to schedule the tours.

"I did not want to be paid for my services because I enjoy helping others and it's fun to see them get excited," says Howell, who also is the author of Haunted Little Rock.

Howell is using her expertise in the tour business to help Oakland raise money that will be used for the historic restoration and preservation of headstones.

The Lantern Light Tour will be held each Saturday in March. The cost is $20 per person and all of the proceeds go to the project.

"It's going to be all about the history of the cemetery," says Howell, who has relatives buried at Oakland including two great-great aunts -- Bernie Babcock and Grace Hull -- and their mother Lottie Smade.

"It's going to have a scary feel to it anyway because that cemetery is as black as a bat at night," Howell says. "So all of these people who have wanted to be in a cemetery at night are going to get the scare that they want to have."

The cemetery is made up of 63 acres and the only outdoor light is near the sexton's house. Howell and Rains chose March because it will be dark by 6 p.m.

"Oakland & Fraternal Historic Cemetery is a well-kept secret and I want to put it on the map," Howell says. "Its 63 acres makes it the largest municipal cemetery in the state and the second oldest next to Mount Holly."

Oakland was established in 1862 when the city of Little Rock bought 160 acres to bury Civil War casualties. Mount Holly Cemetery dates to 1843 and is made up of four city blocks in downtown Little Rock.

Over the years, the acreage at Oakland was divided into seven cemeteries. The cemeteries have seen more than 62,000 burials since it opened, according to the Central Arkansas Library System Encyclopedia of Arkansas.

Confederate soldiers were buried in Oakland during and after the war. A one-acre plot holds a mass grave of about 900 soldiers who died in Little Rock hospitals in 1863. Another section is home to 1,797 Confederate soldiers. Also in 1863, Union troops set up an encampment in the cemetery and began burying their dead.

By 1888, a number of black fraternal orders petitioned the city of Little Rock for land at Oakland. The city granted their request and gave the societies 14 acres. In 1893, their burial ground was named Fraternal Cemetery.

For the tour, Rains has installed wooden benches atop a trailer that is normally used to transport an excavator to gravesites. The trailer can hold up to 25 tourgoers. The first stop on the tour will be the resting place of Mary Dodge. She befriended David O. Dodd, who was later hanged as a spy by the Union army. He has been called the "boy martyr of the Confederacy."

Dodge later married William Whipple, who became mayor of Little Rock. Despite her prominence, Dodge's grave was not marked. She now has a monument, thanks to Rains.

The tour will also include a visit to a large mausoleum. Howell will tell the guests "what it was like to die in 1863," around the time embalming fluids were coming into use. She will tell how sitters would watch over the bodies because "a lot of people who were thought to be dead really weren't. They were suffering from lead poisoning."

Another stop will be to see the Weeping Angel monument which features an angel leaning over a tombstone. Her feet are visible, but she is missing her toes. "That's what you call desecrating a grave," Howell says with a scowl.

With the use of flashlights, tourgoers should be able to spot gifts left on monuments and tombstones. Pennies symbolize that someone has visited the site. For military veterans, a nickel means the visitor trained with the dead. A dime means they were stationed together. And a quarter represents the visitor was present when the person died.

Other items to look for include feathers, which usually represent the ascent into Heaven, and crystals and stones, which sometimes also represent that a person visited the site.

For those who take the tour, Howell recommends wearing comfortable shoes and warm clothing and bringing a flashlight and camera. Ghost meters are optional. 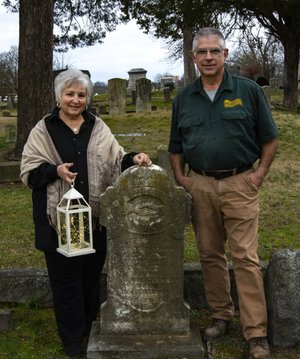 Linda Howell and John Rains will take visitors on nighttime tours of Oakland & Fraternal Historic Cemetery Park each Saturday in March. The Lantern Light Tour is a two-hour tour to raise money for the historic restoration and preservation of headstones. (Arkansas Democrat-Gazette/Cary Jenkins)