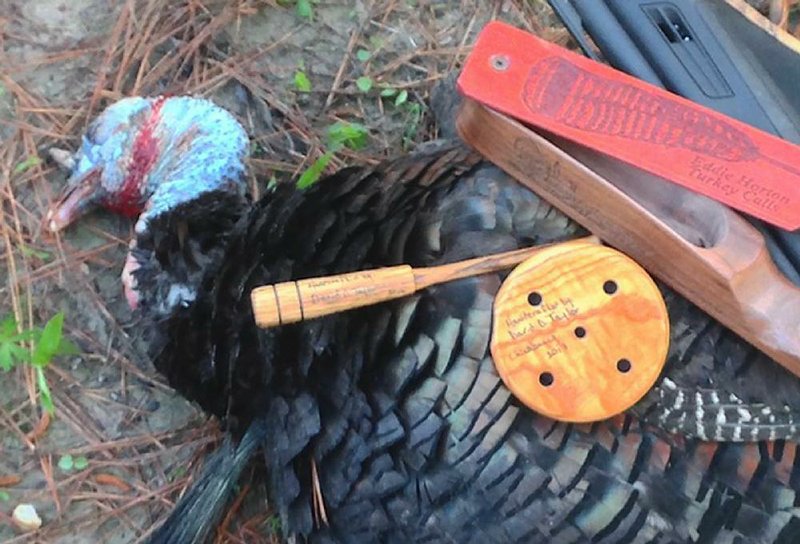 A David Taylor slate call and an Eddie Horton box call helped the author take a gobbler in 2017 that he nicknamed “The Lumberjack.” (Arkansas Democrat-Gazette/Bryan Hendricks)

If you immerse yourself in something long enough, you will amass a big collection of souvenirs.

Gearheads acquire tools, for example. They have a hierarchy of tools, too. A gearhead might let you borrow a Craftsman wrench, but don't dare touch the Snap-Ons. Shotgunners have a gun for every occasion, as do deer hunters and target shooters.

Metallic cartridge reloaders take acquisition to stratospheric levels, but nobody compares to a turkey hunter in terms of pack-ratting. We acquire decoys and ground blinds, caps with facemasks and even gloves for all occasions. You have to have the right camo, even if your vest has a different camo pattern.

Vests? We've got them, even though most hunters only ever use one. We buy them thinking it will be better than the one we have, but it seldom is. The new one doesn't have enough pockets, or its pockets are not arranged right. The box call pocket isn't long enough for that one call that you don't use, but you carry it just in case. You can't give vests away because all of your other turkey hunting buddies are loyal to their vests, too.

[Video not showing up above? Click here to watch » https://www.youtube.com/watch?v=MI6XiR90AI4]

Above all, turkey hunters love to acquire calls. There are so many varieties. Some are versatile, and some are specialized. They are artful, and whenever you use one to kill a turkey, it becomes priceless. I use diaphragms, pot calls and wingbone calls, but box calls are my favorites.

It is important to me to use calls made in Arkansas by Arkansas craftsmen to hunt Arkansas turkeys. Because I believe Arkansas-made calls are superior to all others, I use them to hunt in other states, too. However, my collection started with an H.S. Strut Old Timer from Walmart. It is an assembly line call that was probably made in China, but it sounds great. At the 2006 Arkansas Big Buck Classic, I acquired two North Carolina calls. They also are of a generic design, but I particularly like the one made of American chestnut because of a reference to chestnut in the book Quest for the Limit, written by my old friend Mike Marsh.

I have also called up turkeys with a Furr's Custom box call constructed of walnut and maple that was made in Scranton. The Furr's call is No. 8 of 12 made to honor the late Gary Watts, who in 2015 became only the sixth person to be inducted into the Arkansas Turkey Hunters Hall of Fame.

The 12 limited edition calls were made for an auction at the 2016 Arkansas National Wild Turkey Federation annual awards banquet in Little Rock. Each call was auctioned separately for $200-$225. In addition to the call, each winner got a poker chip with the same number as the call to be entered into a super auction for a Weatherby Orion over/under 12-gauge shotgun. One chip was drawn from a bucket at the end of the auction, and the owner of that chip won the shotgun.

The auctioneer selected me to draw the winning chip from a bucket. It was No. 8, held by Jim Wells of Hamburg. Wells handed me the call and shouted, "You can have the call. I got the gun!"

In 2011, I bought and reviewed three box calls made by Bill Rhodes of Sheridan. Rhodes made me a special call with my name and date inscribed on the bottom. It's a walnut box with a dual chamber. I bought another one similar to it made of cedar. Their tone is from another dimension, and they figured prominently in the demise of a few mature gobblers.

Rhodes doesn't make that call anymore because of the difficulty in precisely cutting dual slots in a chunk of wood. He gets irritated whenever I write about them because he gets inundated with requests.

Rhodes specializes in making calls from non-traditional woods. I have Rhodes calls made of mahogany, chinaberry and zebra wood. Another is made of chinquapin, an eastern variant of American chestnut that went virtually extinct from the chestnut blight. Rhodes says his smallest cedar box is the most versatile.

I also have a collection of calls made by Eddie Horton of Camden. His patented design covers every band of the sonic spectrum. He also uses uncommon woods like purpleheart, bloodwood, acacia, bois d'arc and mahogany. My favorites are his laminated calls, especially a discontinued model called the "Arkansas Razorbox." I call mine "Corliss" in honor of Corliss Williamson, who played center on the Arkansas Razorbacks' 1994 NCAA championship team. His nickname was "Big Nasty" because of his aggressive play in the lane and his uncanny ability to score against bigger players. The Arkansas Razorbox, with its nasty, raspy tone, is the center on my turkey calling team.

Horton taught me how to purr a box call with one hand. The technique enables me to manipulate pitch and direction by working the call next to my thigh at ground level or even behind my back. The modulations can disarm the most reticent gobbler's defenses.

With their distinctive tonal qualities, using a Rhodes box and a Horton box is a devastating one-two punch.

A prized collection of Arkansas-made pot calls also has an important place in my arsenal. Some have slate surfaces, some have glass, and some have copper. The first in this collection was a Premium Game Calls Aluminum Cutter made by Patrick Frachiseur of Dierks, followed by the glass-top Diamond Cutter.

My two favorites were made by David Taylor of Sheridan. The frames are made of chinaberry. One has a slate surface and the other has copper. Taylor's custom cocobolo strikers are the secret to the calls' incomparable range and tone. I never hunt turkeys without one.

Grant Westmoreland of Sheridan is one of my turkey hunting mentors. In 2017, he started making pot calls and sent me No. 8, making a nice mate for my No. 8 Furr box call. Westmoreland's slate is a simple design made of Kansas walnut, and it sounds beautiful.

You might have noticed the strong Sheridan theme in this collection. I don't know what is in the water there, but those folks certainly know how to talk turkey. 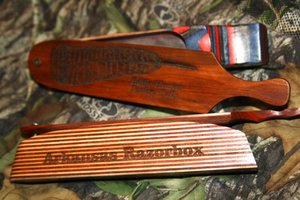