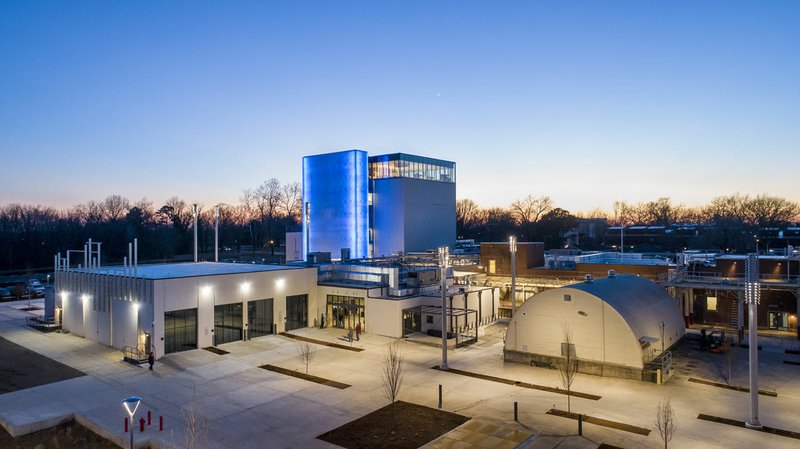 The Momentary is a 63,000-square-foot venue in a former Kraft Foods cheese plant in downtown Bentonville. The venue seeks to offer the community a gathering space with outdoor experiences, culinary activations, a rooftop bar and, of course, contemporary art and festivals. (Courtesy Photo/Dero Sanford, courtesy of the Momentary)

The inaugural TIME BEING festival will be the very first event to activate the halls of the Momentary -- engaging the community and introducing the public to the brand new space along with the exhibition "State of the Art 2020." (More on Page 7.) The performance festival will reflect the type of programming Northwest Arkansas can expect year round from the new multidisciplinary performing and visual arts center, and will serve as a triumphant grand opening celebration for the Momentary's debut.

"A lot of people feel like they have an outsider perspective, but honestly, once the doors open, everyone's an insider. Everyone's part of it," enthuses Pia Agrawal, the Momentary's performing arts curator. Before joining the Momentary team, Agrawal spent five years at an interdisciplinary arts center at the University of Houston where she produced a yearly festival, and prior to that, she oversaw the production of a 16-day festival in Philadelphia.

Announced in 2016, the Momentary is under the same nonprofit as its sister organization, Crystal Bridges Museum of American Art, and will expand Northwest Arkansas' art offerings through its flexible 63,000 square feet of space. The venue has re-purposed the former Kraft Foods plant at the corner of Sixth and E streets in downtown Bentonville and houses multi-use performance spaces, galleries, a restaurant, a rooftop bar and three studios for artist residencies, among plenty of other nooks and crannies to explore.

"They occupy all of the different spaces in the building, and we really wanted to create a festival that would have that vibe -- that would allow people to see what the building is capable of."

For its opening weekend, the Momentary will be teeming with performances inside and outside, most family-friendly and accessible to all.

In the interest of keeping everything running smoothly, and ensuring the most enjoyment possible, the Momentary will require timed entry tickets for the opening weekend. After TIME BEING wraps up, the venue will go back to free and open admission.

Check out the map of the space on Page 10 to get a feel for where to park, eat, see and do all the things. Keep reading on the next few pages to learn more about the variety of the lineup for the inaugural TIME BEING festival.

"The thing that makes a festival a festival is not just the work, but the spaces between," Agrawal opines. Getting to know the new building, seeing the exhibition, taking a break for food and drink -- all these offerings are what will contribute to the social experience on top of the actual performances, Agrawal explains.

"We're really excited [that] there's so many different motivations people are coming into the Momentary with. All of that overlap of different audiences with varying intentions, that's what creates the social atmosphere of a festival."

Get To Know The Performers

Agrawal and the Momentary staff are thrilled to present all the performers coming to opening weekend. But here, Agrawal points to two acts she is particularly excited for Northwest Arkansas audiences to experience.

"The participatory nature brings something that's nice to the festival and touches on that social element that we're talking about," Agrawal reveals.

Spokaoke -- like spoken karaoke -- invites people to perform famous speeches from across history, literature, movies and politics just as they would perform a karaoke tune in a bar. Dorsen is a theater director and writer, getting her start through the Yale School of Drama. In 2018, she was awarded a Guggenheim Fellowship and in 2019 was recognized as a MacArthur Grant Fellow for her work pioneering a new genre of theater dramatizing the complex relationship between humans and machines.

Q. You have an impressive background in traditional theater. But some years ago, you say you happily left it all behind. Did traditional theater fail you in some way? What did it not accomplish that you were wanting to get from it?

Dorsen: I wanted to explore other methodologies, other ways to start projects -- start with content, bring a group of people together to see what we wanted to make, more in a devised model. But I didn't want to start a company.

And then the other thing that was on my mind at that point was I felt that the way that most story telling, most text-based theater, was approaching the world was very much about issues. And I kept thinking there's got to be another way to approach making theater that's less about issues and more about activating curiosity on the part of the audience -- that's more about creating an event that produces ideas as opposed to discusses ideas.

Q. How did you choose the speeches? Was there a formula about era, gender, race or just things that moved you?

Dorsen: There's no formula, exactly. I started the project thinking, let's look at a list of the great speeches of the world -- the ones that almost function kind of like pop songs in our imagination because at least the main line is so well known. You can hear a voice, you can hear the intonation. Then, I started looking further afield, and I was thinking about speeches that had changed something, that had been pivot points in some way.

I've tried to keep it a little bit up to date, so I recently added Greta Thunberg, I added Ta-Nehisi Coates speaking to Congress about reparations, I added something from the impeachment trial just a couple of weeks ago. So that's also been fun to think [about] what examples we have of really powerful rhetoric.

Q. What do you hope happens to/for the speakers? And to/for the audience?

Dorsen: It's a piece that is created by all of us together, on the night. So, sometimes it's really raucous, almost like a regular karaoke bar where people are singing joyfully off key but everyone's having a great time. And sometimes, it becomes a much more sort of "thinky" experience. And some end up shifting in the same evening between those two modes.

I like it a lot when the collection of speeches that people choose produces some meaning. Like, you start thinking about how many different ways people invoke the idea of justice, and that the same word means so many different things or can be used by so many different groups. You start hearing resonances and echoes between speeches of different eras. Some rhetorical flourish that Plato ascribes to Socrates gets picked up and used by some 20th century politician trying to rally the troops to fight Nazi-ism. So these links you can make between different movements, between different speakers and different periods of history are really interesting. You learn something about manipulation, persuasion, how language produces emotion.

Performer, sound designer and pastry chef Kristin Worrall will present the world premiere of a performance piece during the TIME BEING festival. Worrall has been working with culinary students in the Northwest Arkansas area, including students at Brightwater, and University of Arkansas students in the history department to develop the piece. "The Recipe" will have the feel of a live cooking show, while incorporating the Momentary's history as a cheese processing plant, Agrawal shares. "She's very quirky, very funny."

Q. How and where and to whom did you pitch the idea for a test drive? And what was the response, both to the idea and to the performance?

Worrall: The first version I ever did of this show was a 10-minute showing for CATCH performance series in New York City, which features multi-disciplinary artists' excerpts and works-in-progress. It was a great opportunity to test out the idea of a live cooking show in a theater setting and see if it had any legs. It was a great success, and so Andrew Ondrejcak, my director on this project, and I decided to collaborate and do a full version of "The Recipe" a few months following.

The response was pretty great, I'd say. I think the fact that food is actually being prepared in real time on stage and that there's this sort of dual form to the piece -- it's both a cooking demonstration and theater -- feels refreshing to an audience. There's built-in drama when you're cooking live!

Q. How does food embody culture?

Worrall: Well, I like to say -- everyone eats, right?

On a pragmatic level, food showcases region, access, economics, season, trends, techniques, family unit/dynamics (and that can take all forms!), history, religion. ... But food also embodies compassion. Making and sharing a meal with someone is one of the most fundamental ways to form bonds and relationships and to learn about another's experiences.

I grew up in a very specific, American, suburban setting -- and so the food I make and eat is reflective of my very specific upbringing and training. I recognize that is limited! But it's through opportunities like this one -- to be able to travel here to Bentonville from my home in Brooklyn, N.Y., and make food -- that I'm able to contextualize the region and place to purposefully highlight why I'm making this food in this space. In the Momentary -- a building that used to be a cheese processing plant! In the form of a theatrical cooking show! Preparing and sharing the food I'm making on stage is a reflection of the gratitude I have for this opportunity.

Q. Is there an over-arching moral or meaning you hope the audience will take away with them?

Worrall: Each version of "The Recipe" that I do is different; its content and themes are contingent on the time, place, season and in this case, the building! I think the only thing I can truly hope for is that people can take the performance and experience it as it happens, in real time, to celebrate the opening weekend of the Momentary. I hope we can all take joy in the fact that this exciting new space will be home to a-many creative happenings to come. 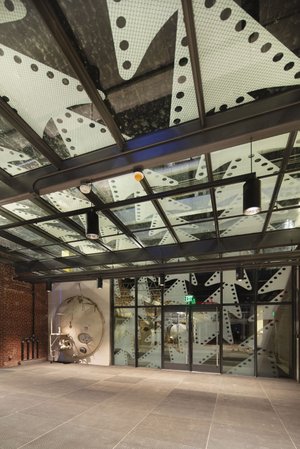 On the cover: The Momentary, a multi-disciplinary performance art space and sister venue to Crystal Bridges Museum of American Art, opens to members Feb. 21 and to the public Feb. 22. Performance art festival TIME BEING will be the first event at the new venue, along with half of the temporary exhibition "State of the Art 2020." (Courtesy Photo/Dero Sanford, courtesy of the Momentary)