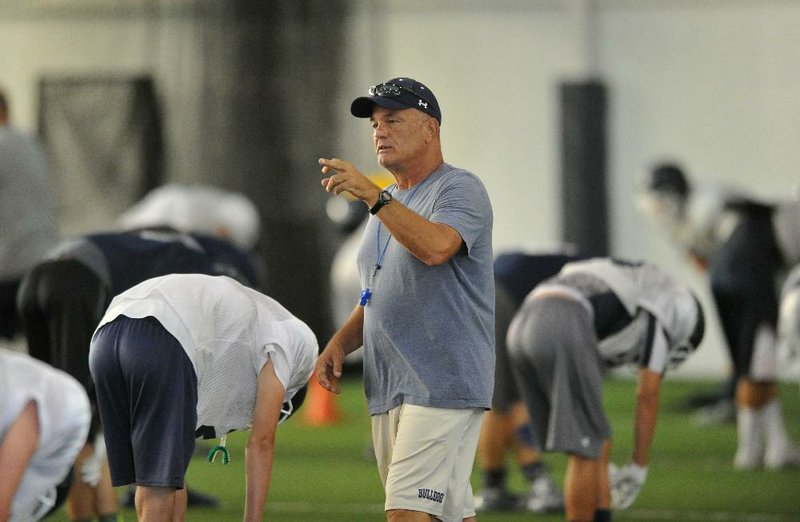 An Arkansas high school football coaching giant is leaving his post for the SEC.

Rick Jones, the longtime football coach at Greenwood, announced his resignation on the school district's Facebook page Friday after 16 seasons with the Bulldogs.

Jones is expected to be hired as early as Wednesday as a senior consultant at Missouri under new Coach Eliah Drinkwitz, who is an Alma native and Arkansas Tech University graduate. Drinkwitz was hired at Missouri in December from Appalachian State.

During his tenure at Greenwood that began in 2004, Jones posted a 185-26 record and led the Bulldogs to eight state championships, which are tied for the second most all-time for a head coach in Arkansas with Kevin Kelley at Pulaski Academy and Frank McClellan at Barton. Wilson Matthews won a state-record 10 state titles at Little Rock Central.

Jones met with Greenwood players and coaches Friday afternoon to tell them he was leaving the program.

"It was rough. But I made it through," Jones told the Arkansas Democrat-Gazette in a telephone interview. "During the course of the day, I talked to our staff and our administration. It was hard. They care a lot about Greenwood football. They've meant a lot to me.

"It's a great bunch of kids. They've given us everything we've gotten. My one regret is that I don't get to see it through. The seniors have been with us a long time. I've known them a long time. I hate that I'm not going to finish with them.

"I just know that it's the right time. I'm excited to learn and grow as a coach and see how they do it at their level."

Greenwood Athletic Director Dustin Smith expressed his admiration for Jones for the work he has done with the Bulldogs on and off the field.

"As you can imagine, with the success he's had, it's something you don't want to happen," Smith said of Jones' departure. "It's bittersweet. We're happy for him, but we're sad for Greenwood schools."

When Jones was hired in 2004, Greenwood had won one state championship in 2000 under Ronnie Peacock. Jones turned the Bulldogs into a high school football dynasty. The run included players such as future University of Arkansas quarterbacks Tyler Wilson and Connor Noland, and wide receiver Drew Morgan.

Greenwood also had one of the state's longest winning streaks, reeling off 50 consecutive games from 2011-13 before losing in the Class 6A semifinals to Pine Bluff.

"He's one of the greatest in the state ever to coach high school football," Smith said. "The run that he's had, it all speaks for itself. He's won 180-something games and eight state titles.

"But the impact is far greater than wins and losses. He's invested in our community. He's invested in the lives of young men and women here. I don't know how we can ever express how grateful we are for what he's done."

The relationship between Jones and Drinkwitz goes back more than a decade.

Jones said he got to know Drinkwitz through Auburn Coach Gus Malzahn, a Fort Smith native, and has followed his career. Drinkwitz, 36, led Appalachian State to a Sun Belt Conference regular-season title in 2019 after serving as an assistant at Auburn, Arkansas State University, Boise State and North Carolina State.

"I've been at it for 42 years," said Jones, a graduate of Harding University in Searcy who began his coaching career in 1976. "I try to cultivate with smart people. I try to learn from smart people. Coach Drinkwitz is a bright guy.

"I decided that I was going to continue to coach high school football, I'm never leaving here [Greenwood]. It's the best job in America. It's the best kids and best coaches. But I would leave if I can go somewhere and learn. That's been my thought process."

The new position at Missouri for Jones, which is an off-the-field position, is something Jones said he is looking forward to. The 2020 season will be the first time in his career he won't be coaching on the field.

"The thing about it is that there's a lot to coaching outside of the field," Jones said. "Instead of being out on the field teaching a kid how to throw a football or run a route, I can pat a kid on the back and encourage them if he's having a problem or an issue. I can be an adviser or a mentor.

"I want to help the kids and help Coach Drinkwitz any way that I can."

Smith said Greenwood had no timetable on when the coaching vacancy will be posted.

"I wish it could be easy to say we're looking for this coach and this person," Smith said. "There's a lot to weave through. We want the best fit for Greenwood schools." 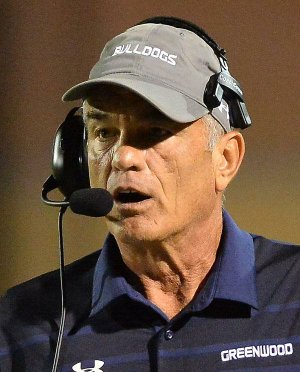 Greenwood head coach Rick Jones is shown in this file photo. (Special to the Democrat-Gazette/JIMMY JONES)